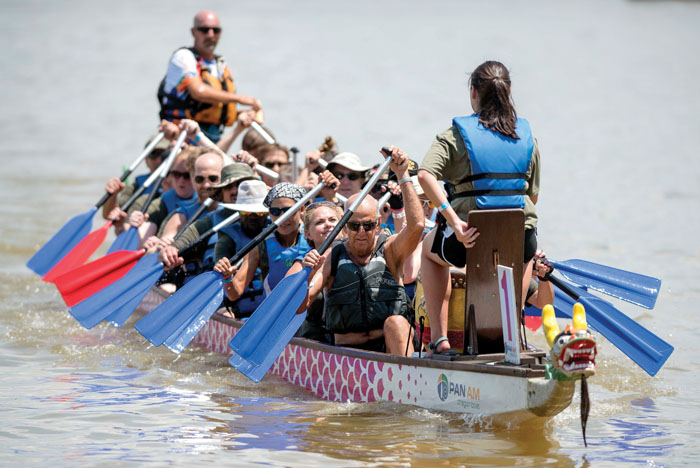 HIGH ROCK LAKE —  For three races Saturday, Terry Hunt manned the front of a dragon boat with Sharon Jones as they set the pace for their VA Warriors team.

“The two in the front are the heartbeat of the boat,” Hunt said, repeating what a trainer had told him during a practice Friday.

So Hunt and Jones maintained the synchronization for the other Warrior paddlers while they also relied heavily on the rhythm and cadence coming from drummer Hannah Jones.

Hunt, 72, says he and other paddlers do pretty well for two-thirds of a dragon boat race, as they give it everything they’ve got.

“That last one third is when you’ve got to find what you’re made of,” he said.

Hunt is made of a lot. He lost his sight in 1997 from retinitis pigmentosa, a genetic disorder that leads to blindness. But the Lexington resident has never seen being blind as an excuse for sulking or sitting around.

“I think sometimes I have been fortunate to lose my eyesight,” he says.

Hunt knows how that sounds to people, but it’s his way of saying that going blind forced him to take chances. “I’m adventurous,” he says.

A half-dozen years ago, Hunt started kayaking with Team River Runner, a national organization supporting and encouraging military veterans and their families to go kayaking for healing and peace.

Terri Everett, a rehabilitation outpatient specialist for the blind at the VA’s Kernersville Health Care Center, got him started. She will be his coach when the pair go to the VA Summer Sports Clinic in San Diego in September.

In San Diego, Hunt plans to take his shot at things such as kayaking, sailing, cycling and rock climbing.

Everett also has been experimenting with a new device — something fitting much like a life vest — which a blind kayaker can wear, and sensors on the vest tell him in which direction to paddle.

The sensors are controlled by a remote control by the sighted kayaker behind him.

“We tried this device on an open paddle at High Rock Lake July Fourth,” Everett said. “I was able to guide Mr. Hunt without any verbal commands. It was an incredible day.”

For Hunt, it’s just another example of how technology is making his life better. He has embraced it. He says he emails, texts and uses a telephone and computer as well or better than most people — all thanks to “technology I did not know existed.”

He loves woodworking, and he depends on a talking tape measure to continue his hobby. When he meets with Everett at the outpatient care center in Kernersville, “technology is what they’re teaching me,” Hunt says.

Hunt is a U.S. Army veteran. He worked in the furniture industry for nine years, then joined a tooling business, gradually becoming a partner.

A German company bought out his business in 2000, but he stayed on to help with the transition until 2003. Hunt and his wife have a boat and place on the Swearing Creek side of High Rock Lake to which they like to escape.

Hunt said he thinks when you lose one sense, such as your sight, another sense typically becomes stronger. For him, it’s his hearing, which is terrific for a 72-year-old man.

Does he have any words of wisdom, based on what’s he’s been through?

If you’re sitting on the couch, Hunt says, get up and start doing something. Maybe even find a dragon boat to paddle.