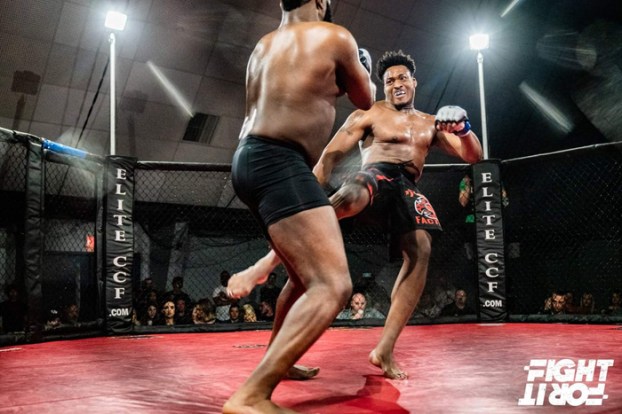 GRANITE QUARRY — When your fight name is “Kid Dangerous,” you had better not be average.

Kid’s coach, Scott Clawson, 1988 East Rowan graduate, owner of a Granite Quarry gym called the Fight Factory and black-belt holder in the martial art of Brazilian Jiu-Jitsu, insists he has the talent to live up to his name.

“I’ve been training guys for more than 20 years,” Clawson said. “This is, by far, the best Mixed Martial Arts (MMA) prospect I’ve ever worked with.”

“Kid Dangerous” was born with a reasonably distinctive name — Chad Yard. A native of the Caribbean island of Barbados, Yard arrived in the United States at age 10 and lived in several states.

The 6-foot-3 Yard graduated from Walkersville High in Maryland and went on to play basketball for Hagerstown Community College. Pfeiffer University signed him to a scholarship in the spring of 2016.

“I looked at several schools in North Carolina, but Pfeiffer was the most interested,” Yard said. “Basketball didn’t really work out for me for me at Pfeiffer, but I focused on my schoolwork and did well.”

Yard is a smart guy. He majored in biology. He earned his degree from Pfeiffer in May.

But that diploma may not come into play for a while. About a year ago, he discovered he had the skill set and the dedication to prosper in MMA.

“Growing up, my favorite video games weren’t basketball or football, they were the MMA games,” Yard said. “I’ve always had a love for the sport, I just wasn’t sure how to pursue it. When I was a senior at Pfeiffer, I looked at some karate schools first, but then I found Coach Clawson and the Fight Factory online.”

Clawson was intrigued immediately by Yard’s potential because he is large and quick. When he arrived as a raw product as the Fight Factory, he was a muscular, 230-pound guy who moved like someone 50 pounds lighter.

“As a former basketball player, Chad has been able to make a quick transition to MMA,” Clawson. “He’s not only strong, he has ideal body control and flexibility. He’s still a baby in this sport, still has so much to learn, but he has the work ethic to go as far as he wants to. What people don’t understand is that the fights aren’t the hardest part — the hard part is the grind of constant training — but Chad enjoys the training.”

Yard received his fight name from Carmen Garcia, one of the instructors at the Fight Factory. She christened him in Spanish. He requested the English translation. It was “Kid Dangerous.”

Armed with that new alias, Yard, who turns 24 in August, made his debut on a 14-bout MMA card in March in a Hickory event billed as “Fight For It 5.”

“You’ve trained and you know things, but it’s hard to remember anything when you step into that cage for the first time and your adrenaline is going right through the roof.” Yard said. “Then you realize that guy across from you is basically trying to kill you, and your mind and your instincts start telling you what you have to do in order to survive.”

Yard shakes his head about his debut. There was more flight than fight during his first minute or so in the cage.

“I stayed away from him at the start, but then I figured out I could end the fight whenever I wanted to,” Yard said.

Yard won by TKO in the second round when the referee stopped the fight after a series of unanswered strikes by Yard.

Yard returned to the cage in April for his second scrap as part of a six-bout card at the Rowan Fairgrounds that was promoted as  “Rowan County Fight Night 2.” Yard won by submission in the second round.

“No flight,” Yard said with a smile. “This time I just stayed right there and we went at it.”

So Yard’s amateur record is a modest 2-0, but he’s getting a lot of attention and creating buzz for a guy who is 2-0.

“I’m getting a lot of calls about him from promoters who want him on their fight cards,” Clawson said. “He’s got a lot going for him because he projects a good image. He’s intelligent and he’s articulate.”

Yard has charisma. He could be a fan favorite. He’s confident, without crossing the line to arrogance.

His third fight is upcoming on Aug. 10 when he’ll return to the Rowan Fairgrounds for “Rowan County Fight Night 3.” He’s scheduled to fight Brandon Walker-Ali (2-1).

While he’s still a rookie, Yard is ranked second in North Carolina out of 22 amateur heavyweights. He’s ranked 31st out of 319 in the Southeast.

He looks like an NFL strong safety, but he’s continuing to sweat pounds through hard training. He fought at 223 pounds in April, but he plans to be at a svelte 205 for his next trip to the cage.

Yard supports himself as a bartender in Charlotte, but the hope is that he’ll be able to make a splash and some serious money in MMA once he turns pro.

“I know I need more experience and more fights before that happens,” Yard said. “But that’s the goal.”

Brazilian Jiu-Jitsu has taken Clawson all over the world as an instructor — to Iceland, Ireland, Thailand and The Philippines, among other places — but he may have found his most promising student right in his backyard.

“We’re all rooting for Chad because he’s part of our family at the Fight Factory,” Clawson said. “Anyone here, from 5 to 60, he’s willing to help them in any way he can.  People should come out to see him fight on Aug. 10. If they’ve never seen MMA, they’ll be surprised. The energy of an MMA event —  it’s like being at a Duke-Carolina basketball game.”