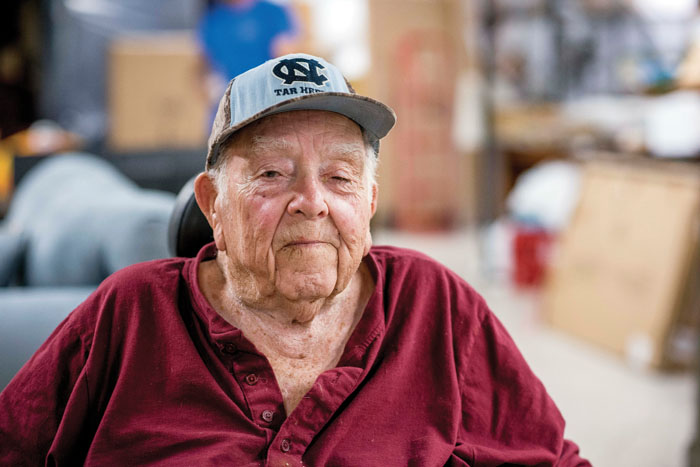 JON C. LAKEY/SALISBURY POST Bill Gibbons recounts his baseball career as a youth and adult. Gibbons, 91-year-old, played on the 1944 and 1945 Legion team in Salisbury. Gibbons says he is the only remaining member of those teams. Spencer, NC 7/24/19

“That mitt was top of the line,” said Gibbons, who grew up on a farm in Woodleaf. “The best money could buy.”

But Bill’s father loved baseball. So did Bill.

Gibbons has needed the assistance of a walker for every step he’s taken during the last seven years, and his neck and head don’t swivel as smoothly as they once did. But aside from that, he’s content.

He has the heart rate and blood pressure numbers of a healthy 35-year-old. He also has Major League Baseball, live or taped, to watch on television every day in the furniture store that he and his wife operate near downtown Spencer. His days revolve around baseball. When he sleeps, he dreams about baseball.

“If I just had two good knees, I wouldn’t have a whole lot to complain about,” Gibbons said.

On a wall of the furniture store, in the midst of sofas, tables and lamps are Western Carolina softball calendars. They seem like an odd addition to the place, but Gibbons is proud of his granddaughter. Hunter Gibbons, a two-time county softball player of the year in her days at West Rowan High, is a recent graduate of Western Carolina. She didn’t look like she’d be amazing, but she possessed crazy bat speed. She broke a fistful of school records at WCU, including most career homers (35) and RBIs (129). She was first team All-Southern Conference as a senior and may be in the Salisbury-Rowan Hall of Fame some day.

Gibbons loves the Atlanta Braves and the New York Yankees. His favorite players are Kannapolis’ contributions to MLB, brothers Corey and Kyle Seager. On the other hand, he doesn’t think much at all of Bryce Harper, Philadelphia’s highly paid slugger, because Harper swings for the fences on every pitch, even with two strikes. In his playing days, Gibbons never swung for the fences.

“I was a contact hitter,” Gibbons said. “I didn’t hit home runs, but I didn’t strike out.”

Gibbons, as you might, expect, has baseball tales to tell. Most are about Salisbury Post 14’s 1944 American Legion baseball season at Newman Park. That was long before there was a Rowan County American Legion team. Gibbons believes he’s the last surviving member of the group of teenagers who made up the 1944 squad.

Gibbons’ father, Jeff, was a ballplayer and had played on crack service teams during World War I.  He taught Bill, who was born on April 17, 1928, how to play the game and how to play it right.

“I grew up with the game and learned to play early,” Gibbons said. “There was a fellow who drove the bus for the old pro teams in Landis, and he gave me an old  glove and some cracked bats. By the time I was 6 or 7, I knew what to do on a ball field. My dad worked so hard on the farm, but at the end of his day, he always made time to throw with me. He could throw the meanest short-hops you ever saw. Scooping all those short-hops that he threw me, that’s how I became a good first baseman.”

Baseball just about disappeared locally in 1942 and 1943. The priority, for every citizen, from 8 to 80, was contributing to the effort being made to win World War II.

Fired up by Gastonia’s American Legion World Series championship in 1935, Salisbury had jumped into the American Legion baseball business in 1936 and fielded good teams in 1936 and 1938. But America entered World War II in December, 1941, following the attack on Pearl Harbor. With world-wide freedom teetering on the brink, baseball seemed frivolous to a lot of people, a luxury that could no longer be afforded. Salisbury didn’t field a Legion team at all in 1942 or 1943.

But by 1944, the tide of the war had turned favorably toward the U.S. and its allies, and coach Bob Vickers announced plans to form a Salisbury Legion team that would compete in the Central District of North Carolina with Landis/China Grove, Kannapolis, Albemarle, Monroe, Greensboro and Mount Airy.  Travel expenses and gasoline were going to be obstacles for all teams, but everyone pledged to do their part to make it work.

Gibbons, who followed the major leagues  religiously in the pages of the Salisbury Post, was excited about his first chance to play Legion baseball. He was 16 in the summer of  1944.

“We hadn’t been playing much school ball because of the war,” Gibbons said. “I remember the first Legion practice we had with Coach Vickers. It was on a Saturday, and Coach Vickers saw that new first baseman’s mitt that my dad bought me in the stack of gloves, and said, ‘Well, who bought a new mitt? Son, you might not make it.'”

But Gibbons did make the team. He threw right-handed, but he batted left-handed, which provides a substantial advantage in baseball. And he’d been scooping short hops for a lot of years.

“Most of our Legion boys that year were from Boyden High, I’m sure,” Gibbons said. “I don’t know what their fathers did for a living, but I believe I was the only farm boy on the field. I wasn’t no big guy, about 165 pounds, but I’d worked on a farm all my life, and farm work had made me strong. I was responsible for milking more than 20 cows and we cultivated a fair amount of cotton on that farm.  In the fall and winter, I hauled firewood to the stove every day.  I had strong hands and arms. I had that going for me, and I loved baseball.”

Gibbons said he wanted to play baseball so badly for the Legion team that he would have walked 10 miles every day from Woodleaf to Salisbury, but he didn’t have to.

“A fellow named Winecoff delivered the Salisbury Post to our farm every afternoon, like clockwork,” Gibbons said. “You could set your watch by Mr. Winecoff. Every afternoon at 2 o’clock, he would put the Post in our paper box. So I’d quit working on the farm every day a little before 2, I’d get cleaned up a little bit, and then he’d let me ride with him into Salisbury. In the summer months, he knew I’d been up milking cows at 4 a.m. and working in cotton at 7 a.m., and he was glad to give me a ride.”

Vickers assembled quite a team. Catcher/pitcher Bob Linder would become well-known as an athlete locally and would eventually coach China Grove, South Rowan and A.L. Brown football teams. Bill Newsome, the team’s ace pitcher, would make it into the war in 1945, serving on an aircraft carrier in the Pacific. He was a standout at Catawba after the war. In the 1960s, he was twice a candidate for sheriff of Rowan County.

Center fielder Joe Fries and third baseman Jackie Walters would make their mark in education after graduating from Catawba. Walters would serve as principal of Faith and Rockwell elementary schools and as director of development at Nazareth Children’s Home. Fries would become superintendent of the Cabarrus County school system.

Salisbury played one preseason game. Salisbury mayor R.E. Ramsey welcomed Legion baseball back to Newman Park by throwing out the first pitch.  Then Salisbury battled Albemarle to a 0-0 tie that was called by mutual agreement after seven innings. Newsome held a strong Albemarle team to two hits, but Salisbury had only one.

Opening day was May 19. Gibbons had the first RBI of the season for Salisbury in the eighth inning of a 4-2 loss to Albemarle.

Salisbury’s first win came in its third game on May 24 when Newsome tossed a 7-0 shutout against Landis/China Grove.

On June 6, Ralph Helms had three hits to lead Salisbury to a 9-4 win at Mt. Airy, although D-Day, understandably, got most of the ink in the following day’s Salisbury Post. “Allies Dash Into France” read the headline.

Gibbons had an extraordinary game on June 26 when Salisbury went to Mount Airy, scored 11 runs in the fifth inning and won 28-10. There was no 10-run rule in those days, and Gibbons was glad. He went 4-for-5 with six runs scored. Only a handful of players in the history of Salisbury/Rowan County Legion ever scored six runs in a game.

“I liked to use a bottle-neck bat, 33 inches, and I’d choke that bat,” Gibbons said. “I was proud of that game. I still remember it.”

After that explosion, Gibbons got hot at the plate. He had three RBIs in a win against Monroe.

Unfortunately, that Legion season had a bizarre ending.

Salisbury owned a respectable 12-9 record after the win against Monroe on July 6, but Post 14 wouldn’t win another game on the field.

Mount Airy and Monroe were the league’s weakest clubs and announced on July 8 they were folding for the season. That left Salisbury in a bad way. Salisbury had home games left with both, but didn’t get to recoup the expenses from long road trips to those towns. Two Mount Airy forfeits and a Monroe forfeit lifted Salisbury’s record to 15-9, but the fun was short-lived.

Gibbons had three hits against Kannapolis, but Salisbury lost 3-2. Then Salisbury got blown out by Landis/China Grove. Those back-to-back losses on July 10-11 knocked Salisbury out of the playoff picture.

Stuck in fifth place in the division, Salisbury also folded at that point, forfeiting its final four games to Kannapolis, Albemarle, Landis/China Grove and Greensboro.

Gibbons was still eligible for Legion ball in 1945, although he was the only returning starter from the previous summer. His older teammates had moved on, to college or the war.

Gibbons’ love affair with baseball didn’t end when his Legion days were over.

He played for many years in the Yadkin Valley League, suiting up for semi-pro teams based in Cleveland, Mocksville, Rockwell and Faith. He remembers playing with a teenage Jay Ritchie (who would make the majors) and batting against Cooleemee legend Grimes Parker. He recalls getting two hits against Kannapolis fireballer Gerald Blackburn, and Blackburn yelling that the next pitch he threw to Gibbons was going to be in his ear.

“The biggest crowds I ever played in front of were when Mocksville played against Cooleemee,” Gibbons said. “Now those were some games.”

Outside of baseball, Gibbons’ life was spent working just as hard as he had growing up on the farm. He spent 17 years in cotton mills and 29 more as a truck farmer.

When he was 70, he was sure he was done for. After an attack of gout, he lay in a hospital bed for nine days, stiff as a board, unable to move a muscle, but he miraculously recovered.

He’s grateful to still be kicking 21 years later. It means he can watch baseball every day for six months a year.

“I got hit in the ribs by pitches and I got my share of strawberries from sliding, but I never really got hurt and never missed a game,” Gibbons said. “I never tried to hurt anyone, either. I loved the game, and baseball was always good to me.”