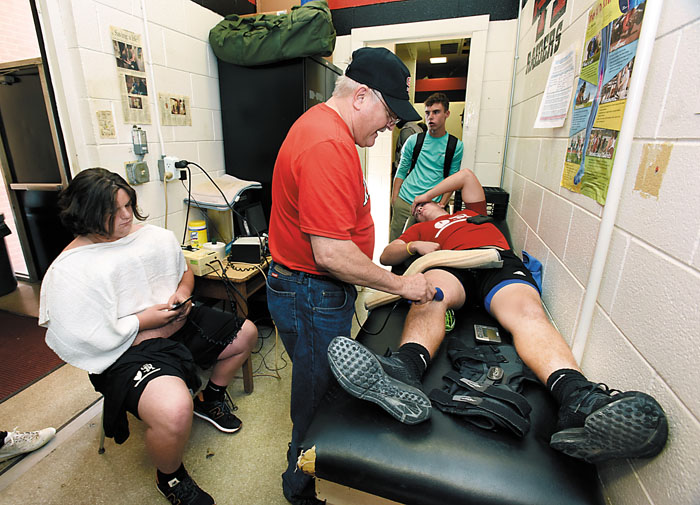 SALISBURY — Rowan County’s high school athletes have never had it so good — at least as far as health care goes.

That’s not to slight the first responders and staff personnel who did all they could for the kids throughout the decades. Not every school had a Larry Sides, who served as a trainer at West Rowan High for 30 years and then, in “retirement,” for another 10 years at South Rowan.

Most schools had local orthopedic surgeons volunteering their time and walking the sidelines at home football games, but come Mondays, injured athletes would have to go off campus for treatments.

Now, however, student athletes from all sports have a full-time staff member that has an actual training room on campus for daily treatments, not to mention coverage at all contests — not just football games.

Rowan-Salisbury Schools began working with Novant Health in September 2018, to make the program a reality. It actually began at some of the schools during the recent spring semester.

Novant Heath in Rowan County, as part of its community engagement, provides the athletic trainers and pays their salaries. The school district’s commitment included providing an adequate facility on each campus and budgets for medical supplies.

Bob Casmus is Novant’s supervisor for the athletic trainers, overseeing 17 of them — Rowan’s six, and those at Davidson County’s high schools, who have had trainers for a couple of years. The training personnel at Davie County High, Thomasville High, Bishop McGuiness and Salem Academy are also under the Novant umbrella and Casmus’ watch.

Casmus, long-time head athletic trainer at Catawba before joining Novant in 2017, said that he goes to three of the schools each day, on a rotation basis.

“I oversee them and serve as their resource, to make sure that things are running smoothly,” said Casmus. “And I’m a liaison between them and the school athletic directors and the county AD.”

“Some started last semester and those schools already saw a difference in the care of the athletes,” said Casmus. “It’s going to be a good thing going forward. The schools are going to be saying, ‘why didn’t we do this sooner?'”

Casmus reiterated that the six athletic trainers will be at their schools full-time, for all student athletes in all sports. They will be in their training rooms in the early afternoons, administering treatments and rehabs, before heading out to practices and games.

In addition to home games, each trainer will travel to away football games, since there is usually nothing else conflicting with that sport on Friday nights. They will also cover jayvee football. Most of them have already covered summer workouts and are ready for the arrival of fall athletes this week.

“We’re just raising the bar, to improve the healthcare of the student athletes,” added Casmus.

After covering the Davidson and Forsyth schools for the past several years, Casmus and Novant had hoped that Rowan would follow suit. According to Casmus, one of the leaders of the push to implement the program was Dr. Art Paschal, Rowan’s county athletic director, before his retirement last month.

“Dr. Paschal really wanted this to happen and Novant was all for it,” said Casmus. “There was great support from (Novant administrators) Dari Caldwell and Gary Blabon. The local physicians were also supportive.”

Paschal, who has passed the county AD torch off to Rick Vanhoy, deflected the credit, when reached at his home on the North Carolina coast.

“A lot of pieces had to align themselves for this to happen,” said Paschal. “(Superintendent, Lynn) Dr. Moody was on board and Dari Caldwell, Gary Blabon and Bob Casmus from Novant were instrumental in getting it done. Dr. (Chip) Comadoll and others from the medical community helped us — just a lot of folks played a part in it. The bottom line is that it’s  a huge win for the kids.”

Vanhoy was a multi-sport star at East Rowan in the 1970s, before playing football at UNC. He coached at East, Lee County and South and was principal at Erwin Middle School before retiring. He returned earlier this month in the part-time role of county athletic director.

As a former athlete and coach, Vanhoy knows first-hand the importance of athletic training — not only when an injury occurs but with treatments aiding the healing process, getting athletes back on the field or court as quickly as possible.

“The opportunity for kids to have ongoing rehab, beyond the initial treatment is very important and will be a great thing,” said Vanhoy. “It’s a great partnership with Novant. I know that when I was coaching, training was as important as the coaching. We had some good ones (trainers) back then, but having professionals from Novant is certainly going to make things better for our schools and our athletes.”

“It’s a great opportunity for all the schools to have athletic trainers on site,” Bell said. “We felt like we were behind the times because we didn’t have anyone there during the day, providing treatment and getting the athletes back as soon as we possibly could.

“We all really appreciate Novant stepping up, to help us get this in place,” continued Bell. “This is going to be great for everybody. It takes a lot of stress off of school administrators, knowing that you have proper coverage for the student athletes.”

Casmus hopes to achieve what the program has already achieved in the other counties. He led those schools through the “safe sports school” accreditation process.

“In Davidson and Davie, and at Bishop McGuiness and Salem, those schools met certain criteria for the standards of care for the athletes at the high school level and achieved that accreditation. My goal is to bring that to the Rowan County schools in the course of the next year.”

To do so, Casmus said that the local schools will be led through a self study, and then, through the steps for accreditation. “Then we can apply for safe sports school status,” he said. “It shows the parents that the schools are meeting certain standards of health care for the athletes.”

Examples for a safe sports school, according to Casmus, are items like having good emergency action plans, having  AED access, and meeting the state criteria for heat illness and concussion management, just to name a few.

Again, it appears that all concerned are happy that the program is finally in place in Rowan County.

“Novant at Rowan has really helped us make this happen,” concluded Casmus. “We provide the athletic trainer and the schools have been great in providing the adequate working facility — gone are the days when a part-time person worked in a closet or a storage room with basketballs or equipment piled up in the corner. It has to be dedicated to athletic training and the schools have been great in doing that and in providing a proper budget for supplies. In the long run, it’s the student athletes who are the winners.”