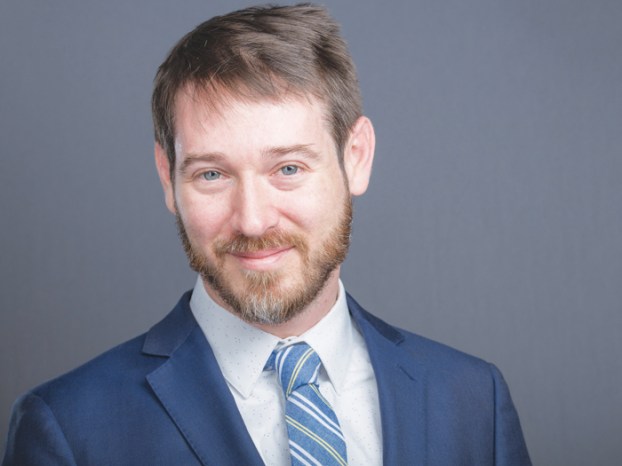 SALISBURY — Salisbury native Matt Leatherman is running for state treasurer as a Democrat.

His father is Salisbury businessman John Leatherman, who previously served as chairman of the Rowan County Republican Party. But the younger Leatherman says he’s proud to be running as a Democrat.

“My dad and I have a really good relationship,” Leatherman said. “We don’t see eye to eye on politics. I think that’s true for a lot of families. It’s true for ours as well.”

Leatherman grew up in Rowan County and graduated from West Rowan High School. He returned to his home county this week as part of a campaign listening tour.

On that tour, Leatherman, 38, is sharing why he is running for office. He was policy director for former State Treasurer Janet Cowell, but his choice to run for office is a personal one for his family.

On the last day of 2016, Leatherman’s wife, Keisha, was pregnant with their second daughter. Keisha began feeling unwell, so they called her obstetrician and general practitioner, receiving no answer because of the holiday. Keisha then called the State Health Plan’s Nurse Hotline, which she had access to as a teacher. In that call, Keisha was advised to go to the hospital to get checked out.

The Leathermans’ daughter, Josie, was born 13 weeks early, weighing 1.5 pounds. She was in the neonatal intensive care unit for 142 days.

The day after Josie was born, Dale Folwell, a Republican, took over the treasurer’s job.

“That individual’s agenda for the State Health Plan has been cutting back preventative care programs and also threatening to reduce reimbursements to doctors and hospitals to such levels that a lot of medical offices are worried that they might not be able to stay open, particularly in more rural areas,” Leatherman said.

Having the Nurse Hotline available for his family inspired him to run for office and ensure that everyone in North Carolina has access to health care like his family has, he said.

Because of Josie’s premature birth, she requires three medications that cost $8,500 a month. The cost doesn’t include other care for Josie or the rest of the family. The Leathermans rely on Medicaid as a secondary provider beyond coverage by the State Health Plan.

“I’m not the face of Medicaid in the sense that people popularly think of it,” Leatherman said. “I can step forward and say this is what it looks like, and people will listen to me.”

But the Leathermans’ story has been a happy one. That’s not the case for all families, he said.

Leatherman said he is running on a platform of access to quality health care, providing health and retirement benefits for state employees, and helping communities receive money to invest in schools and water and sewer systems. He also wants to ensure rural communities such as Rowan County don’t lose their hospitals or doctor’s offices.

“Families like mine that have children who need access to this kind of care couldn’t live in a community that didn’t have that access, so that is a challenge for a place like Rowan County,” he said. “I see it as an opportunity to step up, do better and benefit the community.”

He said neither Republicans nor Democrats are in favor of reducing health care in their communities.

“The only reason why I’m in this race is because I think I’m the person who can beat the incumbent and restore these health programs that are so important for so many people’s lives,” Leatherman said.

Leatherman says he doesn’t want to exclude anyone, even if they don’t agree.

“I’m trying to run on a very practical platform: one that focuses on service, one that accentuates issues that people live in their day-to-day lives,” Leatherman said. “I want the votes of everyone. I want to earn the votes from everyone.”

He said the State Treasurer’s Office serves the people of North Carolina. He wants to bring the office to them.

“This is the place in state government, in my opinion, where you can most immediately and practically help people,” he said. “When you’re talking about making sure that the retirement check is there for a teacher every month or making sure that the hospital is staying open, making sure that $100 billion is invested in a way that grows our economy, making sure that communities are able to take on credit so that they can update their water/system, keep clean drinking water in people’s taps, the opportunity to tell their stories is an honor. I’m excited to do it.”

SALISBURY — Mayor Pro Tem David Post says economic development should be at the center of everything. Concentrating efforts on... read more