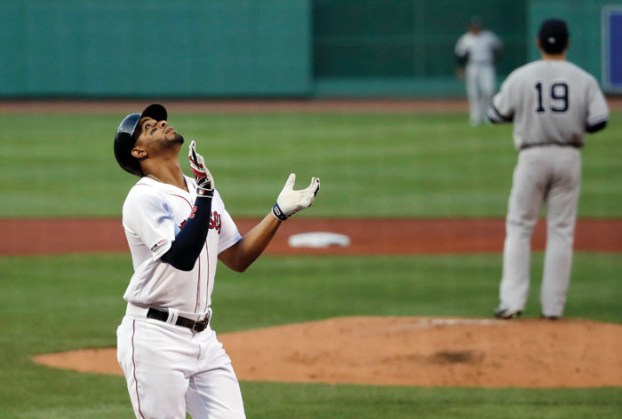 BOSTON (AP) — Xander Bogaerts hit a three-run homer in Boston’s seven-run first inning, and the Red Sox pounded the AL East-leading New York Yankees 19-3 on Thursday night in the opener of their four-game series.
The 19 runs were the most scored by the Red Sox against the Yankees in the 117-year history of the rivalry.
Bogaerts finished with four hits, including a solo shot in the eighth. Andrew Benintendi and Jackie Bradley Jr. had three hits apiece.
New York right-hander Masahiro Tanaka (7-6) allowed 12 runs and 12 hits in 3 1/3 innings. It was the most earned runs ever allowed by a Yankees pitcher against Boston since the earned run became an official stat in 1913.
Rick Porcello (9-7) pitched six innings of three-run ball for Boston.
TWINS 10, WHITE SOX 3
CHICAGO (AP) — Nelson Cruz hit three of Minnesota’s five homers and finished with five RBIs, powering the Twins to the rout.
It was the first three-homer game for the six-time All-Star, who has 385 home runs in his career. He became the 10th player in big league history with a three-homer game after turning 39, according to Baseball Prospectus, joining a list that includes Babe Ruth, Stan Musial, Reggie Jackson, Dave Winfield, Frank Thomas and Álex Rodríguez.
Max Kepler and Miguel Sanó also connected as Minnesota (62-40) totaled at least five homers for a major league-record ninth time this season, according to STATS. José Berríos (9-5) pitched seven effective innings for his first win since June 6.
The White Sox (45-55) dropped 10 games below .500 for the first time this season. Yoán Moncada hit his 19th homer, but Lucas Giolito (11-5) was hit hard by Cruz and company.
CARDINALS 6, PIRATES 3
PITTSBURGH (AP) — Paul Goldschmidt homered in his career-high fourth straight game, helping the Cardinals finish a four-game sweep of the Pirates.
St. Louis (55-47) won for the eighth time in nine games to move into a tie with the idle Chicago Cubs atop the NL Central.
Goldschmidt drove in nine runs and had four of the Cardinals’ 12 home runs during the sweep.
Kolten Wong and Dexter Fowler also connected for St. Louis. Miles Mikolas (7-10) allowed three runs in six innings.
Pittsburgh has dropped 11 of 13. Pirates right-hander Joe Musgrove (7-9) was charged with five earned runs in five innings.
ROCKIES 8, NATIONALS 7
WASHINGTON (AP) — Washington ace Max Scherzer lasted five innings in his return from the injured list, and the Rockies beat the Nationals in a battle of worn-out bullpens.
Ian Desmond led off the ninth with a homer off 42-year-old Fernando Rodney (0-4), who pitched in both games of Wednesday’s doubleheader. Rodney then walked Charlie Blackmon, who advanced on a wild pitch and a single by David Dahl, and Daniel Murphy drove in Blackmon with a groundout.
Murphy homered and scored three times for the Rockies, who won for just the fourth time in their past 20 games. Jairo Diaz (3-2) got the win, and Wade Davis earned his 15th save.
Anthony Rendon hit a three-run drive for Washington, which wasted a chance to gain ground on first-place Atlanta in the NL East.
Scherzer had been sidelined by inflammation under his right shoulder. He struggled with his command at times in his first start since July 6.
METS 4, PADRES 0
NEW YORK (AP) — Jacob deGrom pitched seven innings of four-hit ball, sending the Mets to the win.
Todd Frazier hit a two-run double as New York built a four-run lead against Eric Lauer, the most runs the Mets have scored in the first inning during deGrom’s 160 starts.
DeGrom (6-7) struck out nine while extending his scoreless streak to 17 innings. The ace from the Sunshine State has a 1.86 ERA in 52 day games, best in the majors since at least 1913 for pitchers with at least 200 innings.
Mets closer Edwin Díaz entered for the ninth and was pulled after Manny Machado drilled a base hit off his left big toe. Díaz limped off the field, and X-rays were negative.
Lauer (5-8) was pulled after 2 1/3 innings.
___
More AP MLB: https://apnews.com/MLB and https://twitter.com/AP_Sports

By Mike London mike.london@salisburypost.com KANNAPOLIS  — Allison Parker is doing exactly what she wants to do and is doing it... read more