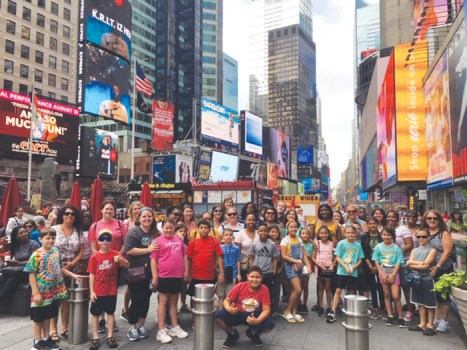 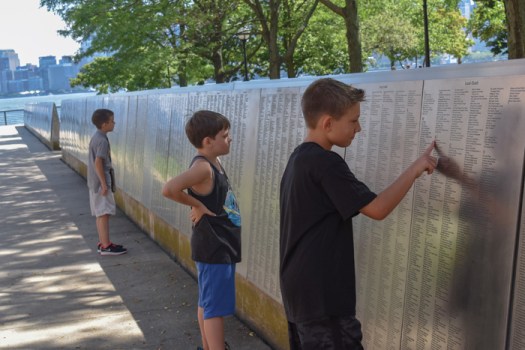 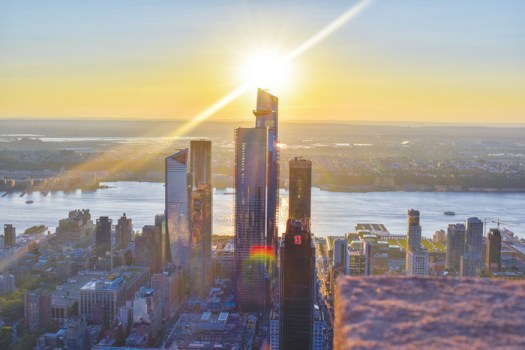 Students, chaperones and staff snap many a scenic picture during a recent trip to New York City. The trip, called a learning expedition, was offered through the system's renewal status. Submitted photo

SALISBURY — With pencils in a flurry of movement, a group of fourth- and fifth-graders at Knollwood Elementary School huddled over tables Tuesday, active in an effort to recall a recent adventure.

“I felt small because of how tall the buildings were,” read the paper of rising fifth-grader Sean McGuire. 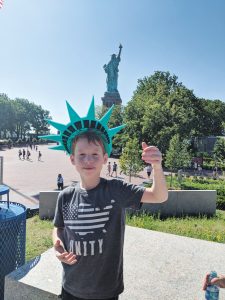 Christopher Gaither poses with the Statue of Liberty. Submitted photo

“I felt frightened because I was surrounded by the crowds,” wrote fourth-grader Dallas Davidson.

“I felt amazed because I was in a new place,” recalled Kaylee Reyes, a fifth-grader.

But in an effort to describe the students’ school-funded summer exploration of New York City, fifth-grader Perla Quintero captured the experience in three words: “It was magical.”

The trip, a continuation of “expeditions” for Knollwood students, was the brainchild of Principal Shonda Hairston using charter-like funding flexibilities made possible through the school system’s status as a renewal school district.

“I think an expedition is different from a field trip,” said Hairston. “We’re not just going to go, we’re going to really learn. We’re going to connect.”

The connections, she said, provide hands-on understanding to previously intangible concepts for Knollwood students, including the concepts of mountains, beaches, fishing or — in the case of the New York trip — city life.

“Really, we’re looking at closing that opportunity gap,” said Hairston. “We’re providing students the opportunity to have these experiences and this exposure and connect it back to the classroom.”

By repurposing Title I funds, Hairston has been able to provide three to four expeditions across each grade level throughout the school year. The New York trip was offered to a limited number of rising fourth- and fifth-graders, with students required to complete a research-based application before qualifying.

In total, 20 students were joined by 22 parents and staff members for an experience that was — in the words of Quintero — magical.

“I loved watching their faces as we turned into Times Square and they just kept looking up and up and up,” said curriculum coordinator Renee Cunningham. “That was one thing with their projects: Before the trip, a lot of them couldn’t explain why it was important because they had nothing to compare it too.”

A weekend exploring Fifth Avenue, Times Square, Ellis Island and the 9/11 Memorial and Museum — along with a visit to Broadway to see the musical “Aladdin” — would effectively remedy the disconnect. Just like in the play, Hairston said, students saw there is a “whole new world out there.”

For parent chaperone Allyson Neves, who accompanied son Ryan and classmates, the shared experience offered another plus.

“I went with the intention of chaperoning but was blessed with a unique one-on-one experience with my son,” Neves said. “As a parent, experiencing the wonder in my child’s view was amazing. However, nothing compares to the bond we shared and deepened during this trip. … This trip has inspired future adventures for our family and the possibilities for learning together.”