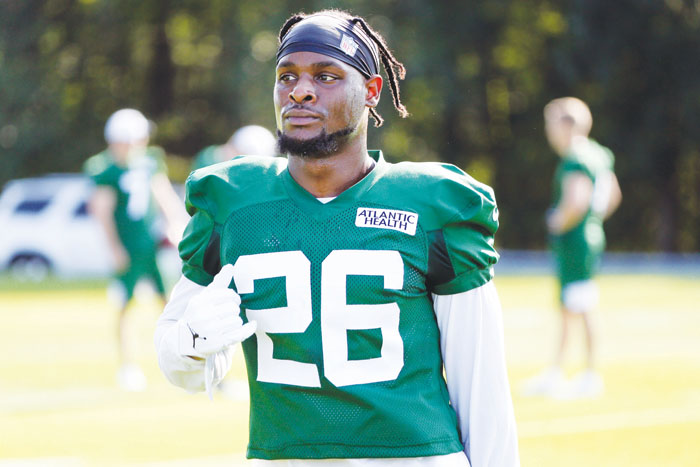 FLORHAM PARK, N.J. (AP) — Le’Veon Bell took a screen pass from Sam Darnold, shifted around some would-be tacklers and scooted down the sideline for a big gain.

While it was just an early moment in the New York Jets’ first training camp practice Thursday, it’s the type of scenario Bell and the Jets envision playing out over and over again this season.

“I felt good,” the star running back said. “Yesterday, I did the conditioning test twice. So, yeah, I feel good.”

That’s a positive sign for Bell, who sat out all last season during a contract dispute with the Pittsburgh Steelers. He signed a four-year, $52.5 million contract with the Jets in March, but there were questions about how the long layoff might affect him — and whether he’d be the same type of dominant dual-threat backfield presence he was for five seasons in Pittsburgh.

Bell led the NFL with an eye-popping 406 touches in 2017, and he’s ready for a similar workload with the Jets.

“I mean, I’m up for 500 if it’s going to take us to the Super Bowl,” Bell said with a laugh. “It don’t matter how many touches I get. I’m just trying to win games. If I have 19 touches and we win the Super Bowl, you think I’d care?

“I just want to go out there and do what I can to help this team win games.”

Bell worked out with a personal trainer during New York’s voluntary workouts, and rejoined his teammates for mandatory minicamp last month. Coach Adam Gase said the Jets will be “smart” with Bell’s workload in camp, but it’s clear the running back is happy to be back on the field.

“Man, I couldn’t wait,” he said. “I’ve been itching for a year. Just the fact that I was back out here, it’s a step. I think the next step’s going to be tomorrow and we have to put pads on and stuff like that. So, I’m going to take each and every day one day at a time and go from there, but I feel good.”

Added Gase: “It was like he hasn’t missed a beat. Walked in, knows what’s going on, looked good, caught the ball well, ran the ball well. You can’t tell that he’s missed any time.”

Bell last played in a game on Jan. 14, 2018, in a playoff loss to Jacksonville — more than 18 months ago. He ran for 67 yards and a touchdown in that game, and caught nine passes for 88 yards and a score. Many considered Bell the best all-around running back in the NFL at the time, and it was tough to argue.

Others have now entered that conversation, such as the Cowboys’ Ezekiel Elliott, the Giants’ Saquon Barkley, the Rams’ Todd Gurley, and the Saints’ Alvin Kamara. But even with a year off the field, Bell has set loftier goals for himself.

“I expect to be better,” Bell said. “I don’t want to just say I’m going to be how I was two years ago. Each and every year, I feel like I want to be a better player. I’m confident. I feel like I’m healthy. I’m just ready to go out there and just perform.”

“He’s going to bring the best out of everybody every single day, and all he wants to do is win,” said nose tackle Steve McLendon, who played with Bell in Pittsburgh from 2013-15. “He wants to be a champion, as well as everybody else in this locker room.”

Gase hasn’t said how much Bell will play in the preseason, if at all. In the 2016 and 2017 preseasons with Pittsburgh, Bell played — and only briefly — in only one game each summer. Other than that, he was mostly a spectator until the regular season kicked off.

And, then, he was the ultimate bell-cow running back.

“I’m sure the coaches are going to do what’s necessary for me,” Bell said. “They’re going to protect me and make sure I get through the season, make sure everything’s healthy. I’m going to be working with them and doing what they tell me to do.”

Bell acknowledged he has a chip on his shoulder — “Of course, just because of the fact I haven’t played in a year” — but also believes a positive might have come from sitting out last season.

“Usually when you play football and you have a whole season, you try to recover and then when you recover, your whole body doesn’t really recover all the way coming into that next season,” Bell said. “I had that time where I literally could recover. When I was playing in ‘17, I don’t remember the little kinks and dings I had. I don’t remember where they were at.

“I feel rested and good. My joints feel good, so I’m excited and ready to play.”

NOTES: Bell on Chargers RB Melvin Gordon, who is sitting out camp in a contract dispute: “I’m proud of him. He knows his worth. He knows what he needs to do. … I hope he goes out there and gets what he deserves.” … The Jets removed CB Brian Poole from the non-football injury list and waived DL Fred Jones. Gase said Poole was on the NFI list because the team wanted him to have an extra day to work on his conditioning. … RG Brian Winters had an excused absence to be with his wife, who gave birth to a boy.