SALISBURY — Giannina Monzon moved to Salisbury two years ago and now wants to serve the community.

As a board member of Pray Ecclesia and a member of Pray Rowan, she is active in civic affairs. While the Salisbury City Council race is nonpartisan, Monzon announced her council bid at the the Rowan County Republican Party’s annual Lincoln Reagan Dinner on June 28. 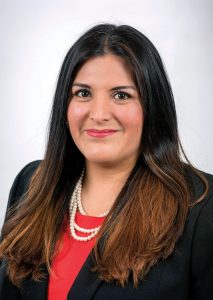 “I’ve always served to my church and to my community,” Monzon said. “It was going to take something else this time, especially for my kids, being a mom.”

Several months ago, Monzon was asked if she had considered running for Salisbury City Council. Instead of writing off the suggestion, she gave it some thought.

“They saw me in that way — what they know about me would be an asset to the group and to the city. And I was really humbled by that,” Monzon said.

Monzon wants to bring efficiency to the City Council, the same as in her job as president at Eagle Integrity Solutions. She wants the council’s meetings to be more compact so that residents are more willing to attend the entire meeting. She also wants to provide a follow-up to council decisions. For example, with the repaving of Newsome Road, she would re-evaluate the timeline of the project and push it along.

She wants to encourage the next generation of entrepreneurs by creating a mentorship program at local colleges in cooperation with small businesses.

She also wants to connect groups that have the same goals to collaborate. This strategy can be used for reducing crime as city officials encourage those groups to work together, she says.

Monzon says she would come to council meetings with love, peace and a clear mind and not a lot of emotions.

“In the past year, there’s been a lot of division,” Monzon said. “How can we bridge that gap together to bring the city together?”

Monzon said social issues will drive away business, and she wants to remain positive as a council member.

Monzon, 37, classifies herself as a millennial. She wants to prove that millennials are not selfish and are willing to give back and be involved in government as well-rounded citizens.

She is also a Hispanic woman and would add diversity to the council if elected, she says. Monzon immigrated from Peru in 1989 with her family. She can speak Spanish and draw in the Hispanic population to council decisions, Monzon said.

She says running for City Council is her American dream. Going through the immigration process and gaining citizenship taught her how to follow the law and gave her a perspective that freedom is a privilege.

She says it’s been in her heart to be a public servant since her upbringing.

Monzon appreciates others who have been public servants.

“I’m no different than anyone else in the city whether you’ve run or didn’t run,” she said. “One thing that we have in common is that we love this city. And so how can I make a difference? What can I do with my skills?”

She said the small-town feeling that invited her into Salisbury years ago as the place to raise her two children, Christian and Lorenzo, is what makes her love the city and why she wants what’s best for Salisbury.