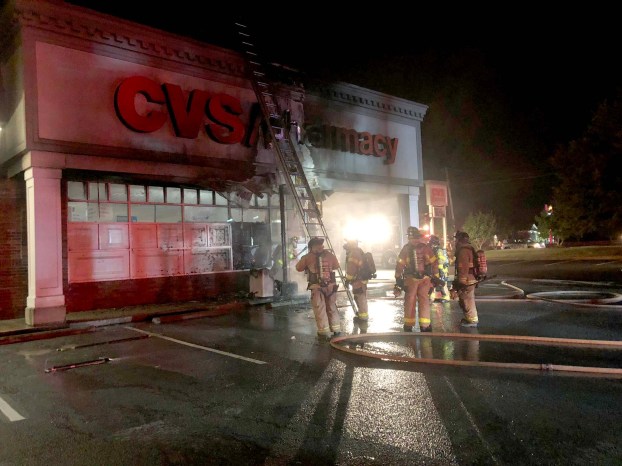 Firefighters respond to a fire at this East Innes Street CVS store that occurred late Wednesday night after a burning trash can caught the front of the building on fire. Photo by Salisbury Fire Department 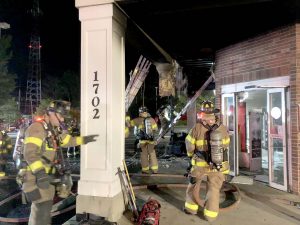 Firefighters respond to a fire at this East Innes Street CVS store that occurred late Wednesday night after a burning trash can caught the front of the building on fire. Photo by Salisbury Fire Department

SALISBURY — A trash can fire spread to the front of the CVS pharmacy on East Innes Street on Wednesday night, leaving “a good amount” of damage inside and out.

City Fire Marshal Terry Smith said investigators are still working to determine who or what caused the initial fire. The store is at 1702 E. Innes St., off Avalon Drive.

The call came in from a passer-by just before 9:45 p.m. Wednesday. The Salisbury Fire Department responded and quickly extinguished the fire, Smith said.

He said fire crews remained on the scene until midnight to make sure the fire did not spread into the attic.

The trash can that caught fire is in front of the store, and investigators hope to look at surveillance video to determine if someone set it on fire or if it was an accident.

Smith said the building was still without power Thursday, but once it is restored investigators will be able to look at security video.

He said investigators also intend to get video from nearby businesses.

“There was a good amount of fire damage to the outside and some smoke damage on the inside (of the building),” Smith said.

Investigators also talked with motorists who saw the flames.

SALISBURY — Ashlyn Coley had to make several trips to her car to get all the teaching materials and books she... read more