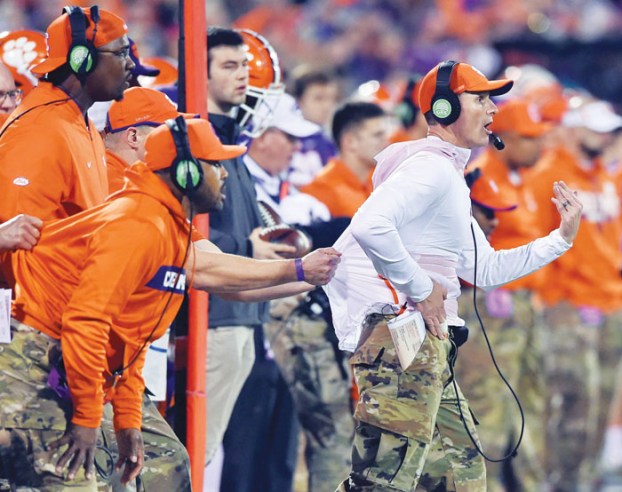 FILE - In this Nov. 17, 2018, file photo, Clemson defensive coach Brent Venables is pulled back by an assistant during the first half of an NCAA college football game in Clemson, S.C. Clemson’s defense was a big reason why the Tigers won a second national championship in three seasons. Now that unit has massive holes to fill after losing its entire front to the NFL, along with three key linebackers and two members of the secondary _ and that could mean the Tigers have to win shootouts behind quarterback Trevor Lawrence to stay on top. (AP Photo/Richard Shiro, File)

CLEMSON, S.C. (AP) — Clemson officials are confident the athletic department’s practices and policies will prevent a repeat of the failed performance-enhancing drug tests that caused three players to be suspended before last season’s College Football Playoff.

The Tigers were riding into a fourth straight CFP appearance when they were hit with the news in December that star defensive tackle Dexter Lawrence, reserve offensive lineman Zach Giella and freshman tight end Braden Galloway had tested positive for the banned substance ostarine.

Lawrence missed both his team’s semifinal and championship wins on the way to their second national title in three years. In the seven months since the ban, Clemson has double and triple checked how it handles everything from talc in the weight room to the protein shakes it provides to ensure the wrong things won’t cost players time on the field.

The department’s review came through the NCAA appeal led by Lawrence, Giella and Galloway, who were subject to a one-year ban for the positive tests. The NCAA rejected the players’ appeal this past spring. All three have said they had no idea how ostarine got into their systems.

Coach Dabo Swinney has said the Tigers have a track record of doing things clean. Clemson’s athletic department said it had administered 329 test for performance-enhancing drugs since 2014 and all had come back clean except for those of Lawrence, Giella and Galloway last December.

Any supplement used is first reviewed by Clemson sports medicine and nutrition departments along with its NCAA compliance office before getting approved for us by athletes.

Clemson athletic spokesman Jeff Kallin said the Family Educational Rights & Privacy Act prevents the school from discussing the appeal. Kallin said the athletes asked Clemson not to comment about what went into its NCAA appeal.

Lawrence, an all-Atlantic Coast Conference lineman, g ave up his final season to turn pro and was drafted 17th overall by the New York Giants.

Giella was a graduate who had used three of his four years of eligibility so he is no longer part of the program.

The lone loss this season is Galloway, a promising, 6-foot-4 sophomore who figured to compete for a starting spot this fall. Galloway will practice this season and could return in time for a late December bowl game, Swinney said. NCAA rules say a player is suspended for a calendar year after a positive test. The three were tested after the Clemson’s win in the ACC title game in early December.

“If we’re fortunate enough to be in a high level postseason game that’s after the middle of December” Galloway would be eligible, Swinney said. “If we’re playing early in December we probably didn’t have a very good year. But he would have the opportunity, I think, to be back for that.”

Tight ends coach Danny Pearman said Galloway, who caught a TD pass in his first college game last September, was devastated after losing the appeal. Pearman let the disappointed Galloway vent a bit about the issue when they talked, then challenged him to stay engaged with the team knowing he had two more seasons of college football ahead.

“Sometimes it isn’t fair, but how do you deal with it? Do you cry over spilled milk or ‘Woe is me?’” Pearman said. “That hasn’t been his style at all. He’s not necessarily embraced (missing the year), but he’s learning to deal with it every day and making the best of it.”

The Tigers list fourth-year junior J.C. Chalk as the starting tight end heading into summer training camp. Chalk had four catches for 40 yards in his career.

Radakovich sees last year’s failed tests as a rare breakdown and not a signal that the department’s process needed an overhaul. “This was such an outlier, I don’t know” if there were any lessons the school could take out of it that weren’t already in place, he said.

Ledecky returns but US falls to Australia at world championships