Cam’s back: Panthers’ QB throws with ‘no limitations’ 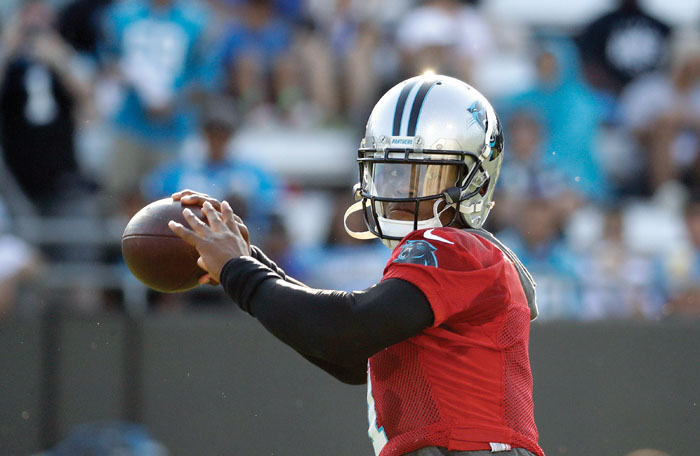 SPARTANBURG, S.C. (AP) — Cam Newton completed two long passes on the first day of training camp, displaying the arm strength that was noticeably absent the second half of last season.

The Panthers quarterback participated in 11-on-11 team drills for the first time since undergoing arthroscopic surgery in January on his right throwing shoulder. After a shaky start, Newton completed a long TD pass to wide receiver Curtis Samuel — one that sailed 40 yards through the air — and another 45-yard strike to tight end Chris Manhertz Thursday night at Wofford College.

“Everything that we saw (leading up to camp) really just pointed to him being ready to go,” Panthers coach Ron Rivera said. “It not only did a lot for us, but I think it did a lot for him just uncorking one like he did and letting it go.”

Newton threw about 40 passes during individual drills and another 40 during team drills and didn’t appear to be on any type of a pitch count.

“Oh yeah, there’s no limitations,” Turner said. “He’s out here practicing just like any of our other guys.”

“The long one to Curtis was great and he had a couple of other nice ones,” tight end Greg Olsen said. “For the first night I think it was what everyone was hoping for.”

Wearing a red No. 1 practice jersey, Newton went through an extensive shoulder stretching period before practice under the watchful eye of head athletic trainer Ryan Vermillion.

After a series of warmup passes in individual drills, Newton looked a little rusty in the first two team drills. He attempted to check down a pass in the flat, but the ball was tipped by a blitzing Mario Addison and caught by linebacker Shaq Thompson, who returned it for a touchdown.

But Newton began to heat up in the final 11-on-11 team period.

Newton dropped back and threw a perfect strike down the middle of the field to a streaking Samuel for a touchdown as the crowd erupted. It’s what Panthers fans had come to see, and Newton celebrated by running down the field and chest-bumping the third-year wide receiver.

A short while later, Newton found Manhertz down the seam and split double coverage with a pinpoint pass resulting in the play of the day.

While Newton missed a few throws high and wide, overall it was a promising night and an important step in the right direction for the 2015 MVP, who struggled through a shoulder injury last season that limited his arm strength.

By the second half of last season, Newton was a shell of his former self.

He was limited to throwing passes of less than 20 yards downfield and the injury forced him out of the final two games of the season after the Panthers fell out of playoff contention. Newton’s lack of arm strength made the Panthers fairly predictable on offense and Carolina lost seven of its final eight games to finish 7-9.

Newton began throwing short passes to mostly stationary targets in the team’s minicamp in June, but this marked the first time he has participated in team drills.

Turner said simply having a healthy Newton back on the practice field is a big boost for the Panthers.

The Panthers have signed first-round draft pick Brian Burns to a four-year contract with an option for a fifth season.

The edge rusher is slotted to make approximately $13.5 million on the rookie wage scale. Burns reported to training camp Wednesday morning and signed the deal later in the day.

Burns was selected No. 16 overall.

The 6-foot-5, 250-pound Burns played at Florida State. He is expected to serve as an edge rusher when the Panthers switch to a 3-4 defensive front.

The Panthers made some other roster moves one day before their first training camp practice.

Wide receiver Torrey Smith and linebacker Jermaine Carter have been placed on the active physically unable to perform list to open training camp while rehabbing from knee injuries. They can come off the list at any time.