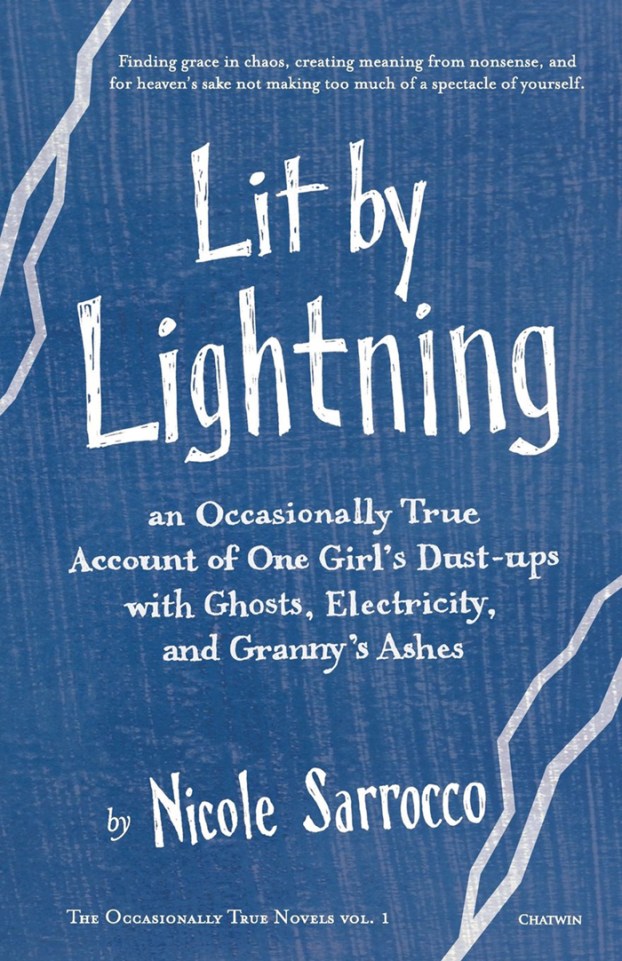 Author’s world is full of wonders

“Lit by Lightning” is an experience. The book by North Carolina writer Nicole Sarrocco was the first in a planned trilogy called “The Occasionally True Novels.”

The subtitle is a good summary: “an Occasionally True Account of One Girl’s Dust-ups with Ghosts, Electricity, and Granny’s Ashes.”

Sarrocco was here in July for South Main Book Co.’s anniversary, part of the group Trio. She has an air about her — open, inquisitive, receptive. And that describes the character in the book, which is a thinly veiled autobiography.

You must approach this book with a willing suspension of disbelief, and then just go with the flow. Sarrocco winds her way through the story with anecdotes, assorted unusual stories, intriguing characters and surprising situations.

The female narrator, who we can assume is Sarrocco herself, has something  more than empathy with the dead. She picks up feelings from rooms, furniture, objects.

Her daughter, Nora, is the same way, as is her young son, Edgar. Edgar often speaks to unseen people in the grocery store and at one point sees a group of people hopping on one foot at the bottom of the stairs.

Husband Thomas is sympathetic to his gifted wife. He doesn’t have the same abilities. She vows on the first page of the book, “Thomas is my last husband,” comparing him to the third piece of pie you have at a potluck. “But that third slice — and to be clear, Thomas is slice #3 for me — definitely has to be your last. So when I say he is my last husband, I don’t mean ‘latest,’ I mean last. Past three and there’s words for what you are and ain’t none of them nice.”

So our narrator is no-nonsense to a point. When she communicates with people who aren’t there, she’s adamant that she does not want to see them. She makes a point to NOT look in mirrors, so she doesn’t catch a glimpse of something she doesn’t want to see.

Her most pressing problem is what to do with her grandmother’s ashes. She’s had them for a while, unsure of what Granny wanted; equally unsure if she’s ready to let go of them. A cemetery seems like a bad idea. Under a tree is a possibility, but … The options nag at her. Granny is silent, but very present. And Sarrocco tells many stories about her irascible grandmother, who didn’t like anyone except her granddaughter. Granny can be selfish and cruel, world weary and hungry for contact. But where and how does she want to rest?

Conversing with or feeling the presence of the dead is an everyday occurrence for this mother and her children. When Sarrocco is feeling particularly vulnerable and frustrated one morning, she says, “What if it’s all just out there, in the air?”

She explains, “All of the stuff. The things they didn’t finish. All of the things we didn’t finish with them. Everybody’s stories. The air could be full of them, you know. Like invisible tumbleweeds, catching on real live people sometimes, following them around like ghost clouds. Word ghosts. Ghost parables. What if we’re stuck all over with stories that fell out of people when they died?”

There. That’s exactly what’s going on in the book. All the stories.

Sarrocco writes well. Sometimes poetic, sometimes subtle, her skill with language is worth the read.

“I could sweep together the dust of our hearts. The ashes of my grandparents’ house that didn’t burn. The complete fire that is death. The charred wood and the pulverized concrete and the souls of a million barbecued pigs. The dust in the corners of basements. Everything that isn’t the fire itself, the movement through the wires. Everything in the way of getting through all of it rolled up together and shot into the sky, into a firework — that’s a song you could sing out over the radio. The ones on the other side can hear us, then. If we can roll all of it together and name it out loud, send it out into space on transmitters or something — then they could hear us.”

Her imagination is boundless, and she’s not afraid to soar where others have never ventured.

Sticking with the story can be a little bumpy. The author’s mind does not necessarily work in a linear fashion. Like all of us, one thing reminds us of another, and that reminds of another, and we still have to work out what we started with. If you are patient, open minded and willing to go along for the ride, “Lit by Lightning” is quite an enjoyable trip.

This first book was published in 2015 by a friend of the author who was willing to take a leap of faith. The second book, “Ill-Mannered Ghosts,” was published in 2016. The publisher calls Sarrocco’s style “collaged autobiographical shapshots, family anecdote and whip-smart, gin-dry wit.” That may be a bit much, but her writing is funny and tender as she reveals what makes a family and what makes a person.

I sure hope book three will arrive soon. She has so much more to tell us.