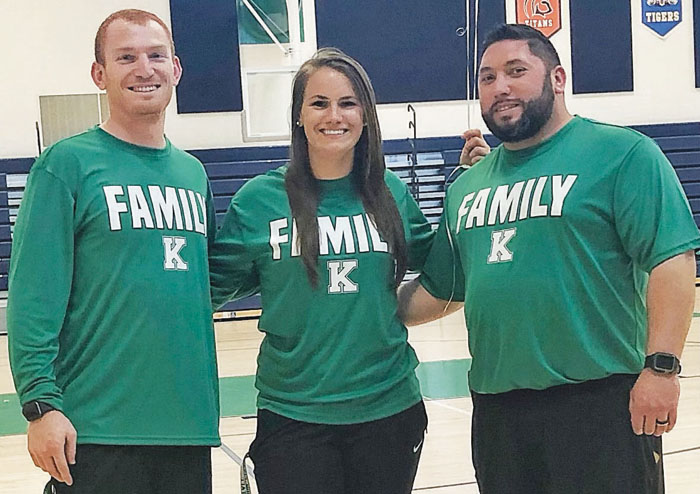 KANNAPOLIS  — Allison Parker is doing exactly what she wants to do and is doing it at an age when many of her peers are still dazed and confused, still trying to figure out what direction they want to take in life.

“I’m feeling pretty responsible and it’s a very good feeling to know that I’m a 26-year-old female and people think enough of me that I’ve been entrusted with an athletic department,” said Parker, who was recently named athletic director at Kannapolis Middle School. “We’ve got 16 sports teams. The great thing about being AD is I’ll get to have a hand in all of them.”

Parker had been serving as an assistant AD. She replaces Bob “Coach K” Kozyra, 37, who has taken a job closer to home in Iredell County.

Parker’s name is familiar to Rowan sports fans mostly because of her stellar soccer career at West Rowan. She was an all-county, all-conference and all-region defender for several stout teams and was the Post’s 2009 Rowan County Player of the Year. She graduated from West in 2011 with a shelf full of accolades and continued her soccer career at Catawba. In high school and college, she played for coach Nick Brown, who is still a mentor, an advisor and a “big brother” for her.

“His impact was huge on my career route and my success,” Parker said. “He showed me what dedication to athletes and a program really looked like. We had great success at West that I’ll always be proud of. We won the school’s first championship in girls soccer, and a lot of that success was because of Nick.”

While eight years have passed since her glory days at West, Parker said she remains close to former teammates. They’ve stayed in touch.

“Looking back on it, those were special teams and special times,” Parker said. “There were a lot of girls on that team who probably never would have been friends if not for soccer giving us something in common and bringing us all together.”

Parker had figured out by the time she was in middle school that she wanted to be a schoolteacher.

“I always was headstrong and I told my parents in middle school  that I was going to teach and that plan didn’t change through high school,” Parker said. “By the time I was a sophomore in college, I knew I wanted to be a P.E. teacher and a coach and I was starting to think about the possibility of being an AD.

“My dad told me it would be harder for a woman to be an AD, to be hired to be over boys sports as well as girls sports, but he never told me that I couldn’t do it,” she continued. “I was lucky to be raised in a household where we were told we could be anything we wanted to be as long as we were willing to work hard for it. And I’ve been fortunate. I’ve had some great people to work with in Kannapolis. Some doors have opened for me.”

Parker’s job search after graduating from Catawba was greeted by disappointment initially.

“P.E. jobs are very tough to get because when someone is hired for a P.E. job, they usually stay for a long time,” Parker said. “I didn’t have any luck at first, but I remember my grandmother, Jo Corriher, tapping me on the shoulder one day and telling me Kannapolis Middle School had an opening. I really hadn’t thought about Kannapolis before that. But I applied and I got an interview. About 10 minutes after that interview, I was hired.”

She coached girls basketball for a season at KMS and coached the girls soccer team for two seasons. The last two years, she has continued her work with that same group of girls as A.L. Brown High’s head soccer coach.

She also became assistant AD at KMS and served in that role for two years prior to her recent promotion.

As the  new director of athletics, she can count on help from assistant AD Reid Shaver, who serves as one of the school’s boys basketball coaches.

Shaver starred in football and basketball at South Rowan High and is a couple of years older than Parker.

“Reid and I didn’t really know each other in high school, but we knew of each other,” Parker said. “Reid says he knew my name from soccer. It’s funny, because we were athletes at rival high schools in Rowan County and then we went on to colleges that are big rivals, with me being a Catawba graduate and Reid going to Lenoir-Rhyne. Reid can be hilarious. The first time we met at KMS, he said, ‘Hi, I’m Reid. Go Bears!’ I like to kid him too. I tell him the only games I would score in for West basketball were when we played South Rowan.”

Parker says the athletic department at KMS is strong. Kozyra, who gave it a complete makeover, left things in very good shape.

But her school days will be busy. She’ll be teaching three P.E. classes daily in addition to AD and coaching duties.

The technology employed by ADs to keep track of and schedule and reschedule a growing number of sports is constantly evolving and more sports are being added. Sports such as volleyball and cross country that you don’t immediately think of when you talk about middle school sports, are part of Parker’s life.  More sports, such as lacrosse, are up and coming and are on the horizon.

“A lot of things have changed since I was in middle school,” Parker said. “One of the things I try to do is encourage the kids here to try different sports. Try it and you might like it. They might be surprised by how good they are at something new and the bonds you build and the lessons you learn by being part of a team are so important as you go through life.”

Parker’s younger sister, Rebecca, is a recent graduate of Georgia Southern University, where she set records in cross country and distance running in track and field. She graduated with a degree in journalism and is currently working in marketing and advertising in Charlotte.

Both Parker sisters are doing well. Allison recently purchased a house in China Grove and also bought a car.

“I’m a self-reliant person and I get to work in a place that I love,” Parker said. “Kannapolis is growing. It has so much potential.”