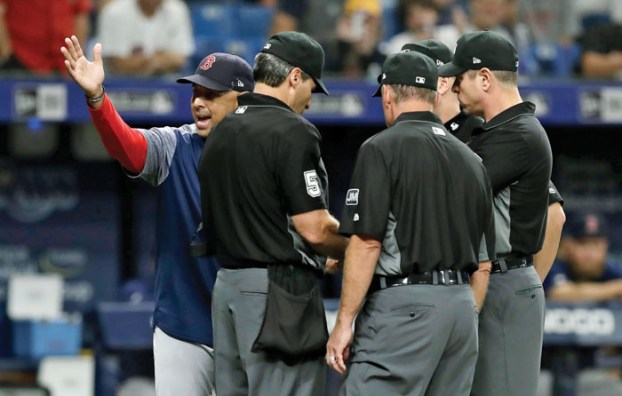 Boston Red Sox manager Alex Cora yells as he talks to the umpiring crew during the eighth inning of a baseball game against the Tampa Bay Rays Wednesday, July 24, 2019, in St. Petersburg, Fla. Cora was upset about the Rays moving pitcher Adam Kolarek from pitcher to first base and then back to pitcher during the inning. (AP Photo/Chris O'Meara) 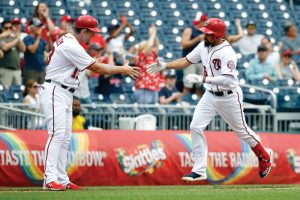 Washington Nationals’ Anthony Rendon, right, rounds the bases on a solo home run past third base coach Bob Henley in the seventh inning of the first baseball game of a doubleheader against the Colorado Rockies, Wednesday, July 24, 2019, in Washington. Washington won 3-2. (AP Photo/Patrick Semansky)

ST. PETERSBURG, Fla. (AP) — Charlie Morton struck out 11 over seven innings and the Tampa Bay Rays avoided a three-game sweep by beating David Price and Boston 3-2 in a game that the Red Sox protested on Wednesday.

Confusion reigned in the top of the eighth when a series of defensive changes involving reliever Adam Kolarek prompted Boston manager Alex Cora to protest the game due to the placement of subs into the Rays lineup after the designated hitter was removed.

Kolarek replaced Morton and retired pinch-hitter Sam Travis on a pop fly. The left-hander then shifted to first base when Rays manager Kevin Cash brought in reliever Chaz Roe, who got a fly ball from Mookie Betts.

After Kolarek then returned to the mound and Nate Lowe entered to play first base, Cora met with the umpires, which prompted around a 15-minute stoppage as the umpires discussed the matter.

After the protest was made and the game resumed, Kolarek got a first-pitch grounder from Rafael Devers.

An unhappy Cora again talked with the umpires after the third out, which delayed the start of the bottom on the eighth.

Morton (12-3) allowed two runs and five hits in lowering his AL-best ERA from 2.61 to 2.60. Emilio Pagán pitched the ninth for his seventh save.

Báez hit his 25th homer and Bryant his 21st to help Chicago avoid a three-game sweep. The Cubs bounced back from a 5-4, 13-inning loss Tuesday night to give manager Joe Maddon his 442nd win with Chicago, tying Joe McCarthy for fifth in franchise history.

Bryant left in the fifth inning because of soreness in his right knee.

Kyle Ryan (3-1), the second of six pitchers used by the Cubs in place of Lester, retired five batters. Craig Kimbrel allowed two singles in the ninth but got Brandon Belt to fly out for his seventh save.

Earlier in the day, the Cubs optioned shortstop Addison Russell to Triple-A Iowa about two months after Russell completed a 40-game suspension for violating Major League Baseball’s domestic violence policy. The move made room for catcher Willson Contreras to return from the injured list.

The Cubs lead in the NL Central was down to a half-game before tagging San Francisco starter Tyler Beede (3-4) for three home runs in the first four innings.

HOUSTON (AP) — Jose Altuve and George Springer both hit two-run homers to back up another solid start by Justin Verlander and give Houston a win over Oakland.

Houston bounced back after Tuesday’s 4-3 loss in 11 innings snapped a six-game winning streak and improved to 9-2 against the Athletics this season.

Verlander (13-4) allowed two singles and one run, which was unearned, while striking out 11 in six innings for his third straight win. Roberto Osuna allowed two hits and a run in the ninth before striking out Chris Herrmann for his 23rd save.

MILWAUKEE (AP) — Ryan Braun and Keston Hiura homered, Yasmani Grandal hit a go-ahead single and Josh Hader made a lights-out relief appearance to lift Milwaukee over Cincinnati to avoid a three-game sweep and end a five-game skid against Cincinnati.

Josh VanMeter hit his second homer and Joey Votto and Scooter Gennett had RBI hits to help Cincinnati build a 4-2 lead against starter Jhoulys Chacin. Braun kept Milwaukee close with a two-run shot in the first, his 15th homer of the season, and the Brewers rallied with Grandal’s two-run hit in the fifth.

Matt Albers (5-3) got one out for the win, and Freddy Peralta got his first save. Reds right-hander Lucas Sims (1-1) gave up five runs on three hits in 4 2/3 innings, including the homers by Braun and Hiura.

WASHINGTON (AP) — Adam Eaton and Anthony Rendon homered, and Washington beat Colorado in the first game of a doubleheader.

Washington has won 22 of 31 home games and improved to 35-15 overall since May 24, the best record in the majors in that span. Colorado has dropped eight of nine and 15 of 18 to slide seven games under .500 for the first time since April 15.

Rendon smacked the first pitch from reliever Carlos Estevez (1-1) just over the wall in left-center for his 21st home run to open the seventh, a shot that was reviewed and upheld.

Wander Suero (3-5) worked a scoreless seventh, Fernando Rodney escaped a two-on, one-out jam in the eighth and Sean Doolittle closed it out for his 22nd save in 26 tries.

J.T. Realmuto and Nick Williams homered for Philadelphia, which has won five of six.

Bryce Harper had the day off for the Phillies, but they didn’t need much offense. Velasquez (3-5) allowed four hits and two walks in 5 2/3 innings. He struck out nine.

Arizona closed out the series win with Kelly’s homer off John Means (8-6) in the fourth inning, a bounce-back performance by Clarke (3-3) and a little late-inning drama.

Arizona’s Yoshihisa Hirano and Archie Bradley worked out of bases-loaded jams in the seventh and eighth innings. Greg Holland started the ninth, but was visited by Arizona’s trainer after a walk, then was removed by manager Torey Lovullo following another walk. Yoan Lopez got the final three outs for his first career save.

ATLANTA (AP) — Brad Keller thrived in his Georgia homecoming, allowing only four hits in seven innings while adding a second-inning single for his first career RBI, and the Kansas City Royals beat Julio Teheran and the Atlanta Braves 2-0 on Wednesday night.

Keller had been 2-6 with a 4.81 ERA in 13 road starts this season. There were no signs of those road struggles as he did not allow a baserunner to reach second base.

SEATTLE (AP) — Mike Leake outpitched Mike Minor in what could be the final start for each before the upcoming trade deadline, Daniel Vogelbach hit a pair of solo home runs, and Seattle beat Texas.

Leake and Minor (8-6) have both been the subject of trade rumors — Minor more than Leake — leading up to next week’s trade deadline. But it was Leake with the better performance in his first start since taking a perfect game into the ninth inning last Friday against the Angels.

Leake (9-8) threw seven innings, his only mistake giving up a two-out, two-strike home run to Rougned Odor in the sixth inning.

Anthony Bass worked a perfect eighth in relief of Leake and Roenis Elias pitched the ninth for his 13th save.