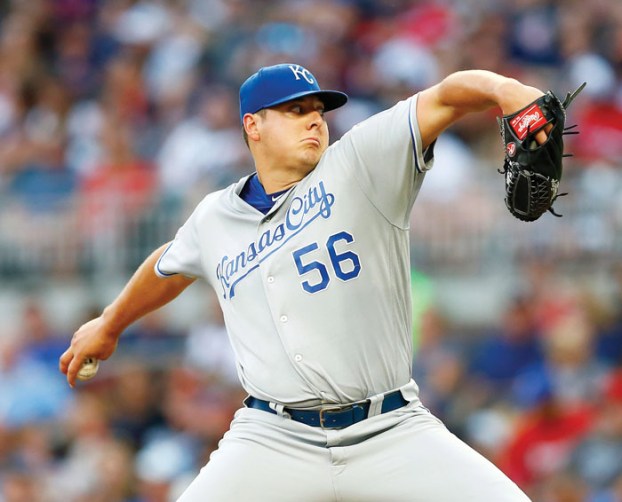 Keller allows only 4 hits, has RBI as Royals top Braves, 2-0

By CHARLES ODUM AP Sports Writer
ATLANTA (AP) — Having a hometown cheering section gave Brad Keller a boost.
Facing his hometown team may have done even more for Keller’s adrenaline.
Keller thrived in his Georgia homecoming, allowing only four hits in seven innings while adding a second-inning single for his first career RBI , and the Kansas City Royals beat Julio Teheran and the Atlanta Braves 2-0 on Wednesday night.
Keller (7-9), a 2013 graduate of Flowery Branch High School north of Atlanta, won his fourth straight decision.
“That was a blast to be able to come out here and pitch in front of my home team, I guess,” Keller said. “It was a lot of fun and a ton of adrenaline was going, especially in the first.”
Keller had been 2-6 with a 4.81 ERA in 13 road starts this season. There were no signs of those road struggles as he did not allow a baserunner to reach second base.
The big, hard-throwing Keller (6-5, 230) ended the fourth by striking out Brian McCann on a 98 mph fastball. He ended the sixth by striking out Freddie Freeman with a fastball clocked at 97 mph.
“He looked like a kid who grew up bailing hay,” Braves manager Brian Snitker said of Keller. “A big, strong guy. He was pounding his fastball. We didn’t do anything with him.”
The Royals swept the two-game series, leaving the Braves 4-4 against the American League this season. Atlanta hasn’t had a winning record in interleague play since posting an 11-9 mark in 2013.
The Braves began the day 5 ½ games ahead of second-place Washington in the NL East. The Royals have won nine of 12.
An error by Freeman at first base contributed to Kansas City’s two-run second inning. Jorge Soler, who walked, advanced to third on Bubba Starling’s double. Nicky Lopez hit a sharp grounder to third baseman Josh Donaldson, who tagged Soler as he attempted to return to the base.
With two outs, Meibrys Viloria’s bad-hop grounder bounced past Freeman for an error, allowing Starling to score. Keller’s single up the middle pushed the lead to 2-0. It was his second career hit and first RBI.
After the hit, he said he told Freeman at first base it was all luck.
“He said, ‘Was it that easy?’ ” Keller said. “I said, ‘No, that was all luck.’ Close your eyes and swing hard in case you get it.”
Through two innings, Teheran had thrown 52 pitches. Keller’s count was only 19. Teheran (5-7) was more efficient the remainder of his night as he allowed four hits with two runs, none earned, in six innings.
Teheran was helped by Ender Inciarte’s catch of Alex Gordon’s drive at the center field wall in the third.
Ian Kennedy pitched a perfect ninth for his 19th save.
TRAINER’S ROOM
Royals: RHP Jakob Junis, still listed as the probable starter for Friday night’s game against Cleveland, was placed on paternity leave. His wife, Brie, gave birth to their third child, a son named Jett Boyd, on Tuesday night. RHP Jake Newberry was recalled from Triple-A Omaha.
Braves: SS Dansby Swanson was held out with a sore heel. He banged the heel on first base in Tuesday night’s game. Manager Brian Snitker said the team wanted to “be smart about this” and take advantage of Thursday’s off day to give Swanson extra rest. … LHP Max Fried (blister on his left index finger) is expected to start Saturday night at Philadelphia instead of Sunday’s afternoon game. The Braves hope there will be less humidity to possibly aggravate the blister in Saturday night’s game. … Snitker said RHP Jacob Webb (right elbow impingement) will be on the injured list longer than first hoped.
ON BASE AGAIN
Ronald Acuña Jr.’s infield hit in the third inning extended his on-base streak to 29 games, the longest active streak in the majors. The hit was initially ruled a fielding error by third baseman Hunter Dozier. … Soler’s walk extended his on-base streak to 20 games.
ROSTER MOVE
Before the game, the Braves optioned right-hander Wes Parsons to Triple-A Gwinnett and selected the contract of right-hander Jeremy Walker, who had a combined 2.84 ERA at Gwinnett and Double-A Mississippi this season.
UP NEXT
Royals: LHP Mike Montgomery will make his second start since being acquired from the Cubs when Kansas City opens a four-game home series against RHP Adam Plutko (3-2, 4.81) and the Cleveland Indians on Thursday night.
Braves: RHP Mike Soroka (10-2, 2.46) will start Friday night’s series opener at Philadelphia.
___
More AP MLB: https://apnews.com/MLB and https://twitter.com/AP_Sports