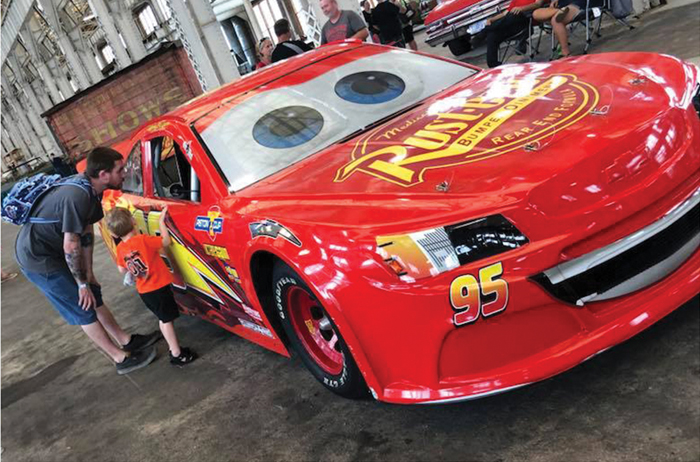 A father and his son look at a replica Lightning McQueen car during the N.C. Transportation Museum's 2018 show. Submitted photo

SPENCER — The N.C. Transportation Museum will host replica cars from the silver screen and small screen for its 2019 Celebrity Car and Truck Show on Saturday.

The replicas, created and owned by private individuals, are tributes to the movies and television shows in which they appeared.

The show will be from 9 a.m. to 3 p.m., with the celebrity cars on view in the museum’s Back Shop. Admission is included with a regular museum ticket.

Ages 2 and younger are admitted free.

Advance tickets are available at www.nctrans.org.

In some cases, the cars truly were the stars. Despite being animated on the silver screen, vehicles from the movie “Cars” are replicated as Lightnin’ McQueen, Tow-Mater, Cruz Ramirez, Filmore, and Jackson Storm. All are scheduled to appear.

A replica Bumblebee Camaro from “Transformers” and the Pizza Planet truck featured in “Toy Story” and other Pixar films will be part of the show.

“These cars may be replicas, but they sure look like the real thing to me,” said show organizer June Hall. “It’s really fun to see our visitors’ eyes light up as they recognize each vehicle, things that they’ve only seen in movies and on TV.”

Other icons from the big screen will include the Ghostbusters Ecto No. 1 replica, a 15-foot blow-up Stay-Puft Marshmallow Man and the Family Truckster station wagon from “National Lampoon’s Vacation.” The “Smokey and the Bandit” Pontiac Fire Trans Am will return for a second year. A replica Jeep from the first “Jurassic Park” movie will appear along with a Park Warden truck from the “Jurassic World” series with a dinosaur theme for kids.

Classic television will also be well represented with a police cruiser from “Adam 12” and the Mayberry squad care from “The Andy Griffith Show.”  The Mystery Machine from “Scooby Doo” also is included.

Two muscle cars, the “Starsky and Hutch” Grand Torino and the General Lee from “The Dukes of Hazzard,” are also slated to appear.