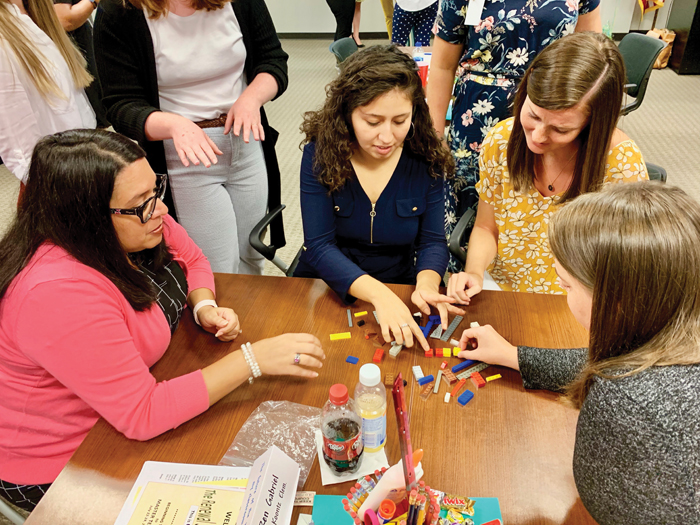 SALISBURY — With two and a half weeks until the start of the 2019-20 academic year for Rowan-Salisbury Schools, a new crop of teachers gathered Monday to ready themselves for their first year at the helm of classrooms across the district.

“Today is all about helping these educators develop a better understanding of what our district is all about — the vision, the mission of our schools,” Rhone said, adding that the 40-member group is an average number of new hires for the system.

As with all things Rowan-Salisbury these days, a central component to understanding the system is developing a familiarity with its status as a renewal school system, which gives charter-like flexibility to schools throughout the system.

“Renewal is a shift in thinking,” said Rhone. “We’ve parted our ways with doing traditional practices and are trying to do something more hands-on, giving students an opportunity to experience things that they’ll experience in the real world.”

Reflective of a shift away from desks and lectures, leaders of the school system’s curriculum and instruction department led the group through an exercise using Legos. The teachers worked in groups to re-create a small structure with only one person in each group allowed to see the structure and relay its layout.

She, in turn, would relay the message to “communicators”: principals and lead teachers who could bring methods to the school level.

Then came where the proverbial rubber meets the road.

“Principals take that to educators,” said Saunders. “Our educators are our builders. They’re building instruction, building lessons. You are the ones who are putting the actual Legos together.”

Renewal, said Saunders, is fostering opportunities for these roles to change, allowing educators the opportunity to serve in “visualizer” capacities that will reshape the face of local education.

First-year teacher Lamar Davis, who will teach drama and chorus at West Rowan High School, said the concept of renewal had been invigorating.

“At first, I thought, ‘Uh-oh, does this mean there’s going to be a lot of changes? Should I expect things to change on a daily basis?'” Davis said.

But then presenters explained that renewal is educator-driven through teacher-led design teams at each school.

“I think it’s great that they went to teachers first for those changes because it’s not something that many districts would even think about doing: asking the teachers to be not just part of the change but to actually facilitate it and develop the plans,” said Davis. “That was really cool. From that point, I was on board with renewal.”

Susan Heaggans, director of initially licensed teachers, said the week’s on-boarding is an effort to increase understanding and a sense of community among first-year educators and is a critical facet of the system’s retention. The orientation session was offered alongside district support mentors and site support leaders at each campus for an intense community of support during new educators’ first three years.

“Beginning teachers … are so energetic and excited about their first teaching positions,” said Heaggans.  “We’re just glad to have them here in Rowan-Salisbury Schools, especially in a time when there’s an educator shortage. We’re fortunate to be able to fill our positions.”