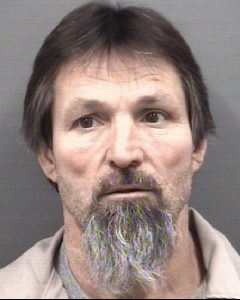 KANNAPOLIS — A Kannapolis man is accused of breaking into two Kannapolis homes and stealing thousands of dollars worth of construction equipment and tools.

The Rowan County Sheriff’s Office says Tony Hall, 52, of the 500 block of Kimball Street, was caught in the act taking tools and equipment from a home in the 100 block of Tanglewood Drive. He also is linked to a break-in at a home in the 300 block of Spring Garden Avenue.

The owner of the Tanglewood Drive home told sheriff’s deputies that he went to eat breakfast about 10 a.m. Saturday. When he returned, a man with a salt-and-pepper mustache, believed to be in his 50s, standing in the driveway near a new black Dodge Ram 1500 truck.

The homeowner confronted the man, who told him his name was Tony Hall and that someone named Billy sent him to mow the grass. The owner said Hall had his string trimmer in the back of the pickup. Hall told the owner the trimmer was his and denied taking it from the two-car detached garage.

The owner parked his car in front of the pickup to block it, but Hall jumped into his truck and squeezed between the car and a tree. He sped out of the driveway with the string trimmer falling to the ground.

The homeowner followed the pickup and called 911. He said the truck driver was weaving in and out of traffic and running stop signs.

The homeowner lost sight of the pickup near Enochville Elementary School and returned home to wait for authorities.

He told deputies that his normally neat garage had been ransacked. The garage door window was broken and there were pry marks on the door.

When the owner returned to the truck, the deputy stopped it and noted that two men were inside. The pickup had a Kentucky license plate. One man ran from the truck. A K-9 unit was called in to track the man, who is believed to have been Tony Hall. Deputies were unable to find him.

The other man, Jonathan Hedgepath, told deputies that Hall went to Tanglewood Drive and stole numerous items, then picked Hedgepath up because he needed help moving the stolen goods.

Hedgepath confessed to taking stolen items to pawnshops and other places. He also told deputies about a break-in on Spring Garden Avenue.

He denied involvement in the thefts but said he knew the items were stolen.

Hedgepath said he had been taking items to the pawnshop for Hall since May. He said additional items could be found at Hall’s Kimball Street home. Hedgepath told deputies the pickup was rented by Hall and his wife and that most everything in it had been stolen from the Tanglewood Drive home.

KANNAPOLIS — Unveiling the findings from Cabarrus County’s 2018 “State of the County Health Report” to the Kannapolis City Council... read more