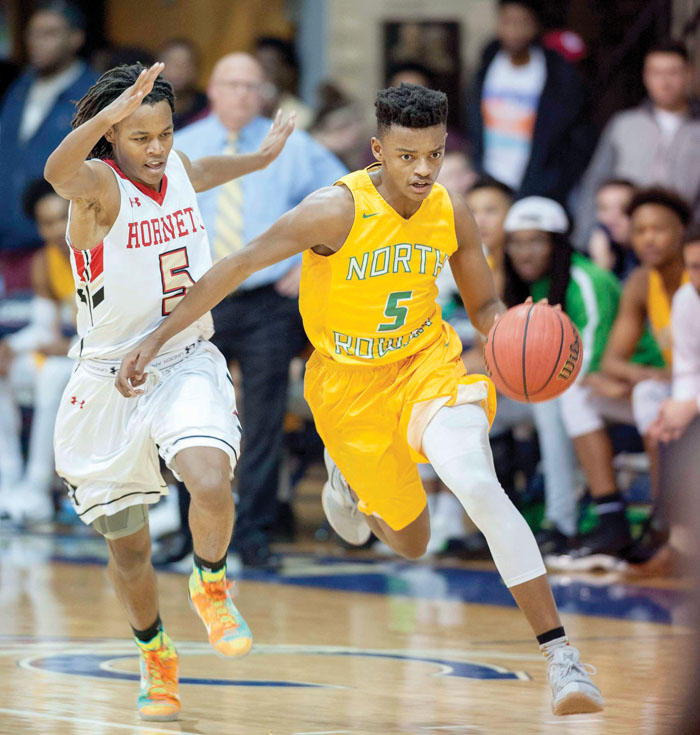 JON C. LAKEY FILE PHOTO/ SALISBURY POST ... North Rowan’s Derrick Page, right, shown during a game against Salisbury in the Sam Moir Christmas Classic at Catawba College. Page has announced that he will be attending Catawba this fall, to continue his education and basketball career. Cam Gill, left, defends.

“The recruiting process was a long ride, but there’s nothing like home,” said Page, a rangy point guard who is almost 6-foot-3. “There are a lot of advantages to staying home.”

While most players good enough to be recruited were primarily scorers in high school and have to reinvent themselves in college, Page is ahead of the curve.

He already has made the transition to being a team-first, pass-first point guard and floor general. He averaged only 7.5 points per game as a senior while playing with a pair of high-flying, nearly unstoppable forwards — Yadkin Valley Conference Player of the Year Brevin Goodlett and  Rowan County Player of the Year Dayjuwon Cooke — but Page knew what his job was. He understood percentages and recognized where the ball needed to go.

While Page scored a modest 234 points as a senior, he helped Goodlett and Cooke pour in — and throw down — a combined 1,116. Page plays the game mostly on the floor, rather than in the air, but he plays it with his head and his heart. Without him, North doesn’t go 28-3, one of the best seasons in school history, and doesn’t reach the state semifinals in 1A.

There were YVC blowouts, such as the 68-22 wipeout of North Moore, in which Page didn’t score at all because he didn’t have to. His double-digit scoring games came when North needed points — against West Rowan, against South Stanly and North Stanly in YVC struggles, against Community School of Davidson and Bishop McGuinness in the state playoffs.

“From Christmas to May, Derrick grew by leaps and bounds as a player, grew more than any player we had,” North coach Jason Causby said. “His shot has come a long way. He’s worked hard on making some mechanical improvements, and he made a lot of big shots for us down the stretch. He’s not going to be flashy, he’s probably not going to do jaw-dropping things, but if you’re looking for a guy who knows the game and is almost always going to make the right play, then Derrick is your guy.”

It was late in the recruiting process, well into the spring, when Page was invited to attend an open gym at Catawba and to participate in pickup games against Catawba players. It was a test to see not only if he could survive against them physically, but to see how well he fit in as far as personality and temperament.

“How good Catawba’s guards were surprised me a little bit, but I think most people don’t realize how good Catawba’s players are or how strong they are,” Page said. “They weren’t just talented, they were high-character guys and down-to-earth guys. From the start, I felt like I fit right in.”

Catawba put an offer together for Page not long after that tryout. There’s athletic money involved, but most of the scholarship package was based on Page’s solid academic record.

Catawba returns 10 players from the 25-8 team that made huge strides last season by taking the South Atlantic Conference Tournament and winning a Division II regional game.

Three of those 10 returners will be senior guards, including standouts Devin Cooper and Marcell Haskett. So it’s likely that if everyone stays healthy, Page will redshirt next season.

“He’d be able to mature physically and get stronger and he’d benefit from working in practice for a year and learning from the coaching staff as well as the players,” Causby said. “You don’t want to burn a year when you might not play much.”

As far as the academic side of things, Page is as excited about Catawba’s exercise science program as his basketball opportunity.

He will be missed at North. Every time a wayward pass on a fast break ricochets off a wall of the North gym next season, Causby will think about Page and will miss him.