Former Livingstone QB has another great season in IFL 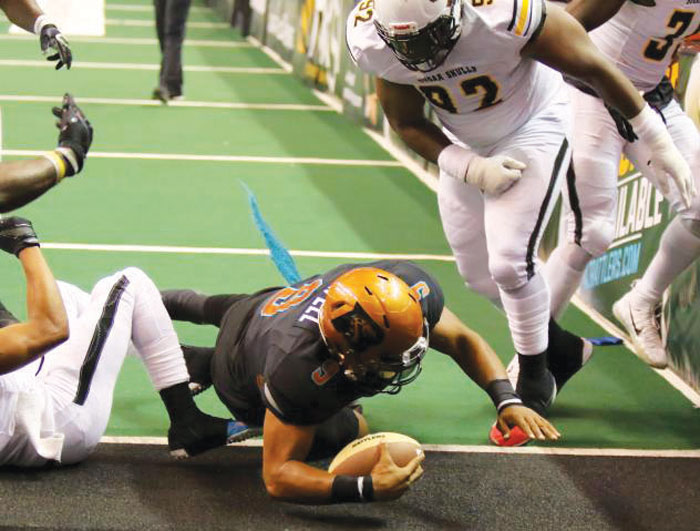 OurSportsCentral.com Photo/Arizona Rattlers ... Arizona Rattlers' quarterback Drew Powell dives into the end zone for a touchdown against the Tucson Sugar Skulls on June 8, in Phoenix. The Rattlers won, 50-49. Powell is a former Livingstone QB, playing at the Salisbury college in 2012-15.

Drew Powell already has a legacy at Livingstone College. Now, he’s working on one in professional football.

Powell’s Arizona Rattlers lost to the Sioux Falls Storm, 56-53, in the United Bowl, in front of 14,635 fans at Gila River Arena in Glendale, Ariz.

In 2018, Powell quarterbacked the Iowa Barnstormers to the IFL title, winning the United Bowl, 42-38. He was the league MVP last year as well.

The 2019 IFL season began in late February, and according to Malcolm Nelson, a defensive coach who was with Powell at Livingstone and in Iowa last season, the QB was attending tryouts for the Canadian Football League and others.

When those opportunities did not work out for Powell, the IFL gladly welcomed him back. He signed with Arizona on April 23, when the Rattlers were already 8-0.

With Powell at the helm, the Rattlers reeled off seven more victories, and were 15-0, going into the United Bowl. But even though Arizona was playing on its home field, Sioux Falls took the title, improving to 14-3.

Powell, a 6-3, 220-pound lefty, completed 16-of-21 passes for 166 yards and two TDs in the United Bowl. He also ran for two scores, including an 11-yard dash to the end zone with just 53 seconds remaining. It appeared that Powell was going to will his team to a comeback victory.

After Powell’s late score and a two-point conversion, the Rattlers were within three points. However, they failed on an onside kick attempt and Sioux Falls ran out the clock.

“It was a great season,” Powell said by telephone on Tuesday, from his home in Upper Marlboro, Md. “The fans were great. Unfortunately, we lost that last game, but those things happen. Collectively, we all could have done a better job that night, myself included. We just have to learn and grow from it.”

He also rushed for 939 yards and 23 more TDs. That’s 57 times that Powell got the football into the end zone.

Powell was responsible for 97 touchdowns, either passing or running, during the last two IFL seasons — in just 23 games.

“The indoor game is fun to play, but sometimes, I do miss the outdoor game,” continued Powell. “And there’s just more money for salaries in the outdoor game (due to the bigger attendance capacities in stadiums). But it’s fun to score a lot of points and sometimes, it seems like we’re scoring a touchdown on every other play.”

So why hasn’t Powell, just 24 years old, been able to catch on with a team in one of the outdoor leagues? He says there has been some “almosts, but things just haven’t worked out.”

In other words, there just hasn’t been that right place at the right time moment.

“At this point, I don’t believe it can be anything football-related,” said Powell. “I have proven that I can play. It might be on the personal side … you know, get in the right circle or meet the right people or shake the right hands. But on the field, I feel that I’ve done all the right things.”

He’s been a little unlucky as well. Powell seemed to be on the verge of sticking in the CFL after signing with Saskatchewan last October, but head coach Chris Jones took an assistant coaching job in the NFL with the Cleveland Browns. “He liked me, gave me a chance and felt like I was athletic enough, but when he left, things were up in the air as far as the CFL goes.”

He also worked out for the short-lived Alliance of American Football (AAF), but did not receive an offer from the new teams. As it turned out, the league folded before completing its first season.

So, this summer and early fall, Powell plans to continue his offseason training program. And, unless someone calls, he’ll return to Arizona.

“Yes, that’s the plan right now,” Powell added. “I want to begin creating a legacy by staying in one spot for a while. I want to be a fan favorite where everybody knows me. I’ve been bouncing around a lot and I’m ready to build a foundation somewhere. If the NFL or CFL don’t call, I just want to establish my name and build up my career with the Rattlers.”

Powell is being modest. He has most definitely established his name in the IFL. Had he played the entire 2019 season in Arizona, Powell would probably own back-to-back IFL MVP awards.

NOTE: Powell says that from a distance, he keeps an eye on his alma mater in Salisbury. “I was down at a Livingstone practice, before the first game last season,” said Powell. “I still keep in touch with Coach (Daryl) Williams. And some of the guys I played with are on the coaching staff there, so I keep up with what’s going on.”