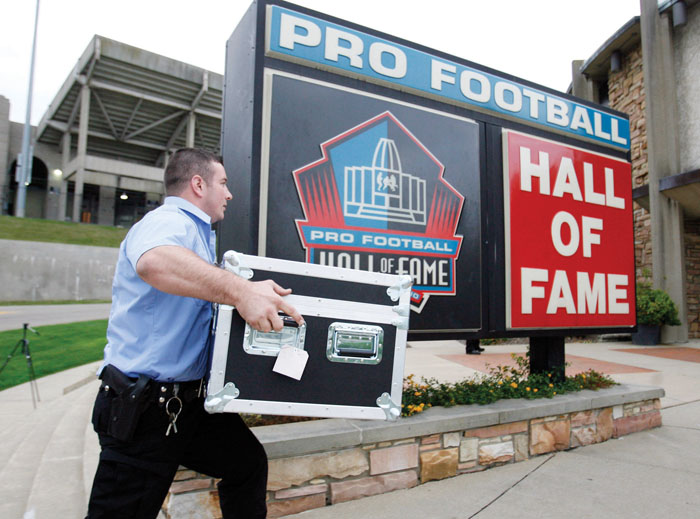 FILE - In this Sept. 28, 2018, file photo, the Vince Lombardi Trophy, produced by Tiffany & Co., is delivered to the Pro Football Hall of Fame by a representative of Brinks, who did not want to be identified, in Canton, Ohio. Approximately 250,000 visitors tour the hall annually, a group that includes rookies from the Cleveland Browns and Philadelphia Eagles this year alone. Small groups can go behind the scenes touring the Ralph Wilson, Jr. Pro Football Research & Preservation Center with an archivist. (Scott Heckel/The Canton Repository via AP, File)

Visitors to the Pro Football Hall of Fame can see both the football Drew Brees threw in becoming the NFL’s all-time passing yards leader and the uniform the Saints quarterback wore while making history.

Hall of Fame officials had been monitoring Brees’ chase of Peyton Manning’s record, hoping the quarterback would set the mark Oct. 8 at home in New Orleans. Brees did just that before halftime — with a touchdown no less — allowing the game to be stopped. Brees walked to the sideline and handed the ball to David Baker, the hall’s president and chief executive officer.

“It was perfect,” said Saleem Choudhry, vice president of exhibits and museum services. “He threw a 62-yard touchdown and eclipsed a record. We stopped the game. He comes over, shakes David’s hand, hands him the ball. It was a very unique moment. I just kick myself sometimes that I was right down there to observe that, but those are some great moments that occur . . . that you can plan for it.”

Some NFL records, such as Tennessee running back Derrick Henry matching the longest touchdown run at 99 yards last December, mean a quick email to the team asking for an item to commemorate the moment. Henry and the Titans sent his No. 22 jersey, just one of approximately 50 significant moments in the 2018 season marked by the hall.

“The great part of a football uniform, there’s lots of pieces and parts,” Choudhry told The Associated Press.

Displaying all those items is both the task and challenge of the Pro Football Hall of Fame , the museum for a game in which the NFL enters its 100th season this fall with both history and records made regularly. Since opening in 1963 in Canton, Ohio, the hall just keeps growing, with a now 135,000-square foot building still not enough space to display all the jerseys, helmets, balls, gloves, Super Bowl rings and, of course, Hall of Fame busts.

“We have a massive exhibit area but have probably close to 97% of the information, documentation and artifacts that we preserve here not on display,” archivist Jon Kendle said.

The Hall of Fame has more than 40 million pages of documents, including one showing the birth of pro football in 1892 in Pennsylvania with a $500 payment by a team called the Allegheny Athletic Association to play in a game against a big rival. It was found in a closet of the Pittsburgh Steelers. There are more than six million photos in a collection that keeps growing.

As a museum, the hall’s mission includes preserving the history of pro football and the game’s big moments. And yes, officials know exactly where every piece is, especially those in storage; everything is catalogued and accessible.

“We constantly are plucking things in and out from our collection to feature in an exhibit if we’re developing something, or in a traveling exhibit, or as we continually refresh our exhibits in the hall itself,” Choudhry said.

Preservation comes first. An item such as a leather helmet that may be more than 75 years old might need to be stored in a box away from light and avoid being put on display for the 363 days the hall is open each year; it’s closed for Thanksgiving and Christmas. Or a jersey that’s been on display for a couple of years could need some time to simply rest on a shelf.

“We’re fortunate enough that we have several Johnny Unitas jerseys, so we could just swap it out for another, or we showcase another player that we’d like to bring into the limelight,” Choudhry said.

Approximately 250,000 visitors tour the hall annually, a group that includes rookies from the Cleveland Browns and Philadelphia Eagles this year alone. Small groups can go behind the scenes touring the Ralph Wilson Jr. Pro Football Research and Preservation Center with an archivist.

An additional 700,000 are expected to attend at least one of the events at this year’s enshrinement ceremonies, which feature a new locker exhibit with items from the inductees , such as two Super Bowl commemorative jackets owned by the late Broncos owner Pat Bowlen. Or Tony Gonzalez’s Kansas City Chiefs jersey worn Jan. 1, 2005, when he broke the NFL record for most catches in a season by a tight end.

Gonzalez has been to the hall four times, including for the inductions of Warren Moon, Marcus Allen and Michael Strahan. The coolest place? The Hall of Fame gallery with all the busts where no music is piped in and voices stay low as if in a church.

“When you walk in there and see all the busts with the stories underneath, that’s the goose bumps,” Gonzalez said. “That’s the ‘Oh my God, this is where it’s at.’ And to be sitting there when I was younger and I went to Warren’s or Marcus’, I didn’t even let my mind go there because I knew getting wrapped up in the future is not going to help me now. When I think of my family, my mom, I can’t wait for them to see that part of it.”

Other galleries at the museum include one on the NFL’s first century, the Game For Life holographic theater detailing the values football helps build and featuring stories of Jim Kelly’s fight against cancer, and the Lamar Hunt Super Bowl area highlighted by Super Bowl rings and a Lombardi Trophy, perfect for photos.

Items also are featured in smaller exhibits around the hall, shared with teams for events, and in exhibits sent around the country. A 6,000 square-foot exhibit showcasing the best of the Hall of Fame has been touring the country since 2012 and will open next in September in Miami, where it will remain through the Super Bowl in February. The hall also has a showcase at the draft and each season’s kickoff celebration, including Sept. 5 before Green Bay opens in Chicago.

Chris Johnson has had several items sent to the hall during his playing career. The former Tennessee running back will be attending the induction of his star teammate, center Kevin Mawae, on Aug. 3.

“That’s definitely something on my bucket list where I want to go through there and see what I have actually in there, honestly,” Johnson said.

He may need an assist from someone such as Choudhry, Kendle or curator Jason Aikens.

FOXBOROUGH, Mass. (AP) — Super Bowl MVP Julian Edelman was seen wearing a brace or splint on his left thumb at a youth camp he organized last weekend and he will reportedly be limited for three weeks.

Pictures of Edelman taken over the weekend show him with a device on his thumb. He was wearing gloves on both hands.

According to published reports, Edelman will be limited for the first three weeks of training camp, which starts Thursday. The regular season begins Sept. 8.

The 33-year-old Edelman missed the first four games last season after violating the NFL’s policy on performance-enhancing drugs. In the 13-3 victory over the Los Angeles Rams in the Super Bowl, he caught 10 passes for 141 yards and was the first receiver to earn MVP honors in 10 years.