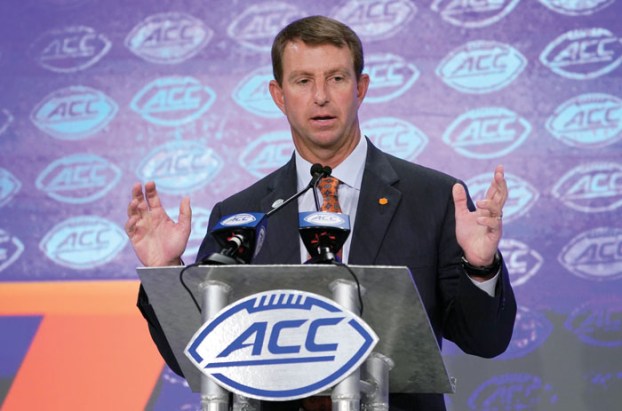 The reigning national champions placed 13 players on the 27-player team released Tuesday by the league following a vote of 173 media members last week at the conference’s media days.

Quarterback Trevor Lawrence was picked as the preseason player of the year with 127 votes. Lawrence started the Tigers’ final 11 games in 2018 and threw for 30 touchdowns with four interceptions while leading them to their second national title since 2016.

Joining him on the preseason all-ACC team were 2018 league player of the year Travis Etienne at running back, receivers Tee Higgins and Justyn Ross, four offensive linemen and five defensive players.

SPARTANBURG, S.C. (AP) — Two-time defending Southern Conference champion Wofford has been picked by the league’s head coaches and the media to win the title again this season.

The Southern Conference announced the results Monday at its annual preseason football gathering.

Wofford, which finished 9-4 last season, finished ahead of Furman and East Tennessee State in both polls. Chattanooga was picked fourth by the coaches while Mercer took the fourth spot in the media voting.

EX-FLORIDA COACH MCELWAIN GETS ANOTHER SHOT AT CENT MICHIGAN

The former Florida coach didn’t plan for his gig at Michigan to last less than a year.

Central Michigan, though, offered McElwain another chance to lead a college football team and he took it.

“This wasn’t something I was looking to do,” McElwain insisted Tuesday at the Mid-American Conference’s football media day. “I really like the vision and direction of the school.”

Central Michigan won only one game last season under fired coach John Bonamego, who led the program to bowl games the previous three years. McElwain was fired late in the 2017 season at Florida with a 22-12 record over two-plus seasons.

McElwain is one of four coaches making his MAC debut this season along with Thomas Hammock at Northern Illinois, Bowling Green’s Scot Loeffler and Tom Arth at Akron.

Frank Solich, entering his 15th year at Ohio, is at the other end of the experience spectrum in the conference. The former Nebraska coach is expected to have the team to beat.

Solich has won 106 games at Ohio since 2005 and is five wins away breaking the MAC’s coach record for victories set by Herb Deromedi from 1978-1993 at Central Michigan.

The MAC’s quartet of first-year coaches has a long way to go to catch Solich.

Hammock, who previously coached running backs for the Baltimore Ravens, seems to have the best chance to win right away.

The former Huskies running back and assistant coach is leading the defending MAC champions and a program with only one losing season in 10 years. Hammock replaces Rod Carey, who left for Temple after leading the school to a 52-30 record and six bowl games in seven seasons.

“These men won a championship last season and they expect another championship,” he said.

Loeffler is also getting his first opportunity to be a head coach. Unlike Hammock, he is taking over a program that has fallen on hard times. The Falcons averaged just three wins the previous three seasons and Loeffler is their fifth coach in five seasons.

“We’re just trying to get back to the standards Bowling Green has had and will have again,” Loeffler said.

Arth is moving up the coaching ladder after leading Chattanooga and John Carroll. He is succeeding Terry Bowden, who was fired with a 35-52 record over seven seasons.

“It means a lot to me to have an opportunity to bring my family to a special place that is just 30 minutes away from where I grew up,” said Arth, who is from Westlake, Ohio. “I understand how much success of the football team means to Akron and Northeast Ohio and I’m very motivated to help establish a successful program.”

By Teresa M. Walker AP Pro Football Writer Visitors to the Pro Football Hall of Fame can see both the... read more