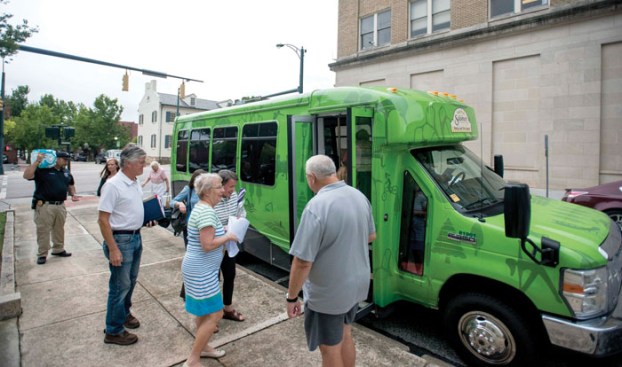 Members of the Salisbury Community Appearance and Housing Advocacy commissions board a bus with city officials on Tuesday to discuss applications for this year's BlockWork project. Jon C. Lakey/Salisbury Post

City considers which blocks should receive help during BlockWork program

SALISBURY — When you do some work for a depressed neighborhood, you set the stage for more, says Barbara Perry, chairwoman of the city’s Housing Advocacy Commission.

Perry was among several members of the Salisbury Community Appearance Commission and Housing Advocacy Commission who met with city staff members Tuesday to discuss applications for this year’s BlockWork project.

Alyssa Nelson, urban design planner for the city, led a group of about 13 as they viewed and discussed seven city blocks that are being considered for BlockWork. The annual project dates back to 2010, when it was developed by the Community Appearance Commission’s Neighborhood Leaders Alliance. The one-day project brings together volunteers to clean up the facades and yards in a city block.

As it rained intermittently, Stephen Brown drove the 13 commission members and government officials around Salisbury. The bus slowly moved through the city so that they could get a good view of the areas being considered.

Participants paid attention to factors such as how many homes on the block are owned versus rented; whether there was interest expressed in helping with the project from neighborhood residents; who submitted the application; what impact the project would have on the surrounding are; and the types of homes on the block and the work they needed.

Carpentry, painting, landscaping and general cleanup are examples of the type of work the project has tackled in the past.

“If you go in and fix up a neighborhood, it keeps pushing the bad away because people feel safe,” Perry said. “Our goal is to work toward more safe and affordable housing.”

She was involved in launching the program, which she said was partly inspired by the theory of “broken windows” policing. The theory holds that disorder such as broken windows further perpetuates crime, and it has been used in policing since the early 1980s. But there have been questions about whether it captures the true origin of crime within a community’s social dynamics.

A presentation noted that the criteria are feasibility, impact and being able to finish the project in one day. Other considerations it listed include the size of the team in relation to the block, neighborhood involvement and the scope of the project.

Among other things, discussion after the drive focused on how the project would pan out.

Although those at Tuesday’s meeting didn’t decide on a block, the group narrowed those being considered to two. The project is scheduled for Oct. 26, National Make a Difference Day.

As far as the impact of the program, Perry said having people in the neighborhood care about the project and participate are crucial parts of the process. Improvements made by past projects have mostly been maintained, she said. Some houses improved as part of past projects have been sold because of the improvements.

She and other commission members also see a connection between the crime rate and the appearance of houses and neighborhoods.

Neighborhoods gear up for National Night Out

SALISBURY — Call it a citywide icebreaker: National Night Out is designed to let residents know that their local law... read more