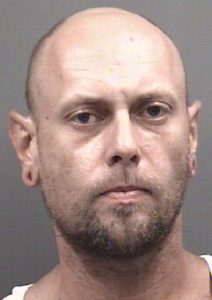 A Rowan County Sheriff’s Office deputy met with Wilhelm at Emmanuel Church and Old Beatty Ford roads. Wilhelm was in a Nissan, and the deputy noted in a report that the license plate on the vehicle was registered to a Ford.

Wilhelm was sweating profusely, the deputy reported. The officer determined that there had been no abduction and noted there was a 9 mm handgun in the vehicle’s cupholder. The deputy asked Wilhelm to secure the weapon.

Wilhelm gave the deputy consent to search his vehicle, and the deputy found a syringe in the passenger side door. A search of Wilhelm turned up a red bag in his pocket with a substance believed to be crystal meth inside. The deputy also found 50 rounds of ammunition in Wilhelm’s pocket.

Wilhelm was in possession of half a gram of methamphetamine, the deputy reported.

Wilhelm was issued a $4,000 secured bond and was released from the Rowan County Detention Center.

By Shavonne Walker shavonne.walker@salisburypost.com SALISBURY — A police officer who was getting gas at a local station charged a man... read more