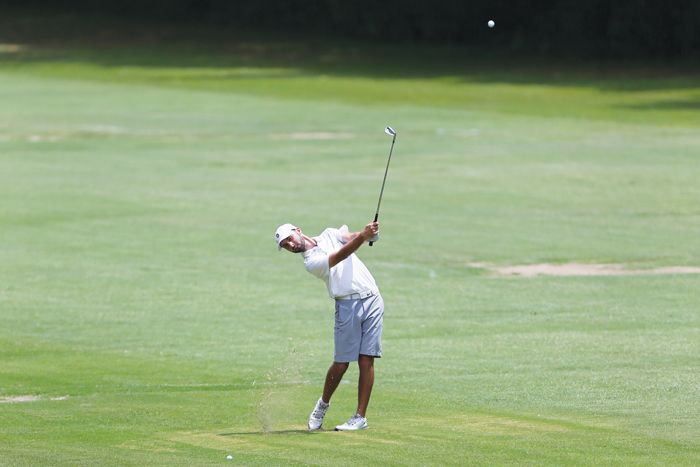 SALISBURY – As far as local golf competition is concerned, there is Nick Lyerly and then there is everyone else.

The latest affirmation came Sunday afternoon at Corbin Hills Golf Club as Lyerly won the 41st annual Horace Billings Rowan Amateur tournament, posting a 5 and 3 win over Kevin Lentz. It was his second consecutive title in this event and third overall. Lyerly, 20, is an East Rowan graduate and a rising junior at UNC-Greensboro.

For the past five years, Lyerly’s impressive resume includes high school state championships, Southern Conference titles at UNCG, a win in the N.C. Amateur and the Eastern Amateur. He just qualified for the prestigious U.S. Amateur tournament for the second year in a row..

This summer alone, Lyerly has claimed championships in the Rowan Masters at The Warrior in June and now, in the Rowan Amateur.

“In my 30 years of playing local golf, Nick is the best I have seen,” said Lentz. “I have seen them all for 30 years and there are many good ones, but he is the best.”

Lentz, 39, of Salisbury, is an accomplished golfer in his own right, but has lost to Lyerly in the past two Rowan Amateur finals and again, in 2016 to four-time winner Keith Dorsett. “I guess sometime when Nick is playing in another tournament and Keith gets sick, I might just slide right in there and win one,” he said, with a chuckle.

Sunday afternoon’s finals may have provided an opening for Lentz to break through, as Lyerly started the match with some uncustomary errant shots. But like all elite golfers, Lyerly was able to recover.

On the first hole, Lyerly hit is second shot over the green but he calmly chipped in from 30 feet for a birdie to win the hole. On the par-4 fourth, Lyerly’s drive went way right into the woods, but he deftly punched the ball to the green, 20 feet from the hole. Lyerly drained the putt for another  birdie while Lentz missed his birdie from 10 feet. Suddenly, Lyerly was 3-up and in control.

“Yeah it wasn’t the prettiest start to the match for sure,” Lyerly said, “but I got some good breaks and was able to capitalize. Fortunately, my errant shots ended up in okay spots and I was able to make good recovery shots.”

By the 7th hole of the finals, Lyerly was 4-up after his fourth birdie and seemed to be in full control. But Lentz made a strong run to get back in the match by winning the 8th and 9th holes, cutting the margin to 2-up at the turn.

“I had a little concern because Kevin is a good player and he had all the momentum at that point,” Lyerly said. “I knew I somehow had to change the momentum back to my side.”

Both Lyerly and Lentz reached the championship match by winning in the semifinals earlier Sunday morning, each by scores of 3 and 2. Lyerly topped Shane Benfield while Lentz defeated Steve Gegorek. A field of 32 golfers started the match play event last Friday after advancing from a qualifying round the previous weekend. Lyerly was top seed as defending champ while Dorsett earned medalist honors with a qualifying round of 66.

In preparation for the US Amateur, Lyerly heads out Monday to the Buffalo, N.Y. area, to compete in the Porter Cup tournament at Niagara Falls Country Club. The event is a top national event for amateur golfers, mostly from the college ranks. He will head to Pinehurst for practice rounds a few days before the August 12 opener of the U.S. Amateur at Pinehurst No. 2. Then, it’s back to UNCG for his junior year.

Whether he is competing in the Rowan Amateur or the U.S Amateur, Lyerly flatly states his approach is always the same.

“It is still business, still a tournament and I still want to win,” he says. “I am not out here just to have fun and not care how I play. I always want to win and I know I always have to play well to win, no doubt about it.”