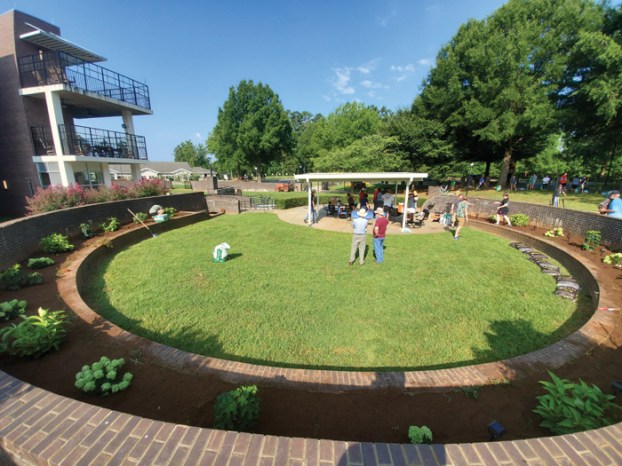 Josh Bergeron / Salisbury Post - Plants sit inside of a brick structure that's part of a "healing garden" adjacent to Building No. 42 at the W.G. "Bill" Hefner VA Medical Center. Volunteers placed the plants in the garden Saturday as part of a partnership between AMVETS and Lowes Home Improvement.

SALISBURY — A partnership between the AMVETS organization and Mooresville-based Lowe’s on Saturday brought about 50 volunteers and a collection of new greenery to a garden at the W.G. “Bill” Hefner VA Medical Center.

As temperatures rose into the 90s Saturday, volunteers planted 20 Confederate Jasmine plants, a flowering vine, and 25 2-gallon Hydrangea, a type of flowering shrub, outside of building 42 on the Salisbury VA’s campus. The plants were in addition to black, solar LED lights.

Lowe’s brought volunteers, plants and tools. VA employees were on site. And in addition to representatives from the national AMVETS office, there were folks from AMVETS Post No. 845 in Rockwell.

It was the first garden project as part of a partnership announced in May between AMVETS and Lowe’s, which chose the Salisbury VA, in part, because it was close to the company’s headquarters.

As part of the partnership, Lowe’s provided the veterans organization’s career center with $500,000, said Bunmi Moses, an Air Force veteran and senior development associate for AMVETS. That money is geared toward helping veterans transition into skilled trades. And Saturday’s project is proof that the transition is not one that goes directly into a job, said Mike Piper, head of military recruiting at Lowe’s.

“We want to be holistic. How do we help you come back, not just with a job, but into civilian life as well?” Piper said.

The garden is adjacent to a building that houses a community living center — where veterans stay for short periods of time or, in rare cases, for the rest of their lives and receive care that’s similar to what’s offered in a nursing home, the Department of Veterans Affairs says.

“One of AMVETS priorities is helping with veterans’ health care and this healing garden serves to bring a sense of calm, comfort and peace to the patients, to caregivers and their families and loved ones,” Moses said. “We’ve got young veterans in there who have injuries from serving in Afghanistan or other areas. So, this is to benefit everybody.”

Salisbury VA Director Joseph Vaughn said the garden would give veterans a place to “come reflect and do some mental and spiritual healing.”

There’s more planned for the Building 42 garden, including potentially some sculptures, said Chris Gilbert, supervisor of plans and projects at the Salisbury VA.

By Liz Moomey liz.moomey@salisburypost.com SALISBURY — Years ago, Sue McHugh was performing around Salisbury when she had a realization: the... read more

Hornets up 28-14 at halftime of state championship game