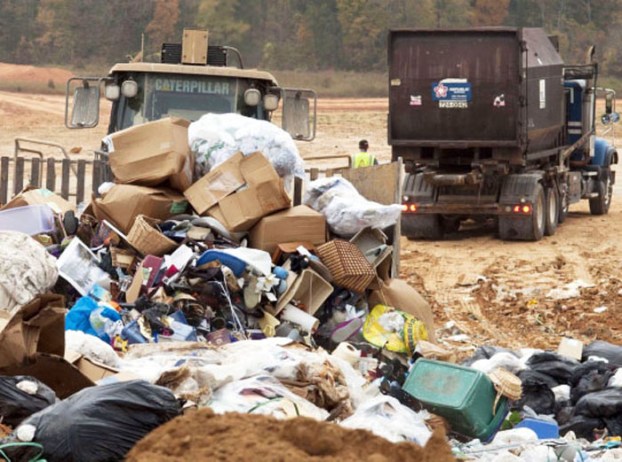 Sinclair oversees several recycling convenience sites and a processing center in East Spencer, among other things, as part of his job with county government. He said the county operates a source-separated system, meaning that folks are asked to bring material already cleaned and split into batches of acceptable items. An alternative would be single-stream recycling.

That system has been beneficial as China stopped accepting plastic and paper scrap and upended recycling for many local governments.

“We’ve been very fortunate because our material is truly homogenous and still marketable,” Sinclair said.

That’s not to say recyclers get it right every time. Sinclair said county staff pull out unacceptable items. And the county also has needed to “tighten up” and be more stringent about ensuring it is accepting only No. 1 plastics such as water and soda bottles and No. 2 plastics such as milk jugs.

“The mission is just to keep the material flowing, even in this very difficult market,” he said.

After plastic is sorted by Rowan County employees and provided to a recycling processor, it usually ends up being turned into a fiber, Sinclair said.

The U.S. recycling market had come to rely on China for exporting America’s recyclables. As China shipped goods to the United States on ships, it was relatively cheap to send recyclable scrap back to China on the same vessels. The material was then used to make other goods.

China had previously accepted material that was contaminated, but that changed with the announcement of the so-called Operation National Sword in 2017 and its implementation last year.

“China in the past has accepted bales of material that weren’t homogenous — cardboard might have lots of plastic film,” Sinclair said.

And in the U.S., “we haven’t built infrastructure that’s enough to handle all of the material that we generate,” Sinclair said.

While county government is not responsible for collecting recyclable scrap across Rowan — the city of Salisbury, for example, contracts with Waste Management for curbside pickup — it recycled 54.5 tons of acceptable plastics in 2018. That’s in addition to about 38.41 tons of TVs, 21.2 tons of other electronics and the many other items that Rowan County government accepts (a full list is available at rowancountync.gov/533/Recycling).

Sinclair said glass is readily recyclable but is often excluded from acceptable materials lists because facilities have a difficult time processing glass when it is co-mingled with other materials. Rowan County accepts glass at its sites because patrons are asked to separate materials first.

Those totals represent items brought to one of the many county recycling sites. A convenient one to many Salisburians is at 1455 Julian Road, next to the animal shelter.

So, what advice does Sinclair have for those interested in recycling in Rowan County?

“I would encourage citizens from the rural county and from our incorporated municipalities to continue to be in tune with your local recycling provider and to place items in your collection bins that are acceptable for your individual program,” Sinclair said. “In addition, it is important that we carefully consider our purchasing decisions and remember that the packaging of the item and the item itself will have an impact on our environment no matter if the item is recyclable or destined for the landfill.”

Consider the number of items you purchase at grocery stores that are packaged in plastic and then put in plastic bags, too. Because too many of us (I’m guilty at times, too) simply place those containers and bags in trash cans with biodegradable waste like food.

Sinclair said Rowan County is positioned to continue to offer comprehensive recycling options for residents and to divert as much material as possible from landfill facilities.

We should all take advantage of that resource, whether it’s through curbside recycling or making occasional trips to a recycling site. The alternative is that plastics and other items that are not biodegradable end up in our landfills.

By Gary C. Rhodes As a grade-school boy in the mid-1950s, I was introduced to the War Between the States... read more