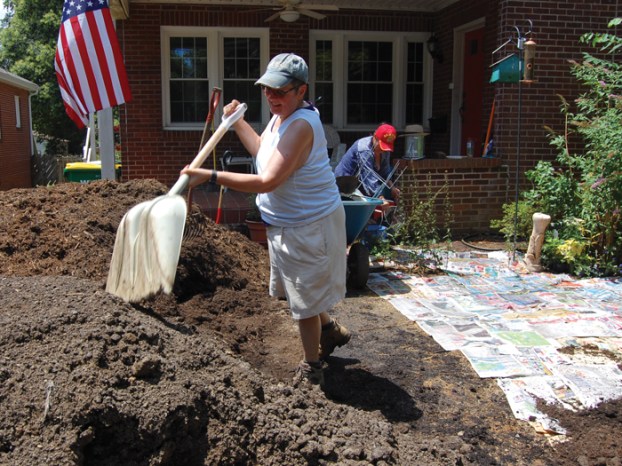 Andie Foley / Salisbury Post - Commissioner Judy Klusman, along with her friend Brendamarie Cantu, work to spread compost across a fresh layer of wet newsprint in the commissioner's "lasagna" garden.

For Commissioner Klusman, a love of trees is personal

SALISBURY — As the Rowan County Board of Commissioners looks toward creating an agricultural center at West End Plaza, Commissioner Judy Klusman is advocating for trees.

Trees, she said, would be a central part of traffic-directing green spaces at the site, the potential home of offices for the county’s Cooperative Extension, soil and water conservation, Forestry Service and Farm Service Agency. Klusman’s eyes are on big and long-lasting trees such as pecan or oak — “something that will last forever,” she said.

For Klusman, this advocacy comes naturally. She pointed to research about trees and a reduction in carbon emissions and of Rowan County’s proximity to Charlotte urban center.

And then there’s her own passion for trees and gardening. Her words in support of Rowan’s largest and longest-lasting plants were said Tuesday morning as she and housemate Brendamarie Cantu spread layers of damp newsprint across the lawn of their home on Maupin Avenue.

The process was part one in a gardening technique called lasagna gardening, a style Klusman discovered and adopted 10 years ago.

“It’s all about layering,” she said, surveying the new layer of paper spread over an area that, days before, had been barren.

The newspapers are then sprinkled with bonemeal and covered by two inches of compost and two inches of mulch before the layering begins again.

According to Klusman, the benefit is multifold. The newspaper smothers weeds and attracts earthworms, she said, which in turn help to aerate North Carolina’s compact mix of soil and clay.

This prevents the earth from retaining too much water, something that can lead to root rot and other plant-killing diseases, Klusman said.

Klusman said she’d seen similar problems with soil and clay during her time farming in Wisconsin. She was well aware of the battle ahead when it came to landscaping her Maupin Avenue home.

The landscaping is an ongoing effort for the commissioner.

Klusman’s focus is instead on larger, more eye-catching plants, including bugleweed, rosebushes, butterfly bushes, and those treasured oaks and pecans.

“Significant trees,” she calls them, once more circling back to her Rowan County’s air quality and research about the impact of trees on carbon emissions. She spoke of years past when pollution monitors measured the local impacts of exhaust and carbon emissions, the results affecting public school students’ test scores.

The best way to combat this, she said, is sturdy, long-lasting trees.

“When you look at a pecan or an oak, their roots are in the ground and spanning. They’re not heaving up sidewalks or pavement, which can get expensive over time,” Klusman said. “If we made an effort to plant trees, significant trees, each one would go a long way in helping reduce pollutants.”