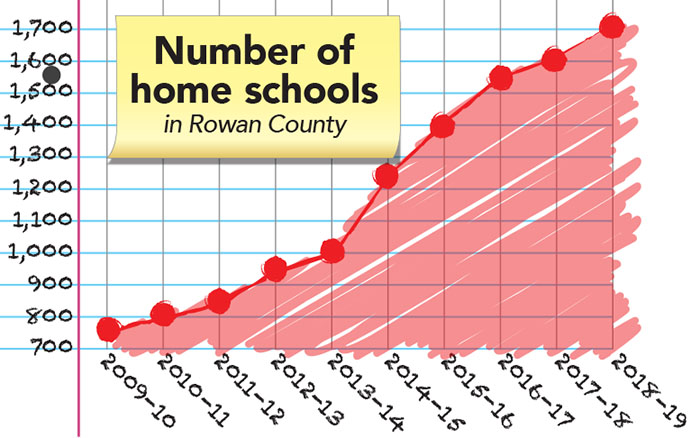 SALISBURY — With the new academic year looming ever closer, a group of parents gathered in a conference room of the Rowan County Public Library last week with a single, unifying purpose.

At one corner, a mother in plain dress welcomed attendees while her older children excitedly socialized behind her. Nearby, a couple sat in shorts, tank tops and sandals, their ensembles offset by tattoos, piercings and vibrantly dyed hair. And as their tiny daughter toddled off to greet new faces, the pair joined a diverse room in exchanging information.

Young and old, black and white, new parents and old hands, the group had gathered to explore homeschooling, an ever-growing pursuit in Rowan County and North Carolina at large. In 10 years, Rowan County has seen its number of registered homeschools more than double, increasing from 766 sites in the 2009-10 academic year to 1,710 in 2018-19.

Swelling numbers have come as population estimates in the county remain relatively stagnant, increasing just 1% from 2009 to 2017, the last year available through the U.S. Census Bureau’s American Community Survey. In that time, the county’s population of 5- to 19-year-olds — school-aged children — decreased 0.81%.

The loss of 813 in Rowan’s student population hardly accounts for the 10-year, 8% downtick in enrollment in Rowan-Salisbury Schools. Since 2009-10, RSS numbers have fallen from 20,235 to 18,521 according to March numbers, the most recent available on the North Carolina Department of Public Instruction website. Meanwhile, private school enrollment has increased roughly 14% in 10 years.

For many, Rowan-Salisbury’s 10-year loss of 1,714 students next to homeschooling’s increase of 1,121, could point to a festering distrust between the public education system and area parents and caregivers. But, according to local homeschooling proponent and cofounder of the Rowan County Homeschool Association Charles Nettles, growth has resulted from increasing resources more than frustration or disdain.

The appeal of homeschool

For Nettles and his wife Sarah, the journey to homeschooling their eight children began before the pair became parents. They met a homeschooling family while at church, he said, and were immediately impressed.

“Their kids were so well-behaved and so adapted to everything that it really attracted us to homeschooling,” Nettles said.

More would factor into the process later in life, once the two were wed and the parents of three: “It’s a commitment, because you’re dealing with a single-parent income typically,” he said.

Then, there were other struggles: a lack of available curricula, a desire to find other groups to participate in outside activities and field trips with and more.

Even so, motivation for the alternative school choice was enough to push them forward. As one of but a handful of homeschooling families in Rowan at the time, they began their homeschooling journey with the goal of providing a quality education that instilled their Christian values.

Now over 30 years into the experience of homeschooling, Nettles said the “information age” has greatly affected the non-public schooling experience. Where there were once only a handful of curricula, there are now thousands. And this, he said, was part of homeschooling’s greatest appeal: personalization.

“Homeschooling allows you to cater to the child’s learning style,” said Nettles. “Public schools are handicapped in that sense. When you’ve got 25 kids, you can’t customize the lesson to each child’s learning style. They’ve got to catch on to what’s the teaching style of what’s being presented.”

An abundance of choices for homeschooling parents meant they could choose programs that met each child’s unique learning style. And Nettles said, with eight kids of his own ranging in ages from 39 to 16, he’d seen a little bit of it all.

Facing research of student performance in personalized education methods as well as enrollment shifts, educators across the Rowan-Salisbury School System are adapting to meet the needs of the county’s non-public learning population.

Rowan-Salisbury Executive Director of Programs Eisa Cox said the school system last year began work on a pilot program that would work to bridge the gap between Rowan’s homeschool and public school learners.

The program allowed high school students to be dual enrolled in homeschool and their respective public school sites, allowing them to participate in Rowan-Salisbury-driven online courses or courses through the North Carolina Virtual Public School, all free of charge.

The pilot also offered chances for students to participate in courses in person on the school campus, have access to a Macbook Air, participate in extracurricular activities and clubs and more.

The exploration came as a part of the system’s status as a renewal school district, which allows system-wide, charter-like flexibilities.

“We’d always been asking ourselves ‘can we do this?’” said Cox. “Then it became a matter of ‘why don’t we do this?’”

The pilot opened the door to additional student personalization and flexibility. This year, the school will be adding more offerings to the partnership. Through new parameters outlined by the North Carolina High School Athletics Association, high school private schoolers will now be able to participate in public school sports teams.

These athletes will be required to spend a minimum of half of their school day learning through RSS-provided programming and attend at least one course in person per semester. They will also need to maintain their dual enrollment over both academic semesters.

With plans to further develop dual-enrollment opportunities at the elementary and middle school levels, school system Chief Strategy Officer Andrew Smith has eyes on even more mutual benefit in the coming years.

“I’m always really surprised at the number of people who homeschool,” he said. “Of course, every family has their own unique reason for doing it, but their taxpayer dollars are still paying for what we’re doing here, just like everyone else.”

By developing partnerships, Smith said, he hoped the school system would be able to draw in more families who may not have visited a Rowan-Salisbury school site in a number of years.

These interactions would provide chances for public educators to showcase the changes seen throughout the system over the last decade and through renewal — all providing an opportunity to change perceptions, he said.

“I’m interested to see next year’s enrollment numbers,” Smith said. “… We’re hoping over the next year see some open dialogue and get a better understanding of what it is these families want and need.”

And meeting the needs of Rowan learners was at the forefront of the developing partnership, he said.

“We’re all about educating the students of Rowan County, even if they’re not in our building,” Smith said. “Really, that’s part of our moral obligation.”