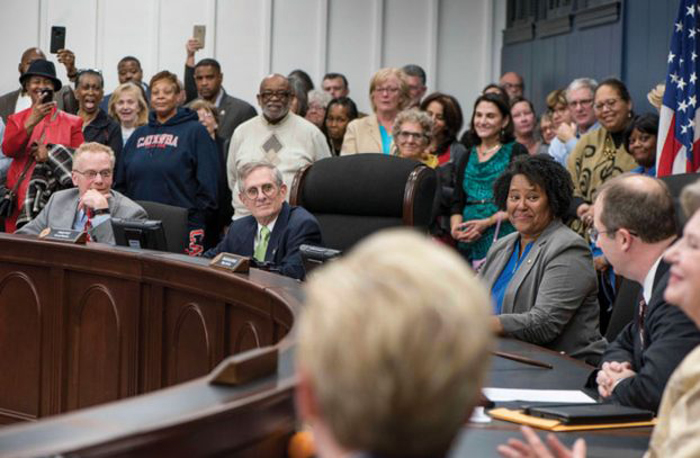 All five members of the Salisbury City Council have filed for re-election in the 2019 race. Jon C. Lakey/Salisbury Post file photo

SALISBURY — All five members of the Salisbury City Council will be on the ballot in November after Brian Miller filed for re-election Friday, rounding out the decisions by all incumbents to try to keep their seats.

The five, however, will have competition from two Planning Board members, P.J. Ricks and John Struzick; Salisbury-Rowan NAACP President Gemale Black; Giannina Monzon; and Ladale Benson.

Ahead of the filing period, the Salisbury Post asked Miller if he planned to seek re-election, and he said he was not certain. He had said at council meetings that he would not serve on the council after his current term expires.

Miller, in a letter to the Post on Friday, acknowledged that he previously said he would not seek re-election, but he said that through prayer and consideration, he decided to run to continue to grow Salisbury’s tax base and create an environment where people can live, work and invest.

“There are many voices in our community that seem to be interested in focusing on fostering division and discord,“ Miller wrote. “Personally, I would rather spend our time and energy on things that we can agree on and that bring us closer together as a community.”

Councilwoman Karen Alexander said she wants to use her skill set for the city’s good by boosting economic development, fixing infrastructure, building the relationship between the police and the public, and increasing the housing stock.

Councilwoman Tamara Sheffield will continue to focus on enhancing quality of life for all citizens, empowering community partnerships and energizing economic opportunities, her platform for when she ran for council in 2017. She said the city has made significant progress with the first two issues of her platform, but she wants to strive to attract more businesses and economic partnerships.

Rowan County Board of Elections Director Nancy Evans said the Spencer aldermen and Landis mayor races drew a lot of interest during the filing period, which closed at noon Friday.

Twelve people filed for seats on the Spencer Board of Aldermen.

“That happens when there’s a lot of controversies in municipalities,” Evans said.

The State Bureau of Investigation launched a probe of the former Landis town manager and finance officer for possible embezzlement. The SBI is expected to make its finding at the end of summer.

Spencer came into the spotlight after a recording of a phone call was leaked in April in which Alderwoman Sylvia Chillcott’s wife, Patsy, was heard calling then-Town Manager Terence Arrington a vulgar word. The local NAACP called for an investigation. Arrington later resigned, but tensions remained when Mayor Jim Gobbel got into a heated debate with Black in May.

All in all, 71 Rowan County residents filed for office in 10 municipalities, compared to 73 in 2017.

Despite slow filing in the Spencer and Granite Quarry mayoral races, candidates in each town put their names in the hat on Friday.

The Board of Elections is now preparing for the Nov. 5 municipal election. Evans said her staff will have to calculate how many ballots to order for each town or city. Judging by the interest in filing, there will be a lot of interest in voting, she said.

Evans reminded voters who recently moved to update their registration by Oct. 11 to ensure they can vote in their municipality.

The candidates who filed include: