Strasburg hits and pitches Nationals to 13-4 win over Braves 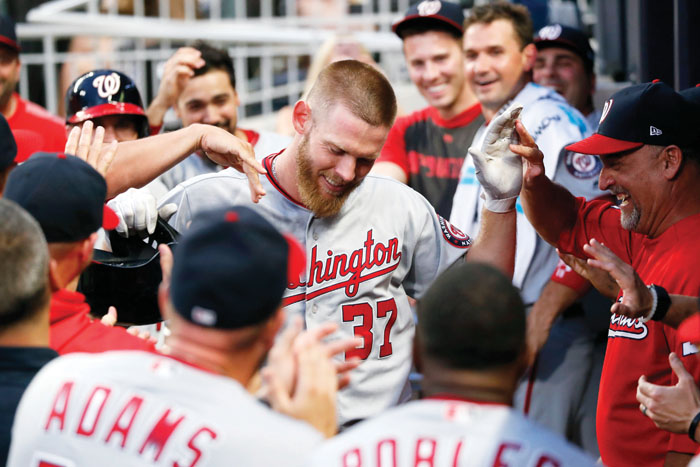 Washington Nationals starting pitcher Stephen Strasburg (37) is congratulated in the dugout after hitting a two-run home run during the third inning of the team's baseball game against the Atlanta Braves on Thursday, July 18, 2019, in Atlanta. (AP Photo/John Bazemore)

By CHARLES ODUM AP Sports Writer
ATLANTA (AP) — Washington Nationals manager Dave Martinez may have found a new pinch-hitter in his team’s latest win.
Stephen Strasburg showed he can shine in the batter’s box as well as on the mound.
Strasburg had a three-run homer among his three hits and set a franchise-record for a pitcher with five RBIs, as the surging Nationals beat the Atlanta Braves 13-4 on Thursday night.
Strasburg’s hitting made up for a so-so night on the mound, as he allowed three runs and eight hits in 5 1/3 innings.
“Stephen wasn’t as sharp as he could be but man he swung the bat really well,” Martinez said. “He might be a pinch-hitter coming up here for the rest of these games.”
Strasburg, who won the Silver Slugger Award in 2012, said he may have been a little lucky at the plate.
“It’s just how crazy this game is,” Strasburg said. “Sometimes you just run into the ball.”
Strasburg is the first Nationals pitcher to drive in five runs in a game and have two hits in one inning.
His homer was the highlight of an eight-run third inning that also included a two-run double by Victor Robles, an RBI triple by Adam Eaton and a run-scoring double by Anthony Rendon.
The Nationals, who have won 14 of their last 18 games, cut Atlanta’s lead to 5 1/2 games in the NL East by winning the opener of a four-game series. The Braves have lost three straight.
Strasburg (12-4) improved to 3-0 against Atlanta this season by winning his fifth straight start. His effort on the mound was overshadowed by his career highs in hits and RBIs.
Strasburg led off the third with a single to center. After the Nationals knocked rookie right-hander Kyle Wright (0-3) out of the game in the long inning, Strasburg hit Touki Toussaint’s second pitch 420 feet over the Washington bullpen behind the left-field wall for an 8-1 lead.
Strasburg’s big night at the plate continued when he hit a two-run single off Toussaint in the fifth.
All the time spent running the bases, including scoring from first on Eaton’s triple, may have drained Strasburg. He was pulled in the sixth after giving up a run-scoring triple to Ozzie Albies and Brian McCann’s RBI single.
Nick Markakis hit a line-drive homer off right-hander Kyle McGowin in the eighth. The opposite-field shot barely cleared the left-field wall.
Wright allowed seven runs and seven hits with three walks — all in the third inning — in 2 2/3 innings. Wright was recalled from Triple-A Gwinnett before the game.
“I just kind of beat myself a little bit,” Wright said. “I think it was lack of feel with the fastball.”
Rendon had three hits, including two doubles, and a walk.
TRAINER’S ROOM
Nationals: RHP Max Scherzer (mid-back strain) played catch but did not throw in the bullpen as expected and may not start on Sunday.
Braves: RHP Kevin Gausman (right shoulder tendinitis) is on track to come off the IL and start on Sunday after throwing on Thursday. “Talking to him, he feels really good where he’s at right now,” Snitker said.
DUGOUT DANCER
Strasburg celebrated the homer by dancing with his teammates in the dugout . “Stras isn’t much of a dancer,” said first baseman Ryan Zimmerman. “Maybe his wedding is the last time he danced.”
ROSTER MOVES
The Braves also reinstated outfielder Ender Inciarte from the 10-day injured list and optioned right-handers Bryse Wilson and Huascar Ynoa to Gwinnett. Inciarte, who had been out since May 15 with a lumbar strain, did not have a hit as he started in center field with Ronald Acuña Jr. moving to left field. Inciarte, a three-time Gold Glove winner, isn’t returning to a regular job. Rookie Austin Riley has taken over in left field.
“Just filling in,” said manager Brian Snitker when asked about Inciarte’s role. “I’m not going to feel like I’m forced to get him in.”
CHARLIE ON THE HILL
Utility infielder Charlie Culberson made his second pitching appearance of the season with a scoreless ninth. He also recorded a scoreless ninth against San Diego on May 2.
UP NEXT
Nationals: LHP Patrick Corbin (7-5, 3.39) will face the Braves for the first time this season on Friday night.
Braves: RHP Julio Teheran (5-6, 3.71 ERA) is 6-6 with a 4.13 ERA in 21 career starts against Washington, including 0-2 with a 6.57 ERA in 2018. Teheran had been scheduled to start on Thursday night, but the start was pushed back when Wright was recalled.
___
More AP MLB: https://apnews.com/MLB and https://twitter.com/AP_Sports