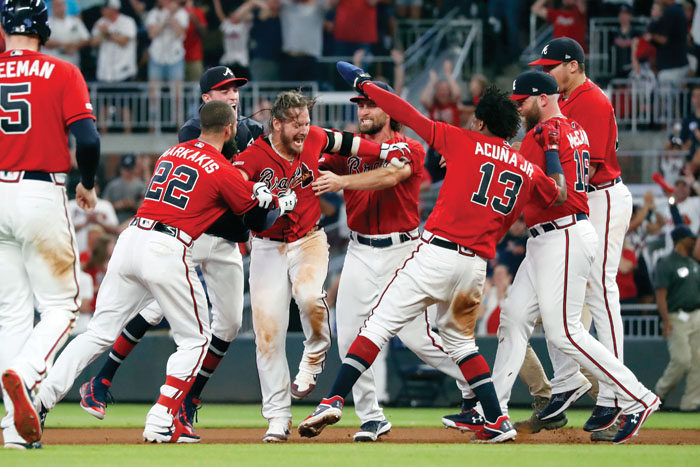 Atlanta Braves' Josh Donaldson, center, is mobbed by teammates after driving in the winning run with a base hit in the ninth inning of a baseball game against the Washington Nationals, Friday, July 19, 2019, in Atlanta. (AP Photo/John Bazemore)

By CHARLES ODUM AP Sports Writer
ATLANTA (AP) — Josh Donaldson’s bases-loaded single off Fernando Rodney in the ninth inning lifted the Atlanta Braves over the Washington Nationals 4-3 on Friday night after Luke Jackson allowed a tying, two-run homer to Victor Robles in the top half.
Ronald Acuña Jr., who had three hits, led off the bottom of the ninth with a walk off Rodney (0-3) and took second on Dansby Swanson’s single. Freddie Freeman walked on four pitches, loading the bases.
Nationals manager Dave Martinez brought in left fielder Juan Soto as a fifth infielder, including three on the left side against the right-handed hitting Donaldson.
Donaldson hit a 2-0 pitch over Robles to center-field warning track, and the Braves boosted their NL East lead to 6½ games over the second-place Nationals. Atlanta had lost its previous five home games against Washington.
Robles’ homer went 446 feet to left, giving Jackson his seventh blown save in 24 chances.
Julio Teheran gave up one hit through five scoreless innings and retired 14 consecutive hitters before pinch-hitter Gerardo Parra singled with one out in the sixth. Anthony Rendon chased Teheran with a two-out RBI single.
Nationals left-hander Patrick Corbin couldn’t win on his 30th birthday while paired with catcher Yan Gomes, who turned 32. Corbin and Gomes became only the second pitcher-catcher tandem to start together on their birthdays since 1900, according to the Elias Sports Bureau. Chicago Cubs pitcher Dave Hillman and catcher Jim Fanning did it against Pittsburgh on Sept. 14, 1957.
Corbin allowed two runs and eight hits in five innings. He struck out Ozzie Albies with the bases loaded in the first and fanned Albies to end the fifth with two out.
Albies hit a two-out double in the fourth and scored on Austin Riley’s double. Freeman was 2 for 20 in his career against Corbin before his RBI single in the fifth.
Acuña’s RBI double against Tanner Rainey gave the Braves a 3-1 lead.
TRAINER’S ROOM
Nationals: RHP Max Scherzer, on the 10-day IL since July 10 with an injury originally announced as a mid-back strain, was given a cortisone shot on Tuesday to address inflammation in the bursa sac under his right shoulder blade. Scherzer still has some discomfort and must throw a bullpen session before cleared to pitch in a game. With Scherzer unavailable, RHP Austin Voth is expected to start in Sunday night’s series finale.
Braves: RHP Patrick Weigel, who had Tommy John surgery in 2017, was recalled from Triple-A Gwinnett to make his major league debut Saturday. RHP Wes Parsons also was recalled from Gwinnett. RHPs Kyle Wright and Touki Toussaint were optioned to Gwinnett.
UP NEXT
Nationals: RHP Aníbal Sanchez (5-6, 3.71) is 1-0 with a 3.00 ERA in two starts this season against the Braves, his former team.
Braves: Rookie RHP Mike Soroka (10-1, 2.24) will try to win his sixth straight decision on Saturday night. The 21-year-old right-hander became the youngest pitcher in franchise history to be selected an All-Star.
___
More AP MLB: https://apnews.com/MLB and https://twitter.com/AP_Sports