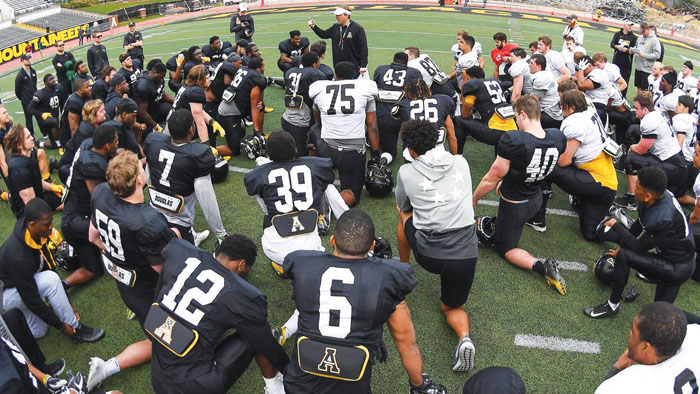 NEW ORLEANS — After securing a third straight Sun Belt Conference football title in 2018 with a victory in the league’s inaugural championship game, Appalachian State has been picked to win another Sun Belt championship in 2019.

A vote by league coaches in advance of Monday’s Sun Belt Media Day in New Orleans tabbed App State the East Division favorite and Louisiana the West Division favorite. Those two programs met for the Sun Belt title last year, with the Mountaineers claiming a 30-19 victory in Boone, and Appalachian has been picked to repeat as the championship game winner.

The 2019 championship game will be held Dec. 7 at the home venue of the division winner with the highest winning percentage in conference play.

The Mountaineers are entering their first season under the direction of head coach Eliah Drinkwitz. Only five of the 22 primary offensive and defensive starters from a record-breaking 11-2 season in 2018 are gone, and the return of nine All-Sun Belt performers from last season has added to the excitement.

App State will open the 2019 season with an Aug. 31 home game against East Tennessee State.

The Sun Belt Media Day is being held Monday in New Orleans at the Mercedes-Benz Superdome. Drinkwitz and two App State players (quarterback Zac Thomas, safety Josh Thomas) will participate in interviews throughout the day, as Monday’s media schedule begins at 9:30 a.m., with Sun Belt Commissioner Keith Gill giving his “State of the Conference” address.