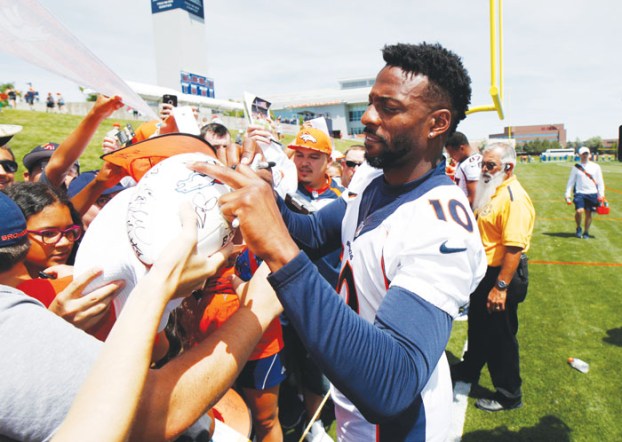 By ARNIE STAPLETON AP Pro Football Writer
ENGLEWOOD, Colo. (AP) — Emmanuel Sanders and Phillip Lindsay provided the good vibes at Vic Fangio’s first training camp practice in Denver before linebacker Todd Davis was carted off with a right lower leg injury in the closing minutes Thursday.
Davis was taken for an MRI. He was injured during a team drill with about 5 minutes left in practice and was carted off the field, although he walked into the building under his own power.
Outside linebacker Bradley Chubb said after practice that Davis is a “huge part of the defense.”
“Todd, I feel like he’s one of the most vocal leaders on this team — not just the defense,” Chubb said. “He’s one of those guys that sometimes last year in the games, I’d be like, ‘Hey, Todd, what I got right here?’ He just always knows what he’s doing. He’s always reliable. He’s always making the right calls.”
Sanders (Achilles tendon) and Lindsay (wrist surgery) returned to action for the first time since they got hurt last December.
“It’s good to see those guys out there,” said new quarterback Joe Flacco. “Those guys have so much energy. I mean, Phillip, he’s like one of my kids. I don’t know where he gets all the energy but he has it 24/7. … Emmanuel, I mean the way I’ve seen him work this whole offseason, he’s looked incredible.”
Fangio said he’ll slowly add to Sanders’ workload and that Lindsay has no limitations.
At one point, general manager John Elway huddled with Flacco, whom he acquired in a trade with Baltimore, and rookie QB Drew Lock, who signed a four-year, deal worth about $7 million on the eve of camp .
Flacco is the starter and Lock is vying to serve as his backup.
“I grew up watching John Elway,” Flacco said. “While we’re kind of colleagues now and we’re sharing the same field, there’s still a little bit of that kid in you that (thinks), ‘Man, John Elway’s standing right next to me.’ So, you try to act as normal as possible and just shoot the breeze. John’s ‘The Man’ around here. Hopefully there’s room for a couple more people.”
Notes: Although it was a blistering hot day, Fangio shrugged it off, saying, “The heat wasn’t bad. You’ve got to remember, I spent nine years in New Orleans, some time in South Carolina and Houston. They pray for a day like this.”
___
Follow Arnie Melendrez Stapleton on Twitter: http://twitter.com/arniestapleton
___
More AP NFL: https://apnews.com/tag/NFL and https://twitter.com/AP_NFL

ACC’s Coastal Division once again appears up for grabs

RCCC named school on the rise

Conversations get started on planning for diversity mural, street painting