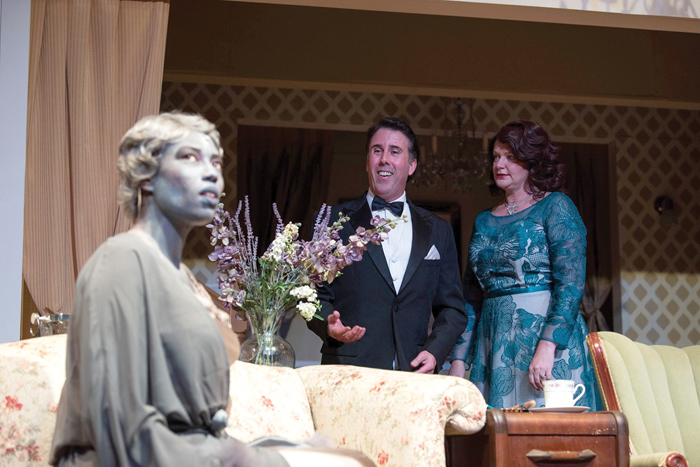 You won’t get too scared at the Lee Street theatre production of “Blithe Spirit” because you’ll be laughing a lot of the time.

This 1941 comedy, written by English playwright, composer, director, actor and singer Noel Coward, was a hit in London’s West End, playing for almost 2,000 performances. It enjoyed a revival in the 1960s and 1970s, and it is still funny today.

First-time director Chris Eller, who has been on the local stage many times, gets high marks for doing an old play well, without trying to make it something it isn’t. A lovely set and plenty of mood music add to the atmosphere.

Sonia Rosales, making her Lee Street debut, steals every scene she’s in as Madame Arcati, the psychic medium who somehow calls forth a spirit that haunts the Condomine household. Her movements, her eyes, her costume, her vocal inflections all make Rosales fun to watch.

The other person eating up the stage is Jess Johnson, who plays Elvira, Mr. Condomine’s first wife. She’s beautiful, she’s sexy, she has a lovely voice. Despite her gray appearance, she lights up her scenes, especially with wonderful laughter. Johnson was also completely believable in her role in “The Cake.”

And the current Condomines are a fascinating couple, too, with Alice Rich as Ruth and Dan Grogan as Charles. Rich has a great deal of stage experience, as does Grogan. Grogan’s comic timing, his gestures and his ability to overreact without over-acting are a treat. Instead of thinking he’s an elitist snob, which of course he is, you end up feeling a little sorry for the guy.

Rich gets to play the straight man in this funny play and often ends up as the butt of others’ jokes. But she, too, has found the right level to play the beleaguered wife.

Not to be outdone is Alyssa Whiting as nervous servant Edith. Whiting embodies the young, uneducated girl, using physical comedy much to her advantage.

Tony Moore is just as good as always in his role as Dr. Bradman. When an unfortunate makeup malfunction occurred on patrons night, he built it right into the spirit of the play, if you will. Kristen Lineberger is Mrs. Bradman, the slightly overexcited wife who wants to have an unusual experience.

The story is this — Charles Condomine, a writer, has invited Madame Arcati to his home so he can take notes on her “tricks” and gimmicks as a psychic for his next book.

Only … something happens. And without that, you would not have the rest of the play, which includes chilly breezes and unexpected manifestations.

Elvira is not quite through with Charles yet, and her frequent appearances to him are simply empty air to Ruth. The conversations Charles and Elvira have lead to many misunderstandings for Ruth, who thinks her husband has gone mad.

Tensions rise with the two wives in the same place. Charles rather enjoys the attention but not the constant bickering. He’s got to have relief, and Ruth is going to loser her mind if she can’t get rid of Elvira.

What happens next is hilarious. With good special effects, more antics from Madame Arcati and a strange connection, the ending is great fun.

On a side note, my mother, Betty Parker, played both Elvira and Ruth Condomine on the professional stage, in two different productions, including one with Polly Holliday (Flo on “Alice”) as Madame Arcati. This production brings back good memories.

The show runs two hours and 30 minutes, which is probably a little long for kids, but you will be entertained the entire time.