A big Deal: Back from D-Day trip to Normandy, Rowan WWII veteran shares his story

SALISBURY — Back in 1942, the U.S. government drafted young Rowan County farm boy Jim Deal into the Army, sent him across the country for training, then shipped him to France to fight Nazis.

Who knew that at age 96, Deal would be back in Normandy, France, sitting on a stage only a few people away from the president of the United States?

Deal never imagined it, for sure, but there he was during ceremonies marking the 75th anniversary of the D-Day invasion on June 6, 1944.

He wasn’t going to miss his chance to at least gain the president’s attention. 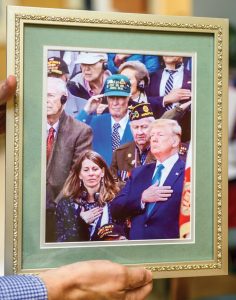 Jim Deal, in the blue jacket signifying his membership in the N.C. Veterans Hall of Fame, stands near President Trump at the D-Day commemoration. Bernadine Hernandez/Salisbury Post

After the ceremony, the crowd on stage pressing toward President Donald Trump made it difficult for Deal to shake his hand. So he settled on his lungs.

When he caught Trump’s eye, Deal shouted out, “Hello, Donald!”

Deal and the president then traded thumbs-up signs to each other.

“Well,” Deal said Wednesday, “that made my day.”

Deal spoke about his recent trip to a crowd of family, friends and daytime residents of Trinity Living Center on Wednesday. It’s just the latest stop on what’s becoming a Jim Deal Tour through Rowan County.

It’s hard to keep up with all that’s happened to Deal the last couple of months. In the spring, he was inducted into the N.C. Military Veterans Hall of Fame.

About that same time, the National World War II Museum in New Orleans — a place Deal visited a year earlier — asked him to be part of a trip to Europe culminating in the D-Day ceremony.

Deal and 17 other selected World War II veterans flew to Amsterdam, then boarded the Regent Seven Seas Navigator for a 10-day cruise.

“That was some airplane ride for me — a country boy,” Deal said.

Deal and his granddaughter escort, 30-year-old Jordan Waller, packed in all the things they could manage. They traveled the canals of Amsterdam by boat. They saw the windmills of the Netherlands.

They visited Belgium and the coastal cities of France. They toured Omaha Beach, one of the crucial D-Day invasion points. They had sumptuous food, and Deal said he walked so much on cobblestone streets one day that his feet forced him to take a rest the next.

“Everybody there, everywhere we went, people treated us so nice,” Deal told his Trinity Living Center audience.

Deal forged a close friendship with one of his travel partners, Harold Frank of Mocksville, who was part of the third wave landing at Utah Beach in 1944.

After catching a bullet in the shoulder in July 1944, Frank, who grew up in Tyro, became a German prisoner of war for about 10 months, losing 100 pounds over that time.

Deal also became friends on the cruise trip with the president of the National World War II Museum. Three days after Deal made it home to Rowan County, the museum president called him just to see how he was doing.

Several packages also have come from the museum president with things such as hats and shirts.

“I’ve been treated like a king, I’ll tell you,” Deal said.

Once he was home, Deal was asked to receive the city of Salisbury’s proclamation noting D-Day’s 75th anniversary. Also in mid-June, he attended the 72nd annual reunion of his 737th Tank Battalion — known as “Patton’s Spearheaders.”

When August rolls around, Deal is supposed to give similar presentations to a local Civitan Club, an American Legion post and a senior group at his church.

Trinity Living Center proclaimed Wednesday as Jim Deal Day. One of his daughters, Paula Hill, worked at the center for 15 years, and she has been a loyal volunteer for the past four years.

“I really love this place very much,” Hill said. “I just can’t stay away.”

Another of Deal’s daughters, Melissa Waller, operated a laptop and shared photographs from Deal’s trip on a big screen as he spoke Wednesday.

Deal grew up in Woodleaf and has spent most of his life in the Faith area. He was the youngest of 12 children.

When he was drafted for World War II, he didn’t know it then, but Deal would be among a large group of young men from North Carolina, Georgia and Alabama slated to make up the 737th Tank Battalion.

“They already had a place for us,” he said.

Those draftees rode a train to Fort Lewis, Washington, where they trained for a year. Deal described the maneuvers in an Oregon desert and the firing range practice on the base.

They eventually took a troop train to Boston before almost immediately shipping off for England.

Deal’s transport ship had engine problems, and the rest of the convoy had to leave it behind for a while. This was a dicey situation, Deal explained, because the waters of the Atlantic were filled with German submarines.

But Deal and his battalion made it to England three months before D-Day. They arrived long before their tanks did.

“England was absolutely covered up with tanks and other things, getting ready for D-Day,” Deal said.

Deal’s battalion landed on a Normandy beach six days after June 6, 1944, but Deal remembers how the invasion looked from England. “The sky was almost black with our B-17 bombers,” he said. “Now that was a sight to see.”

Deal said he and his fellow soldiers were praying the initial invasion would soften things up for them when the battalion landed with its tanks, “but that didn’t pan out, either.”

“I just thank the Lord I was in that tank.”

Deal went on to fight in two major battles, including the Battle of the Bulge. He accompanied his battalion through Northern France and into the Rhineland and Central Europe.

His personal campaign ended up in Czechoslovakia. When he and a fellow gunner dismounted their tank, Deal stepped on the trip wire to a mine.

Shrapnel cut through both of his thighs, and the injured Deal was sent to a hospital in England.

His doctors later decided he should be shipped back to the United States instead of returning to his tank battalion. While he was on the ship home, it received word the war in Europe had ended.

The ship had been traveling at night in a blackout. The news of victory in Europe brought the lights up, and it was only then that Deal and his shipmates saw the other vessels around them — all celebrating.

“We were in a pretty good convoy,” Deal said.

Back in the States, the Army sent Deal to Florida to convalesce further. Soon, he had accumulated enough service points, and he was discharged from the Army after returning to North Carolina.

Deal went to work for Southern Railroad for 30-plus years. He always smiles when noting he has been retired longer than he worked.

When Deal was inducted into the Hall of Fame earlier this year, he said then he was on cloud nine.

T.R. takes a ride: For Betsy Rich, he’s bigger than the average bear

SALISBURY — With the convertible top down Tuesday afternoon, Richard Paschall drove through the middle of Salisbury while passing motorists... read more