Yelich homers, Brewers hang on for win over Braves 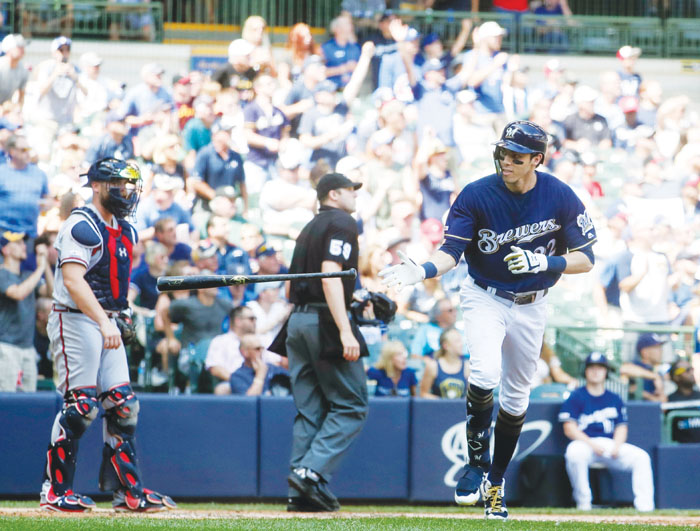 MILWAUKEE (AP) — After Christian Yelich helped give the Milwaukee Brewers a big early lead, Josh Hader preserved the win that nearly got away.

Hader struck out Ozzie Albies with two outs and the tying run on third in the ninth inning to save the 5-4 win over the Atlanta Braves on Wednesday.

“They put a nice comeback on him, had some good at-bats against him, but he finished it,” manager Craig Counsell said of Hader.

Yelich’s solo homer in the sixth inning was his 34th and tied the Dodgers’ Cody Bellinger for the major league lead. It was Yelich’s third home run in four games.

Pinch-hitters Charlie Culberson and Johan Camargo led off the ninth with singles. With two outs, Freddie Freeman struck out on a pitch in the dirt, but reached first base after the ball got away from Manny Pina and Pina committed an error with his throw to first.

Donaldson hit a two-run single to make it 5-4 before Hader struck out Albies and earned his 21st save.

The Brewers jumped out to an early lead on Piña’s two-run homer in the second inning. Yelich made it 3-0 in the sixth before Keston Hiura and Piña added RBI hits later in the inning to make it 5-0.

Milwaukee starter Chase Anderson (5-2) gave up only one hit, a double to Brian McCann in the second inning, in 5 2/3 innings. He walked three and struck out three.

“He’s a decent player,” Anderson said of Yelich, joking. “When he goes into slumps, his slumps are hitting singles instead of homers or triples or doubles. So, to have a guy that’s on your team to impact the game on a daily basis the way he does, it’s huge.”

Dallas Keuchel allowed five runs, four earned, in 5 2/3 innings. After giving up the home run to Piña, Keuchel (3-3) retired 11 of the next 13 batters. But the Brewers got to him in the sixth, pushing the lead to 5-0 before he was pulled.

“I was kind of teetering on the edge there for a while and was fortunate to get to the sixth,” Keuchel said. “I felt like I didn’t have too good of command of my fastball. I was behind on a lot of guys after the third and just couldn’t corral it together there in the sixth. I just kind of ran out of gas and turned a close game into an extended vacation.”

GETTING ON, STEALING BASE

Atlanta’s Ronald Acuña Jr. reached base on a walk in the third inning, extending his career-best on-base streak to 23 consecutive games, the longest current streak in the majors. He then stole his 17th base of the season, after a review overturned an out call, exceeding his total of 16 in 2018.

Counsell joked that Gonzalez, who had had some travel problems, will double as the team’s assistant traveling secretary. “In addition to starting games for us, he will take on George Costanza’s role,” Counsell said.

Hiura, the Brewers rookie, batted 8-for-11 in the series, including hitting two doubles on Wednesday.

The Padres, who played their first game in 1969, are the only major league team never to have thrown a no-hitter.

After Starlin Castro homered leading off the eighth, Paddack (6-4) retired the next two batters and then departed. He struck out eight, walked one, threw 94 pitches and lowered his ERA to 2.70.

Paddack retired the first 15 batters before Cesar Puello reached on a throwing error by shortstop Fernando Tatis Jr. Pinch hitter Yadiel Rivera walked with two out in the sixth and was the only other baserunner against Paddack.

Kirby Yates pitched around back-to-back throwing errors to start the ninth for his 31st save. Castro’s two-out RBI single made it 3-2 before Yates struck out Curtis Granderson with two on for the win.

OAKLAND, Calif. (AP) — Homer Bailey shook off a rocky start to go six innings in his Oakland debut and Mark Canha and Jurickson Profar each homered twice in a win over Seattle.

Oakland has won six straight and 12 of 14. The A’s have homered in a season-high 17 consecutive games.

DENVER (AP) — Donovan Solano had four hits, including a tie-breaking home run leading off the sixth inning, and San Francisco completed a four-game series sweep in Colorado for the first time in nearly eight years.

Pablo Sandoval sparked a three-run first inning with a two-run double and Stephen Vogt also homered for the surging Giants, who have won five straight and 12 of 14. Brandon Belt had an RBI single among his three hits.

Trevor Story and Ryan McMahon homered for the Rockies, losers of four straight and 11 of their last 13.

MINNEAPOLIS (AP) — Dominic Smith put New York ahead with a pinch-hit, three-run homer in the seventh inning, and Pete Alonso added a 474-foot shot halfway up the third deck as Minnesota lost a third straight game for the first time this season.

Amed Rosario went 4 for 4 with a home run and three RBIs for the Mets, who overcame three one-run deficits, set a 2019 high for runs and matched a season best with their fourth consecutive victory.

The Mets improved to 5-0 at Target Field, where they won three games in 2013.

John Brebbia (3-3) struck out four in two perfect innings. Carlos Martínez picked up his sixth save in eight chances.

Tyler O’Neill also homered for the Cardinals, who won two of three from the Pirates.

Kris Bryant and Addison Russell homered for the only hits off Sonny Gray (5-6) as Chicago won for the fifth time in six games.

Jason Heyward drove in two insurance runs with a double as the NL Central leaders took two of three from the Reds to win just their second series since sweeping St. Louis on June 7-9.

Darvish (3-4) also won for the first time anywhere since April 27 at Arizona as he struck out seven, walked none and hit two batters. The right-hander had 12 no-decisions and a loss in his previous 13 starts.

Craig Kimbrel pitched a perfect ninth for his fourth save in five chances.