T.R. takes a ride: For Betsy Rich, he’s bigger than the average bear 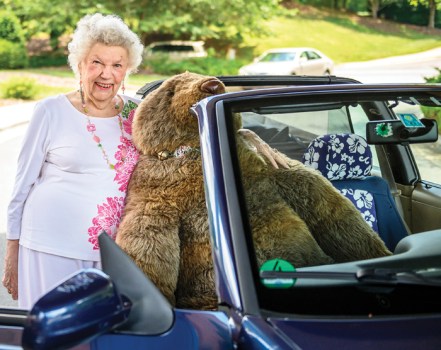 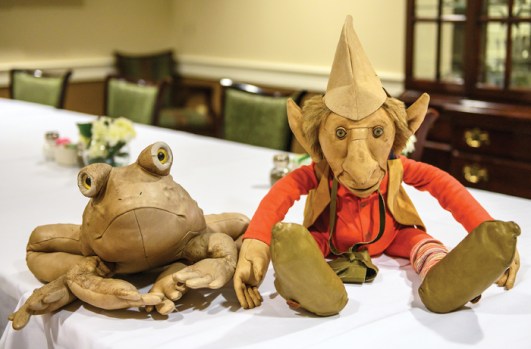 Tom the Toad and Tom Griswold are two toys made by Charleen Kinser Designs. Bernadette Hernandez/SalisburyPost 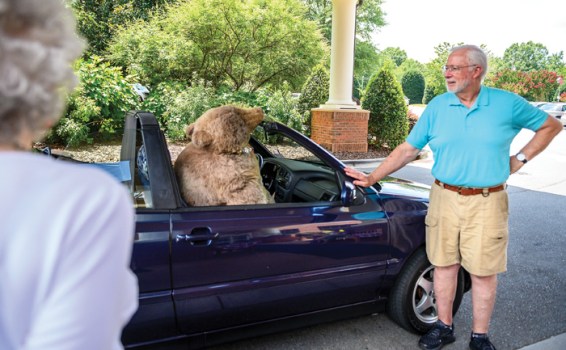 Richard Paschall gets ready to take T.R. for a ride. Bernadette Hernandez/SalisburyPost

SALISBURY — With the convertible top down Tuesday afternoon, Richard Paschall drove through the middle of Salisbury while passing motorists and pedestrians looked twice and three times toward his car.

In the front passenger seat, a stuffed Teddy Roosevelt bear — T.R., for short — seemed to be enjoying the ride.

This wasn’t just any teddy bear. His size and girth alone were noteworthy. The seat belt wasn’t long enough to wrap around him. And his snout pointed up over the visor as though he were breathing in the fresh air.

Richard actually was doing a favor for his Trinity Oaks friend Betsy Rich, who just thought her treasured T.R. deserved a nice outing.

“He looks as though he owns the car,” Betsy said Tuesday before Richard and T.R. took off. “Get him an ice cream cone.”

There wasn’t room in the 1999 Volkswagen Cabrio for anyone else.

You wouldn’t know it, but there’s quite a story attached to T.R. It reaches back about 35 years and involves dear friends; Halloween; a gnome; a toad; Betsy’s former students; and a talented artisan/designer in Boalsburg, Pennsylvania.

But start with a dinner held last Thursday at the Trinity Oaks retirement community.

Folks who live independently in the Trinity Oaks cottages get together every two months for a themed dinner in the special-events room, located upstairs at the main building.

Richard and Pat Paschall headed the planning behind this most recent dinner, which carried the theme “Teddy Bear Picnic.” Last Wednesday, by the way, was International Teddy Bear Picnic Day.

Pat did most of the work in preparing for the dinner, which ended up with nine tables and 54 people. The Paschalls put out a call for diners to provide or bring along any teddy bears they had.

“I was flabbergasted,” Richard said of the response.

Even though most of the cottage dwellers have downsized from much larger homes, many of them refused to leave behind their teddy bears.

They provided enough teddy bears to allow for centerpieces at each table, not to mention maybe 25 more that surrounded the biggest bear of all, T.R., who sat in a rocking chair on stage.

“And he looked wonderful,” Betsy said. “He looked happy.”

Normally T.R. sits in a fairly prominent space in Betsy’s living room, where she might decorate him for Christmas or other occasions.

After a great dinner of barbecue chicken and pork with four different sauces, seasonal vegetables, dessert and coffee, Richard grabbed a microphone and asked if anyone wanted to share a story about his or her teddy bear.

“Everyone did,” Richard said. “Who knew?”

The microphone eventually reached Betsy, who recounted how she and her great friend and assistant, Jo Shaw, were teaching a Title I class in the mid-1980s at Henderson Elementary School.

“I wanted to have something for the kids to do at Halloween,” Betsy said, and she and Jo settled on the idea of having their fourth-grade students write stories inspired by two soft-sculpture figures Jo had at home — a gnome named Tom Griswold and a toad called Tom.

With the Toms in full view, Betsy gave the kids a prompt: “It was a dark and stormy night in the forest when the gnome and the toad met … ”

The two best stories the women received back that day were from girls who arguably faced the toughest challenges in school. “We were thrilled,” Betsy said.

The stories were so good that Jo sent them with an explanation to Charleen Kinser, the master designer whose shop in Boalsburg had crafted the pig leather gnome and toad.

From 1977 to 2001, Charleen Kinser Designs  was made up of Kinser and a small group of artisans who hand-produced limited editions of various soft-sculpture creations.

Kinser was so impressed with the inspiration her shop had provided for the Salisbury students, she used their stories as part of her advertising materials.

Betsy and Jo loved it.

Seven or eight months passed, and one day an intercom message came to Betsy’s trailer that she should report to the school office because two “barrels,” addressed to her, were blocking the hallway.

One of the crates was quite high, and it contained Kinser’s Teddy Roosevelt bear. The creature was so big, “I couldn’t get it down to the trailer,” Betsy said.

The other package included a toad of her own and three rabbit toys. All the items were from an appreciative Kinser.

Betsy marveled — and still does — at the details that went into making T.R. The pads and toes of his feet are leather, as is his nose. His furry coat looks as though it came from a real bear.

His eyes seem to look back at you.

“We’ve had such fun with that bear over the years,” Betsy said, adding how much T.R. enthralled her students whenever she brought him to the classroom.

An aside to T.R.’s story: The late Larry Shaw, Jo’s husband, became a good customer of Kinser’s and sold many of her creations from his Lyon-Shaw office in Salisbury.

After Richard heard Betsy’s story, he said, “We ought to drive this bear around Salisbury.”

So that’s what he did Tuesday. Here’s hoping T.R.’s ice cream was a bear-y flavor.