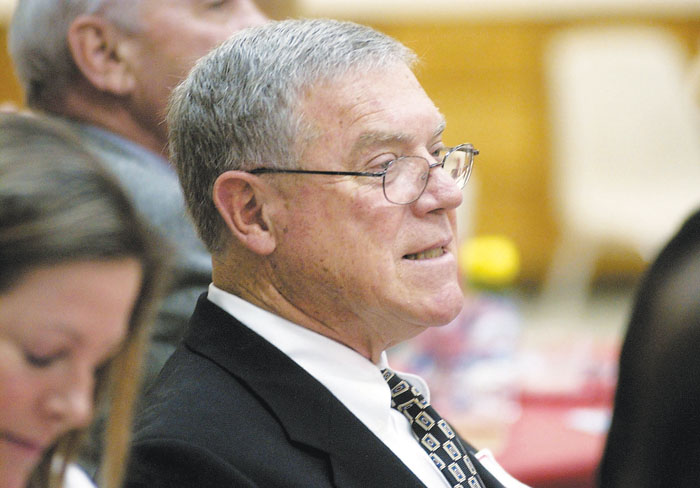 JON LAKEY FILE PHOTO/SALISBURY POST ... Ken Owen, at his induction in the Salisbury-Rowan Sports Hall of Fame, on May 1, 2004. Owen, a standout football player at Boyden High School and Georgia Tech in the 1950s, died last Friday at 84.

SALISBURY — Samuel Kenneth “Ken” Owen scored a remarkable touchdown in his final Boyden High game for legendary coach Bill Ludwig, and he went on to score touchdowns in the 1952 Shrine Bowl and 1956 Gator Bowl.

Born in 1935,  Owen passed away at 84 on Friday, July 12, at his Salisbury residence. He was a successful businessman known for Owen and Leonard Heating and Air and Owen Drug Company. He also tried his hand at politics. In the 1970s, he was twice elected to serve in the North Carolina House of Representatives.

Before those endeavors, he was quite a football player, one of the greatest of his era.

In Owen’s senior season at Boyden in the fall of 1952, the fullback was the state’s leading scorer. A 190-pound battering ram with speed, he crunched for 25 touchdowns out of Ludwig’s single-wing offense. That was an era of two-way performers, and Owen also played linebacker. He accounted for a safety on defense, which boosted his scoring total to 152 points.

In a 28-24 win against Asheville, Owen scored all four Boyden touchdowns.

In 1952, Boyden came close to its first conference championship since 1933. Boyden lost a mid-season game to Charlotte Central, but if it had been able to beat R.J. Reynolds on the final Friday of the regular season, it would have shared the league title and gotten a rematch with Charlotte Central in the playoffs.

That fateful game with R.J. Reynolds was played at Bowman-Gray Stadium. Owen made one of his most electrifying runs that night, 60 yards for a touchdown, and Boyden held a  precarious 14-12 lead in the fourth quarter. Owen led a goal-line defensive stand late in the contest, but the Demons kicked a field goal with 58 seconds left to pull out a 15-14 victory.

Owen also nearly led North Carolina to victory in that year’s Shrine Bowl, playing both ways in front of a crowd of nearly 20,000 at Charlotte’s Memorial Stadium.

He recovered a fumble on defense and broke a 46-yard scoring run in the third quarter that gave the Tar Heels, who were quarterbacked by Sonny Jurgensen, a seemingly secure 19-3 lead. Owen was actually announced as the game MVP, but South Carolina staged a startling comeback, scored three touchdowns in a hurry, and won 23-19.

Administrators hastily switched the MVP award to South Carolina’s Charles Carter, who led the comeback by the Sandlappers, but they did hold a ceremony in Charlotte the following week, with WBTV presenting Owen with a special “Most Outstanding North Carolina Player” trophy.

In the months that followed the Shrine Bowl, Owen received every accolade imaginable. He was conference MVP. He was All-State.

He became the third Boyden player named to the All-Southern team. That honor covered 12 states and was announced by the Orlando Sentinel. Only five North Carolina players made All-Southern.

Next Owen became an All-American. The Wigwam Wisemen, based in Oklahoma City, chose the official high school All-America team from 1947 until the early 1960s and had their teams published in The Sporting News. The Wisemen formulated their teams from nominations sent in by more than 1,000 newspapers, radio stations and television stations.

Boyden back Jerry Barger had been named an honorable mention All-American by the Wisemen, but Owen was held in even higher regard.  He was named to the All-America second team.

Recruiting was far less publicized then, and it was assumed Owen would follow Barger to Duke, but shortly after he played in the East-West All-Star Game in Greensboro, Owen headed instead to Georgia Tech, the undefeated national champions in 1952, to play for coach Bobby Dodd.

In those days, Tech competed in the Southeastern Conference, so that meant taking on programs such as Florida, Alabama, Georgia, Auburn, LSU and Tennessee.

Owen embraced that challenge and made an impact for the Yellow Jackets, especially in the 1955 and 1956 seasons.

When Georgia Tech beat Florida in Gainesville early in the 1955 season, Owen was awarded the game ball for his relentless rushing efforts.

That was a tremendous era for Georgia Tech under Dodd’s leadership. Owen played on teams that won the 1954 Sugar Bowl against West Virginia, the 1955 Cotton Bowl against Arkansas and the 1956 Gator Bowl against Pittsburgh. In that Gator Bowl played on Dec. 29, 1956, in Jacksonville, Owen scored the game’s first touchdown on a 3-yard burst.

He was the workhorse at fullback for the Yellow Jackets in 1956, a season in which they went 10-1 and were ranked fourth in the final Associated Press poll. He led the squad with 497 rushing yards on 107 carries, averaging 4.6 yards per carry. He also handled the punting and the punt returning. He was named Georgia Tech’s outstanding back and was named to the All-Southeastern Conference team.

Owen was a late-round draft choice by the NFL’s Washington Redskins in January, 1957. The draft was 30 rounds then, with the first four rounds in November and the last 26 in January. Owen was picked in the 21st round.

He never played for the Redskins.

He got married in the summer of 1957 to Barbara Schofield, and then headed to join the Montreal Alouettes of the Canadian Rugby Union, the forerunner of today’s Canadian Football League.

He played in four games for the Alouettes, rushing 23 times for 93 yards, catching three passes and returning six kickoffs. He had a 57-yard kickoff return and he scored a touchdown on defense on a fumble recovery, but a knee injury abruptly ended his playing days in Canada.

Owen was ready for a comeback in 1960 when the American Football League started up. Seven cities had been selected for the initial AFL franchises, including Denver, and Owen had received a contract offer from the Broncos. Owen’s hope was that Atlanta would become the eighth AFL franchise, as he dreamed of returning to the site of his glory days with Georgia Tech, but the AFL’s eighth team turned out to be the Oakland Raiders.

So Owen signed his contract and reported to the Broncos’ training camp in July, 1960.

There were close to 100 prospective players in that camp. Owen survived the cuts right up until the last exhibition game, but another injury setback occurred.

That was his last fling with pro football, but he was welcomed back to Salisbury and found success off the field for many decades. Even after he retired, he worked for many years with youngsters at Erwin Middle School.

Long after his playing career, Owen received impressive honors from Georgia Tech. He was not forgotten.

He was named as the all-time fullback for the Bobby Dodd Era at Georgia Tech, the seasons from 1945-1966.

In 1979, he was inducted into the Georgia Tech Sports Hall of Fame.

In 2004, he was elected to the Salisbury-Rowan Sports Hall of Fame.

Owen is survived by his wife, three daughters and a grandson. A service will be held today at 6 p.m. at Summersett Memorial Chapel. The family will receive friends following the service at Summersett Funeral Home.