EAST SPENCER — Shawn Rush, the third vice chairman of the Rowan County Democratic Party, is running for a seat on the East Spencer Board of Aldermen.

Rush, 48, is co-owner of DRJ Trinity Business Group LLC, a business and marketing company. He filed his candidacy on July 8. 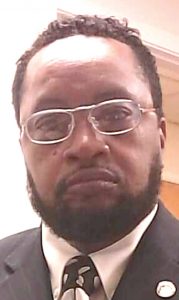 Rush is a Stanly County native who moved to Rowan County four years ago and relocated to East Spencer last year.

Rush said the reason he is running is simple: “To shine a new light on East Spencer.”

He said for years, there’s been a dark cloud over the town and in the minds of people.

“What I bring is the experience in marketing,” Rush said.

Rush said he’d like to give the town a “makeover” and help create business opportunities as well open recreation activities “for all youth, not just a targeted few.”

He hopes to be able to help bring in new businesses.

“You can only build the future with a vision and action,” he said.

Rush also hopes to see some activity at the former school administration building and to create affordable housing.

Rush is the treasurer of Great Women and Men United Inc.; an outreach organizer for Antioch Missionary Baptist Church; a volunteer at Rowan Meals on Wheels and Rowan Helping Ministries; an instructor at the East Rowan High School Design Lab youth entrepreneur program; a board member with the Tiara N. Allison Scholarship Foundation in Statesville; and chairman of Precinct 18 in East Spencer.

In addition, Rush is the assistant superintendent of Christian education at Antioch Missionary Baptist Church in Granite Quarry.

In other filings, Travis Carter is seeking to fill the unexpired term of Otis Gibson, who passed away. Current board member John Noble filed for re-election, and Barbara Mallett is running for another term as mayor.