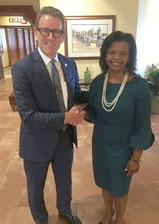 The commission examines sentencing laws and practices and makes recommendations to the General Assembly for the addition, deletion or expansion of sentencing options to achieve policy goals. The commission employs an executive director and a team of nine full-time staff members.

The commission’s 28 members are drawn from all three branches of government and all areas of the criminal justice system and from the public.

“I appreciate the work Judge Brown has done and look forward to his recommendations,” said Beasley in a letter announcing Brown’s appointment. “I’m grateful for his willingness to continue serving on this important commission and his contribution to the administration of justice.”

Before becoming chairman, he served on seven commission subcommittees, including leading the Justice Reinvestment Act Subcommittee. Additionally, he represented the commission on the Youth Accountability Task Force created by the General Assembly to design a plan to raise the age of juvenile jurisdiction.

“I’m honored to be reappointed to lead the commission, and I’m proud of the work that we’re doing together,” said Brown. “Among other areas of study, we will continue to focus on important sentencing and correctional policy issues including DWI sentencing laws, forecasting prison and jail populations, and examining offender recidivism.”

Brown is a past president of the Conference of Chief District Court Judges. He was elected to the District Court bench in Rowan County in 1998 and appointed chief judge in 2001.

He has more than 27 years of experience in the North Carolina court system, having served as a private attorney, Department of Social Services attorney and assistant district attorney in addition to chief District Dourt judge. Brown will continue his duties as a chief judge in addition to leading the sentencing commission.

Brown received his bachelor’s degree from Appalachian State University and studied law at the University of South Dakota School of Law and Wake Forest University School of Law. He lives in Salisbury with his wife, Emily Ford. They have three children.

Meals on Wheels clients will get help for pets