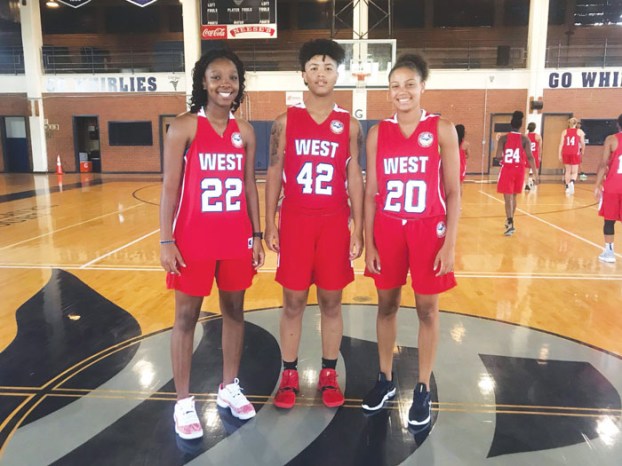 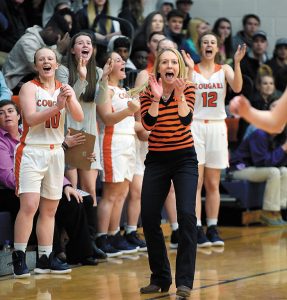 Wayne Hinshaw FILE/for the Salisbury Post …
Carson’s Brooke Stouder, during a game last season against West Rowan. Stouder was an assistant coach for the West squad in the high school all-star game in Greensboro on Monday night.

GREENSBORO — Carson girls head basketball coach Brooke Stouder spent three hectic days (Saturday through Monday) with the West All-Stars as the assistant coach, and then headed to the beach with nice memories.

“Even though we lost the game (81-78), it was a great experience getting to know players from the East as well as the West, as both teams traveled together everywhere,” Stouder said. “Three Rowan County girls playing for the West team made this something really special and memorable for me. I can’t believe that’s ever happened.”

It has happened before, but only once. In 2004, East Rowan’s Maggie Rich and Chrissy Killian and Salisbury’s Sade Jordan were 30 percent of the 10-person West squad.

The first East-West girls game was played in 1975.  East Rowan’s Cristy Earnhardt was chosen for the team that year.

It was 17 years before Rowan had another girl play in the game. That was South Rowan’s Tracy Connor in 1992. She was voted the game’s most outstanding player.

Over the years, 21 Rowan girls have played in the game — seven from Salisbury, four from East, four from West, three from South, two from North and now one from Carson.

This year’s Rowan representatives were McKenzie Gadson, the first Carson Cougar; Bryanna Troutman, the first Salisbury Hornet in the game since Olivia Rankin and Ayanna Holmes were West teammates in 2011, and South Rowan’s Janiya Downs, the first Raider chosen since Janetta Heggins appeared in the game 20 years ago.

Between them, Downs, Troutman and Gadson accounted for 5,400 high school points. All three will play in the South Atlantic Conference next season. Downs is headed to Catawba, while Troutman will play for Wingate. Gadson was recruited by Anderson.

“It was great to get to coach McKenzie one last time in the all-star game, and it was wonderful interacting with Janiya and Bryanna,” Stouder said. “I’ve always had a good relationship with them, even though they’ve been on opposing teams. We always talk when we see each other. They’re a lot of fun.”

Stouder and head coach Shane Slate (North Surry) didn’t get to coach the West team they expected to have. Of the original 10 girls picked for the squad, they ended up with only three by game night.

“Things happened,” Stouder said. “There were medical issues for a couple of the girls, and then there were college coaching changes that affected us. Several coaches wanted their girls on campus early instead of playing in an all-star game, and the wishes of college coaches have to take precedence.”

“Well, you’ve got a long list of nominations made by high school coaches, and when a girl drops out, you go to the next name on your list,” Stouder said. “We were still able to put together a strong team.”

The final roster for the West included eight players that Stouder had encountered with her Carson teams.

Sawyers had 10 points and six rebounds for the West squad and demonstrated some deep shooting range.

One of the later replacements was Troutman. At 6-foot-2, she frequently was the tallest West player on the floor and she proved vital to the West making it a competitive game. She had a team-high nine rebounds in 22 minutes and also led the West with three assists. She made a 3-pointer and had one inside bucket.

“As soon as the girls started checking in on Saturday, I saw Bryanna, and she looked different than she did in February,” Stouder said. “I could see how hard she’s been working in the weight room to get ready for college. She looked strong and in great shape. She’s tough. She did a great job for us in the game.”

Gadson only took two shots in 22 minutes, but she did what she does. Besides three points and three rebounds, she had a steal, an assist and a block during the West team’s fourth-quarter comeback that fell just short. She was one of the few West girls with zero turnovers.

While Troutman and Gadson started, Downs came off the bench and scored 12 points in 18 minutes. She added three rebounds and one assist. She drilled a 3-pointer that helped fuel the West’s rally.

Former Ledford guard Lyrik Thorne, another Catawba signee, led the West with 16 points. She’ll be an impact player for the Indians as a freshman.

After checking in on Saturday morning and posing for team photos, they found their hotel rooms. There were two practices held on Saturday, one in the afternoon and one at night.

“Saturday was a long day and everyone was tired, but the girls got up on Sunday morning and we attended services together at one of the local churches,” Stouder said.

After lunch, there was another practice on Sunday, followed by a huge banquet for all the all-stars from three sports.

On Monday, there was a shoot-around at the Coliseum. Then the game was played Monday night.

“There wasn’t a lot of time for anything but basketball, but it was all positive,” Stouder said. “I’m looking forward to seeing how all of the girls do in college.”

Stouder’s Carson program is coming off a season in which it set school records for victories (27) and defense (38 points per game allowed), took its first ever outright conference regular-season title and won its second straight Christmas tournament championship.

Stouder, a graduate of East Rowan and Pfeiffer and the only head coach Carson has ever had, was 4-67 in her first three seasons after the school opened. She is now 191-154 and is third on Rowan County’s all-time list for girls basketball coaching victories. She figures to pass former North Rowan coach Gary Atwell (198 wins) for second place around Christmas.

“It ‘s hard to replace someone like Gadson, because she meant so much to us, offensively and defensively,” Stouder said. “We’ll be small, and we’ll have to find a way to rebound, but we’ll be working to have another good team.”