Editorial: Make sprucing up Rowan’s side of Yadkin a priority 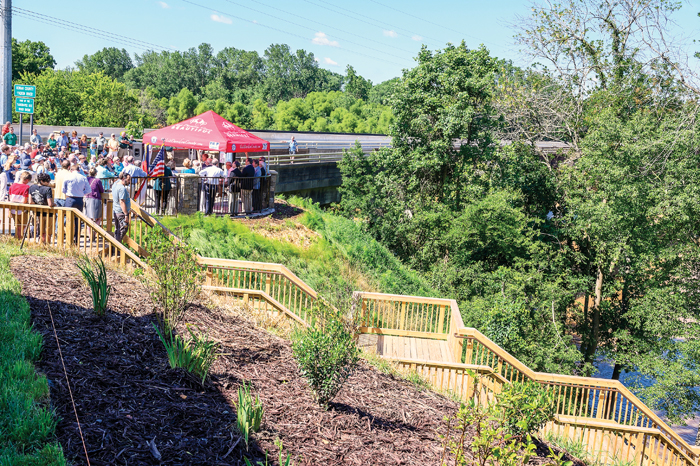 Nearly one month ago, Davidson County unveiled to a large crowd the first phase of a new park including the Wil-Cox Bridge, York Hill boat Access and Historic Site.

The site and future plans are great examples of capitalizing on the Yadkin River as a resource for recreation. There are separate walking and bike paths on the bridge, a wooden staircase leading down to the river’s edge, informational signs discussing the river’s history, covered benches facing the river, picnic shelter and a large Davidson County seal at the entrance.

It’s a nice way to spend part of a summer afternoon. That is, until reaching the end of the Wil-Cox Bridge and entering Rowan County. The walking path ends abruptly onto a patchy grass path where pedestrians are greeted by a metal tank with rust creeping down the sides. And next to that path is a large plot of land with overgrown shrubs, piles of debris and two water towers  noting the site was once the home of the North Carolina Finishing Company.

Suffice to say, a walk from one side of the river to the other is a jarring experience and there’s no clear connection from the Wil-Cox bridge’s walk and bike paths to anything else.

At a minimum, the greenway would ensure bike riders and pedestrians have a continued path from Davidson County’s park.

But we think there’s more work to do.

Rowan County should collectively work on creating an attractive gateway on its side of the river. That will require hard work by local government officials, particularly the town of Spencer, and the interest of volunteers in making the site a reflection of Rowan County’s river history.

And creating an attractive site may also require help from owners of the adjacent, vacant industrial property. A deed to the property belongs to Fennegan & Murphy LLC, which registered its primary address with the Secretary of State as being on Lyerly Road in Mt. Ulla. Though, the LLC was administratively dissolved years ago for failing to file an annual report. Two men, Donald Rand and Ken Fleming, are named managing members of the LLC.

We hope the town of Spencer and other local leaders will use the creation of Davidson County’s park as a spark to being work on sprucing up Rowan County’s side, including the greenway and a small park at the Wil-Cox bridge, too.

Rowan County has a tremendous resource in the Yadkin River and High Rock Lake, and improving its appearance will only boost the value of that resource.