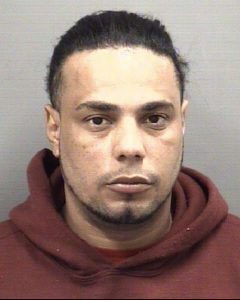 GREENSBORO — A Concord man was sentenced to more than 13 years in prison for the distribution of more than 500 grams of methamphetamine.

The sentence, handed down Tuesday in federal court in Greensboro, comes months after he pleaded guilty, according to U.S. Attorney Matthew G.T. Martin of the Middle District of North Carolina.

Judge Catherine C. Eagles sentenced Eddy Antonio Peralta, 35, to a 165-month term in prison on charges of possession with intent to distribute more than 500 grams of meth. In addition to prison, Peralta was ordered to serve five years of supervised release after completing his sentence.

In October 2017, Rowan County Sheriff’s Office deputies received information that the driver of a black truck at a garage near Blackwelder Baptist Church was in possession of methamphetamine.

Investigators found a black Nissan Frontier truck in the parking lot of the garage. An officer stopped the vehicle as it left the parking lot. The officer recognized the driver as Peralta based on previous interactions with him. The officer also knew Peralta did not have a valid driver’s license.

While the officer cited Peralta for the traffic offense, a second officer used a dog to sniff around the exterior of the Nissan.

The K-9 alerted the officers to the presence of narcotics, and a subsequent search of the vehicle turned up 80 grams of a substance suspected to be crystal meth.

Peralta admitted he had a pound of meth stored in a vehicle at his residence in Concord. Officers searched Peralta’s home and found a large quantity of meth inside a disabled gray Honda. Laboratory analysis confirmed that the substance was methamphetamine, with a total weight of 895 grams.

Before this arrest, Peralta had been convicted of felony sexual assault, felony possession of cocaine, and possession of a firearm by a felon.

STATESVILLE — A 34-year-old mother faces felony murder charges in the death of her infant son after a two-month investigation... read more