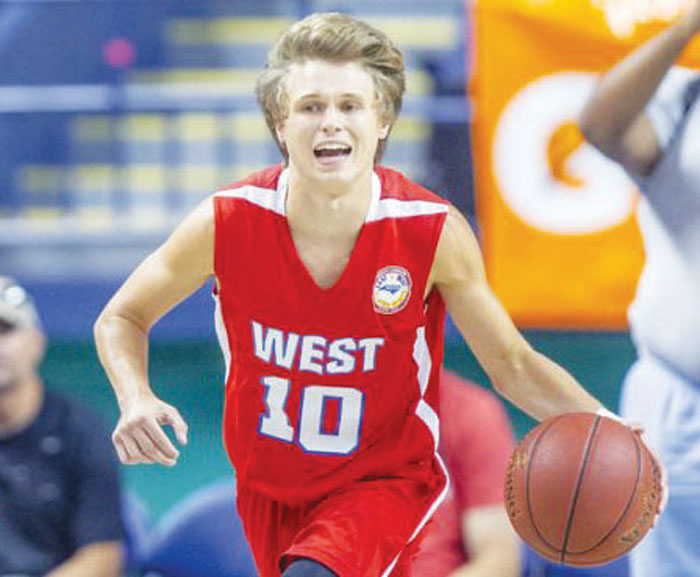 SALISBURY — Recent North Stanly graduate Bryson Childress scored 14 points in Monday night’s North Carolina East-West All-Star Game at the Greensboro Coliseum, but that was only part of the story.

Tom Childress, who played for legendary coach Sam Moir at Mt. Airy High School and at Catawba College (1960-64), participated in the East-West game in 1960. He and Mt. Airy teammate Mike Cooke, who went on to play for the Tar Heels in Chapel Hill, were both selected for the game in Greensboro, as Mt. Airy was 25-0 and 3A state champions. Mt. Airy waltzed through that season, beating Kinston in the state title game by 23 points (64-41).

Two of Tom’s sons played in the East-West game — three years apart. Brad Childress had an outstanding career at Albemarle High School and played in the all-star game  in 1986. He went on to a Hall of Fame career at Campbell University (1986-90) and was on the 1980s All-Decade team for the Big South Conference.

Paul also starred at Albemarle High, then collegiately at East Carolina (1989-92), before transferring to Pfeiffer for his senior season (playing for coach Bobby Lutz). Paul played in the 1989 East-West game.

Bryson is coming off an epic career at North Stanly, and was coached by his father there. He plans to prep at Hargrave Military Academy and will still have four years of eligibility for college basketball, beginning in 2020. He is now getting interest from a number of schools, including the Naval Academy and Princeton.

There have been plenty of two-generation families in the East-West game but it is believed that the Childress men are the only ones to span three generations. That makes Tom Childress, who coached basketball at Pfeiffer for 20 years before going on to distinguished administrative careers at both Pfeiffer and Catawba, proud beyond words.

“It’s pretty neat,” said the elder Childress, who resides in Salisbury. “A proud moment, as we had a lot of family members there, in addition to friends and coaches.”

Tom explained that when he and high school teammate Cooke played in the all-star game, it was first time it was held in the Greensboro Coliseum. Cooke joined him at this year’s game to watch Tom’s grandson.

“Mike Cooke and I made it together and I believe it was the first time, since the game started in 1949, that two boys from the same school were selected, so we’re proud of that, too,” said Tom. “And Mike was there (Monday night) and sat with me, to watch Bryson.  It sort of hit me, right before the game started, that things have come full circle. So, it was a special night.”

Speaking like a former basketball coach, instead of a grandfather, Tom Childress explained that Bryson has a Division I dream and possibly the game to reach that goal.

“He’s very quick and can go by people, and he can shoot the 3-pointer,” said Tom. “And he gets his shots off so quickly. So, Hargrave will be a good experience for Bryson and when practice begins this fall, there will be 30 to 40 college coaches watching practice, so he’s chasing that dream.

“Because of the 2020 grad year, a lot more schools are now interested in Bryson,” continued Tom. “It’s the timing of it. At Hargrave, he will compete in practice and in games against some really good players. They play a premiere schedule.”

Hargrave is coached by former Catawba star Lee Martin and one of the assistants is Ben Veshi, another former Indians player.

“Bryson ranks 10th in his class at North Stanly, so academically, he’s fine,” added Tom Childress. “He had some D2 and D3 offers, but he wants something bigger. Hargrave will help him reach that goal, I believe.”

Bryson led North Stanly into the state 1A playoffs, falling to eventual state champion Bishop McGuiness. He finished the season with a stress fracture in one his feet.  Bryson had a cast on for six weeks and got ready for the East-West game in about two weeks. Still, he still showed the abilities that backed up the scoring, assists and steals numbers he compiled with the Comets.

“I’m really honored and blessed to carry on a legacy like that, to be a third-generation player,” Bryson Childress told the Stanly News & Press. “I’ve had a great family that has helped me work hard to earn myself a spot just like my father, uncle and grandfather did. It really meant a lot to me that I could make my family proud, playing in this event

“It was really a neat experience being a part of the group of guys we had,” continued Bryson. “You’re surrounded by guys that are all going to play college ball like myself that you can really relate to … with the recruiting process and travel basketball.”

NOTES: Tom Childress added that in 1961, the year after he and Coach Moir landed in Salisbury at Catawba, Mt. Airy again went 25-0 and won the 3A state title. Charlie Moir, Sam’s brother, had taken over and won it that year and the state championship again in 1963, before moving on to a long career at Virginia Tech. In all, Mt. Airy won three state titles in four years.

“Coach Moir used to joke that if he knew those returning players were going to be that good, he would have stayed at Mt. Airy,” chuckled Childress. “That would have changed history a bit, right? But Cooke had been the best player in the state our senior year and we nine players off of our team eventually play college basketball, so Coach Moir never dreamed the ’61 team would also go 25-0.”