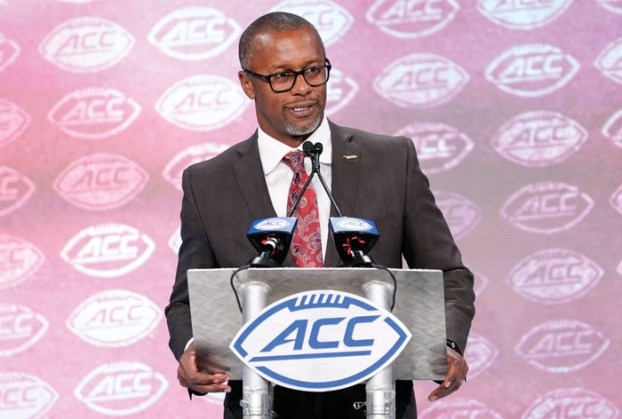 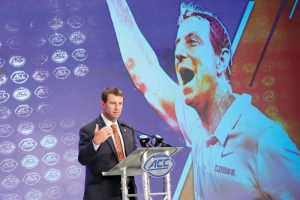 CHARLOTTE (AP) — No one has to tell Willie Taggart that he faces pressure to fix turn things around at Florida State after the Seminoles failed to reach a bowl game for the first time since 1981.

It was an inauspicious beginning for Taggart.

In his first year as the head coach, the Seminoles finished with a 5-7 record. The season included a humbling home loss to eventual national champion Clemson along with lopsided margins in losses to Virginia Tech, Syracuse, North Carolina State, Notre Dame and Florida. But Taggart said his perception of the program remains the same, even after last year’s stumble.

“I expect Florida State to win and that hadn’t changed,” Taggart said Wednesday during the Atlantic Coast Conference’s preseason media days. “And I expect we’ll do those things.”

That rough first season has led to at least some question about Taggart’s long-term future at FSU. Taggart was asked what his reaction is when he sees is name on the “hot seat.”

“I don’t see that, and I’m sure nobody will come tell me that,” he said. “But I hear it when I talk to you all or you ask that question. That’s part of the business. We all know what we were signing up for when we decided to become coaches. That’s part of the whole landscape of it, where you talk about guys’ jobs and whether they’re on the hot seat or not. But you can’t focus on that, you’ve got to stay locked in to what you’re doing.”

Simpson decided to sport a blonde wig to resemble the popular quarterback’s signature long-haired look, knowing everyone would probably rather talk to Lawrence. The Tigers posted a video of Simpson trying on the wig on their football Twitter site.

“I’m kind of glad people don’t know my name,” Simpson said with a laugh. “I mean, I’m an offensive lineman. You’re not supposed to know my name. … I’m going to have fun with it.”

Sure, the 330-pound Simpson doesn’t look a whole lot like Lawrence, but he had the hair flip down.

“Yeah, I’ve got some clout now, I’ve got a lot of clout,” Simpson said. “A lot of people have put me all over social media. I thought it was cool.”

North Carolina State coach Dave Doeren has had the security in recent years of knowing he had an experienced quarterback in Ryan Finley. Now Finley is gone to the NFL, and Doeren will have to figure out who is his new starter after consecutive nine-win seasons.

Doeren said he is waiting to see which QB improves the most over the summer, gains the command of the offense and the trust of his teammates before making any type of a decision. He said he has no timetable for naming a starter.

While Matt McKay would seem to have the inside track given he’s been in the system for the last two seasons, Doeren says he doesn’t want to sell the other competitors short and said with a shrug: “We have options.”

Scott Satterfield should have no problem getting his team’s attention this summer. That’s because Louisville will be opening the season with a tough game at home against national power Notre Dame in Satterfield’s debut with the Cardinals.

“It’s awesome,” Satterfield said. “To be able to play a team like Notre Dame the first game, to be on Monday night, national TV, it’s going to be pretty cool. But you got to stay in the moment. You got to do your job. … Obviously one day when you look back, you’re going to say, ‘Man, that was an awesome moment.’ Obviously that’s one that I’ll cherish.”

By Mike London mike.london@salisburypost.com GRANITE QUARRY — Even in what was viewed as a down season in 2019, East Rowan... read more