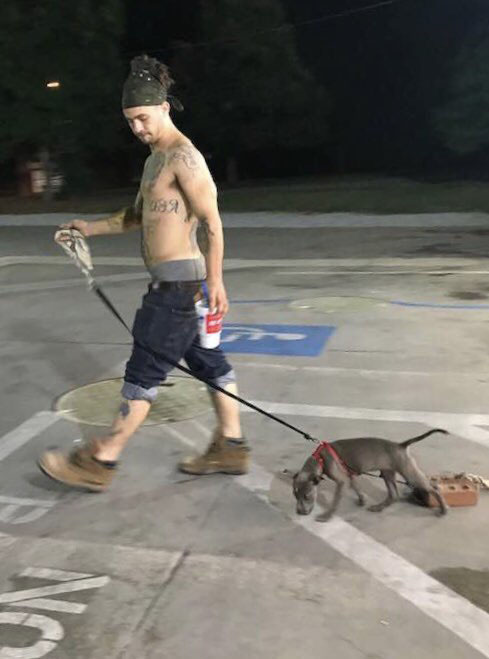 Scottie Lee Lewis is shown in a photo that has gone viral that shows the 28-year-old Rockwell resident walking a puppy dragging a brick behind it. Lewis has now been cited for misdemeanor animal cruelty. Submitted photo

ROCKWELL — A Rockwell man was cited for animal cruelty after a photo went viral showing him walking a puppy on a leash with a brick attached to the dog, according to Rockwell Police Chief Hugh Bost.

Scottie Lee Lewis, 28, was issued a misdemeanor citation this week by the Rockwell Police Department after an investigation that started last week when a photo was circulated on Facebook.

Someone called police last Wednesday to report that Lewis had left the Circle K store at 264 E. Main St. with the puppy on a leash or harness. The puppy was dragging a brick on a rope behind him, Bost said. The caller sent a photo to the Police Department, which asked Rowan County Animal Control to check on the dog’s welfare

Both agencies investigated the report. Bost said police officers accompanied Animal Control officers to check on the dog Thursday. Bost said Lewis told the officers that he was “strength training” the young puppy and “he wanted to make him look muscular.”

Bost said Animal Control officers left the dog with Lewis when they did not find any obvious signs of abuse or markings. But they told Lewis he needed to take the dog to a veterinarian to get shots and present those papers to Animal Control. Bost consulted the Rowan County District Attorney’s Office, which recommended an animal cruelty citation based on the video and Lewis’ interview with authorities.

Bost said investigators believed the dog was too young for “strength training” and felt the puppy was being “overloaded or overworked.”

Bost said he has to speak further with Animal Control officers to determine if Lewis did as he was instructed.

Rowan County Animal Control Director Bob Pendergrass said Lewis told him the dog was stolen from his yard. The theft, however, had not been reported to Rockwell police as of Tuesday morning, Bost said.

Lewis faces pending 2019 charges for possession of stolen goods and robbery with a dangerous weapon. He also has two pending 2018 charges for probation violation and driving with a revoked license.

NC trial looks at partisan bias after US justices won’t