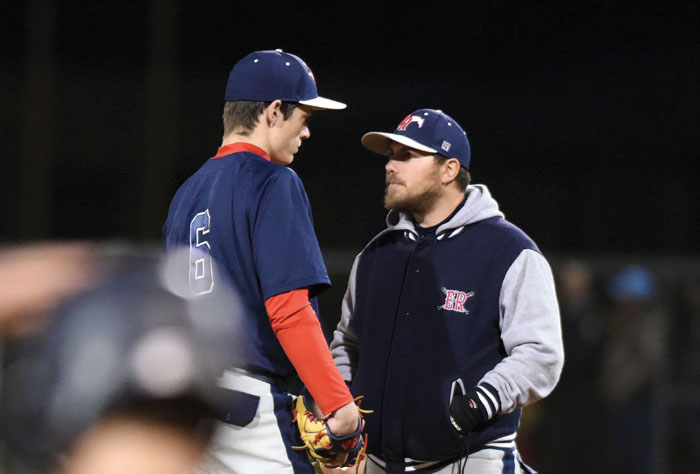 JON C. LAKEY FILE PHOTO/ SALISBURY POST ... Brett Hatley, right, East Rowan’s pitching coach during this game against Carson in 2016, speaks with Hayden Setzer (6) on the mound. Hatley has been promoted to head coach at East.

GRANITE QUARRY — Even in what was viewed as a down season in 2019, East Rowan baseball was 17-11 overall, tied for second in the North Piedmont Conference and ranked by MaxPreps as the 14th-best team in 3A and one of the state’s top 50, regardless of classification.

Football and boys basketball have wandered through ups and downs over the years in Granite Quarry, but East fans always look forward to spring with unflagging optimism. When the birds start singing, the Mustangs start winning. They’re never bad at baseball.

“It’s exciting for my first head-coaching position to be with a program like this,” Hatley said. “I’m very fortunate. We’ve got some talent. We’ve got young talent coming up and older talent coming back.”

An assistant at East since he was hired in 2012 by then-principal Kelly Sparger, Hatley follows Brian Hightower, who was at the helm for 15 exciting and occasionally tumultuous seasons. Hightower suffered just one losing season in those 15 years, and even his 12-14 year in 2013 was hardly a disaster. That team went 8-4 in conference games and took second place.

In Hightower’s 15 seasons, East finished first or second 12 times. That’s quite a legacy.

But long before Hightower arrived from Statesville, East won in baseball. The Mustangs have won 900 games since they made their diamond debut in the spring of 1960. East has won 69 percent of its games over a 60-year period. That’s the best winning percentage of any of the high schools in a county that lives and breathes baseball.

Hatley has a perfect baseball background. His strong playing career was spent learning from two of the top coaches in county history.

Hatley’s high school ball was played at West Rowan. He played a little on the varsity in 2003 as a freshman. Then, for the next three seasons, he was one of the standouts on stout teams  coached by Chris Cauble.  The 2004 Falcons won a school-record 29 games and finished as 3A state runner-up. Hatley hit 11 homers in his high school career, drove in 72 runs and batted  a stellar .402.

“Watching Coach Cauble is what made me want to be a coach,” Hatley said. “I knew when I was sophomore in high school that’s what I wanted to do as a career. I could see that being a P.E. teacher and coach gave you a lot of opportunities to work with students and athletes and help them get better. I could see that it could be a pretty good life.”

Hatley enjoyed a tremendous senior season for Cauble in 2006 as a two-way player, batting .421 with seven homers and 30 RBIs and going 7-2 on the mound. That effort earned him the Mark Norris Memorial Award as Rowan County Player of the year.

“As a very young player, I learned a whole lot of baseball, soaked up knowledge from Coach Cauble, and then I played four summers for Jim Gantt’s Rowan County American Legion teams, plus four more years for him at Catawba,” Hatley said. “Coach Gantt is one of the best there is. His coaching style was always that you do things the right way or you’re not in the lineup, and that’s something I believe in.”

At Catawba, he slugged 14 homers in his career, drove in 87 runs and batted .308.  He was voted first team DH on the All-South Atlantic Conference team in 2008.

Hatley served in a lot of different roles in his playing career. There were years when he was a star and years when he was just one of the guys on Catawba teams blessed with all-time greats such as Jerry Sands and David Thomas. He learned how to handle both of those roles.

At different times in his playing career, Hatley was a corner infielder, a middle infielder, a pitcher and an outfielder. Learning the intricacies and nuances of all those positions helped build a solid baseball foundation.

“I learned the game and knew the game well as a player, but then I’ve learned so much more as an assistant coach from the older coaches at East,” Hatley said. “There are some things that you can only learn by doing, things like preparing for games and making in-game decisions.”

With Hightower suspended, Hatley was placed in charge for East late in the 2019 season, including a first-round playoff victory against Tuscola.

Baseball coaching has changed dramatically over the years. It’s no longer a spring job. East players have gotten used to working at baseball 11 months a year, taking only August off. Most play fall baseball and summer baseball (American Legion or showcase) in addition to the standard spring season.

“Baseball is almost year-round now, and fundraising has also become a big part of a coach’s responsibilities,” Hatley said.

Hatley has been an important assistant coach for East football — he was a receiver in his playing days at West Rowan — but he’ll be focused exclusively on baseball now.

His other priority is his family. He’s been married for four years to Carla Powers Hatley, who was a star athlete for North Rowan volleyball teams.  They welcomed their first child eight weeks ago.

“Seeing that first child born was a lot bigger deal than anything I ever accomplished in baseball,” Hatley said. “I can’t think of a greater moment in my life.”

With returning all-county players Jake Hunter, Wayne Mize and Charlie Klingler East should be able to compete with anyone.

“That’s what our expectations are,” Hatley said. “The guys are excited about the future.”