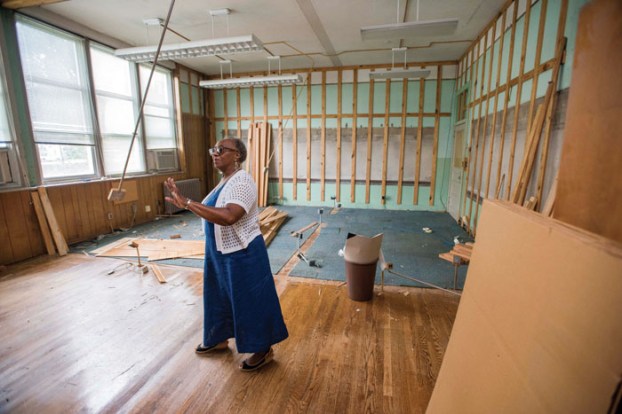 JON C. LAKEY/SALISBURY POST East Spencer Mayor Barbara Mallett walks through one of the classrooms that was taken back to the original construction so that evaluators could see the condition of the original building materials. Mallett and town manager Phil Conrad were joined by Kenny Clement on Friday morning for a tour of the town's property across the street from the city hall on Long Street. The Town of East Spencer acquired the former Rowan Salisbury School administration building a few years earlier and has hopes that the building can be adapted for reuse that will help anchor the vision of a downtown for the small Rowan County town. East Spencer, NC 7/12/19

Laurel to the town of East Spencer for being proactive about redeveloping the former site of a Rowan-Salisbury Administration building on Long Street.

The building, which dates back to the early 1900s, has been without a permanent tenant since being vacated by the school system in conjunction with the Wallace Educational Forum’s construction. School staff moved from East Spencer to downtown Salisbury. And the town purchased the building in 2016.

It still has plenty of potential. A developer out of Winston-Salem was considering renovating the property for senior housing last year but stopped short after not receiving tax credits, reporter Shavonne Walker wrote in Sunday’s Post (“Former RSS building in East Spencer ready for development”). The UNC School of Government’s Development Finance Initiative also studied whether it could be used as residential, office and retail space.

We’re hopeful that a developer will pursue redevelopment because the building is in the heart of East Spencer. And if bustling with activity, we suspect the entire town would benefit.

Laurel to Laurie and Rusty Shuping, who do their part to spread a little joy to strangers through an acre-sized sunflower field.

The Shupings invite passersby to take photos dawn to dusk at the field of flowers they’ve grown. And starting Monday, people were also able to cut down flowers to keep.

The Shupings placed a donation box nearby for Open Heart Global Ministries, which makes missions trips to Ecuador and builds churches, operates a seminary, developers greenhouses and provides various supplies to folks who live in the country.

We could use more people like Laurie and Rusty Shuping in the world.

Laurel to the foster parents, social workers, counselors and others who work tirelessly to serve children and teens in foster care.

The reason? The opioid crisis was offered by the Children’s Hope Alliance’s Marc Murphy. Though, other reasons might be that adults are less likely than they used to be to take in a foster child. In Rowan, there are 56 foster homes and 173 children, meaning that some have to be housed outside of the county.

Social work is far from an easy job, especially when it requires staying overnight at the office because a child could not be placed by the end of the day. Those who work in the field do it because of a passion to make a difference in the lives of vulnerable children and they deserve much more praise than they receive on a daily basis.

Contrary to statements by legislative leaders, the ongoing stalemate over the state budget is a good thing. After Gov. Roy... read more